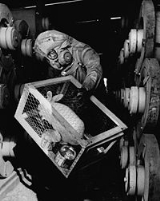 Also known as Tsarin or Zarin.
Sarin is a chiral molecule
Chirality (chemistry)
A chiral molecule is a type of molecule that lacks an internal plane of symmetry and thus has a non-superimposable mirror image. The feature that is most often the cause of chirality in molecules is the presence of an asymmetric carbon atom....
(typically racemic
Racemic
In chemistry, a racemic mixture, or racemate , is one that has equal amounts of left- and right-handed enantiomers of a chiral molecule. The first known racemic mixture was "racemic acid", which Louis Pasteur found to be a mixture of the two enantiomeric isomers of tartaric acid.- Nomenclature :A...
), with four substituents attached to the tetrahedral phosphorus center
Tetrahedral molecular geometry
In a tetrahedral molecular geometry a central atom is located at the center with four substituents that are located at the corners of a tetrahedron. The bond angles are cos−1 ≈ 109.5° when all four substituents are the same, as in CH4. This molecular geometry is common throughout the first...
.