Sant'Agata dei Goti is a church in Rome
Rome
Rome is the capital of Italy and the country's largest and most populated city and comune, with over 2.7 million residents in . The city is located in the central-western portion of the Italian Peninsula, on the Tiber River within the Lazio region of Italy.Rome's history spans two and a half...
, Italy, dedicated to the martyr Saint Agatha
Agatha of Sicily
Saint Agatha of Sicily is a Christian saint. Her memorial is on 5 February. Agatha was born at Catania, Sicily, and she was martyred in approximately 251...
. It is currently the titular church assigned to Cardinal Raymond Leo Burke
Raymond Leo Burke
Raymond Leo Burke is an American Cardinal of the Holy Roman Church. He is the current Cardinal Prefect of the Supreme Tribunal of the Apostolic Signatura, having previously served as Archbishop of St...
, currently Prefect of the Supreme Tribunal of the Apostolic Signatura.

The church was built by Ricimer
Ricimer
Flavius Ricimer was a Germanic general who achieved effective control of the remaining parts of the Western Roman Empire, during the middle of the 5th century...
for the Goths
Goths
The Goths were an East Germanic tribe of Scandinavian origin whose two branches, the Visigoths and the Ostrogoths, played an important role in the fall of the Roman Empire and the emergence of Medieval Europe....
c. 460. The Goths were Arians
Arianism
Arianism is the theological teaching attributed to Arius , a Christian presbyter from Alexandria, Egypt, concerning the relationship of the entities of the Trinity and the precise nature of the Son of God as being a subordinate entity to God the Father...
, so when Arianism was suppressed in Rome, the building was taken over by the Catholic Church, in 592 or 593, and reconsecrated by Pope Gregory the Great. It was restored in the 16th and 17th century. It is the only Arian church that has been preserved in Rome.

It was restored in the 9th century, and a Benedictine monastery was founded next to it.

The apse
Apse
In architecture, the apse is a semicircular recess covered with a hemispherical vault or semi-dome...
of the church collapsed in 1589, and it was partially rebuilt in 1633, without major changes to the building itself apart from the new apse. The small courtyard outside the church was laid out at this time. The church has been served by the Stigmatines
Stigmatines
The Congregation of the Sacred Stigmata was founded by St. Gaspar Bertoni in Verona, Italy, in 1816.The first written Constitutions for the Congregation was based on the Constitutions of St...
since 1926. Their generalate is adjacent to it. 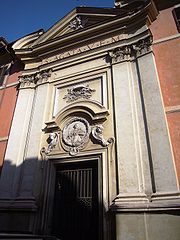 The façade was rebuilt by Francesco Ferrari
Francesco Ferrari (painter)
Francesco Ferrari was an Italian painter and architect of the Baroque period, active in Ferrara and across Northern Italy and Vienna....
in 1729. The relief above the door shows St. Agatha holding her severed breast on a plate; her torturers severed her breasts when she refused to renounce her faith in Christ.

The entrance from Via Mazzarino opens on 17th century courtyard. From 1836 to 1926, it belonged to the Irish College. Cardinal Paul Cullen, a former Rector of the Irish College, modelled the church of the Holy Cross College in Clonliffe in Dublin on the plans of St Agatha's. The Romanesque campanile was built in the 12th century.

Although it was redecorated in the Baroque style and has some 19th century additions, it is still possible to see traces of the 5th century plan, which was a basilica
Basilica
The Latin word basilica , was originally used to describe a Roman public building, usually located in the forum of a Roman town. Public basilicas began to appear in Hellenistic cities in the 2nd century BC.The term was also applied to buildings used for religious purposes...
with three naves
Navès
Navès is a commune in the Tarn department in southern France.-Geography:The Thoré forms most of the commune's north-eastern border, then flows into the Agout, which forms part of its northern border.-References:*...
. The granite columns separating the naves are ancient.

The fresco
Fresco
Fresco is any of several related mural painting types, executed on plaster on walls or ceilings. The word fresco comes from the Greek word affresca which derives from the Latin word for "fresh". Frescoes first developed in the ancient world and continued to be popular through the Renaissance...
in the apse shows the Glory of St Agatha, made by Paolo Gismondi in the 17th century. There is a 12th or 13th century canopy
Baldachin
A baldachin, or baldaquin , is a canopy of state over an altar or throne. It had its beginnings as a cloth canopy, but in other cases it is a sturdy, permanent architectural feature, particularly over high altars in cathedrals, where such a structure is more correctly called a ciborium when it is...
above the altar, reassembled and erected here in 1933. It has four columns of pavonazzetto
Breccia
Breccia is a rock composed of broken fragments of minerals or rock cemented together by a fine-grained matrix, that can be either similar to or different from the composition of the fragments....
marble, all decorated with Cosmatesque
Cosmatesque
Cosmatesque, or Cosmati, is a style of geometric decorative inlay stonework typical of Medieval Italy, and especially of Rome and its surroundings. It was used most extensively for the decoration of church floors, but was also used to decorate church walls, pulpits, and bishop's thrones...
mosaic
Mosaic
Mosaic is the art of creating images with an assemblage of small pieces of colored glass, stone, or other materials. It may be a technique of decorative art, an aspect of interior decoration, or of cultural and spiritual significance as in a cathedral...
, and a temple roof. The former canopy was destroyed in 1589; fragments can be seen in the ceiling of the main chapel on the left-hand side.

The 15th century Cosmatesque pavement in the middle of the nave has an unusual, but very nice, design. It is a very late example of the style. The rectangular windows were installed in the 17th century at the request of the Cardinals Francesco
Francesco Barberini (seniore)
Francesco Barberini was an Italian Catholic Cardinal. The nephew of Pope Urban VIII , he benefited immensely from the nepotism practiced by his uncle...
and Antonio Barberini
Antonio Barberini
Antonio Barberini was an Italian Catholic cardinal, Archbishop of Reims, military leader, patron of the arts and a prominent member of the House of Barberini. As one of the cardinal-nephews of Pope Urban VIII and a supporter of France, he played a significant role at a number of the papal...
. By the altar of St Agatha is a large statue of the saint.

The feast of the Greek martyrs whose relics are preserved here is on 2 December. It is usually celebrated with an evening Mass with the liturgy of the Byzantine Catholic rite.

Other important feasts are that of St Agatha on 5 February and St Gaspar Bertoni
Gaspar Bertoni
Saint Gaspar Louis Bertoni is venerated as a saint by the Catholic Church. He was the founder of the Stigmatines.-External links:...
, founder of the Stigmatines, on 12 June.
The source of this article is wikipedia, the free encyclopedia.  The text of this article is licensed under the GFDL.