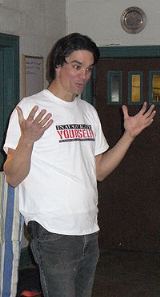 Encyclopedia
Sander Hicks is the founder
Entrepreneur
An entrepreneur is an owner or manager of a business enterprise who makes money through risk and initiative.The term was originally a loanword from French and was first defined by the Irish-French economist Richard Cantillon. Entrepreneur in English is a term applied to a person who is willing to...
of Soft Skull Press
Soft Skull Press
Soft Skull Press is an independent publisher founded by Sander Hicks in 1992, and run by Richard Eoin Nash from 2001 to 2009. In 2007, Nash sold Soft Skull to Counterpoint LLC, where it continues to function as a division of the press...
, and Vox Pop Inc. Raised in the DC area, he is the son of Norman Hicks, a progressive economist and anti-poverty specialist, who is retired from the World Bank organization. Raised Catholic, Sander attended Bishop Ireton High School, where he graduated with honors. During the Gulf War, he transferred from James Madison University to Eugene Lang College, of New School University in New York City.

In 1999, Soft Skull Press won awards for "Outstanding Independent Publisher of the Year" when Hicks was at the helm. The award followed Hicks's acquisition and publication of the controversial Bush biography Fortunate Son, by James Hatfield
James Hatfield
James Howard Hatfield was an American author.- Fortunate Son and controversy :Hatfield was the author of Fortunate Son, a book which alleges that George W...
. Hicks, Hatfield, and Soft Skull Press enjoyed positive media coverage in Newsweek, 60 Minutes, Court TV, and the Washington Post. However, in one article in the New York Press, Hicks was accused of not paying his authors during this time. However, no authors went on the record for these allegations.

9/11 Truth and a Senate Campaign

In his journalism and his 2005 book, The Big Wedding: 9/11, the Whistle-Blowers, and the Cover-Up, Hicks levies serious questions about the official account of the September 11th Attacks. Hicks reviewed the 9/11 Commission report, critically, for the New York Press.

In January, 2009, Sander Hicks and Chic Migeot hosted a series of "speakouts, as part of a caravan headed to D.C." for the Inauguration of Barack Obama
Barack Obama
Barack Hussein Obama II is the 44th and current President of the United States. He is the first African American to hold the office. Obama previously served as a United States Senator from Illinois, from January 2005 until he resigned following his victory in the 2008 presidential election.Born in...
. Under the banner "Inaugurate Yourself!", the caravan and speaking tour stopped in several U.S. cities with the intention to "gather fellow rebels and radicals, spiritual people and political instigators, people who want to speak out." Hicks described his campaign as "Three New Ideas" in which he called for:

Sander Hicks is a political activist and urges the American people to uncover the truth behind political corruption. In his new political party, the Truth Party, Hicks aims to take the USA back to its original roots and admires the kind of activism found in Martin Luther King Jr, Caesar Chavez, and Thomas Jefferson
Thomas Jefferson
Thomas Jefferson was the principal author of the United States Declaration of Independence and the Statute of Virginia for Religious Freedom , the third President of the United States and founder of the University of Virginia...
.
This party now has official representation in Boston, New York City, Chicago, Madison, and Austin, Texas. The Three Virtues of the Truth Party include:

Much of Hicks's writing focuses on investigating secrets of the government, revealing them, and disclosing the information to the American people.