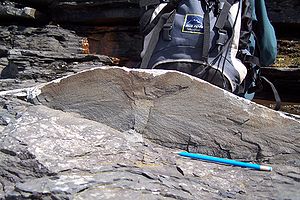 A sand volcano or sand blow is a cone of sand
Sand
Sand is a naturally occurring granular material composed of finely divided rock and mineral particles.The composition of sand is highly variable, depending on the local rock sources and conditions, but the most common constituent of sand in inland continental settings and non-tropical coastal...
formed by the ejection of sand onto a surface from a central point. The sand builds up as a cone
Cone (geometry)
A cone is an n-dimensional geometric shape that tapers smoothly from a base to a point called the apex or vertex. Formally, it is the solid figure formed by the locus of all straight line segments that join the apex to the base...
with slopes at the sand's angle of repose
Angle of repose
The angle of repose or, more precisely, the critical angle of repose, of a granular material is the steepest angle of descent or dip of the slope relative to the horizontal plane when material on the slope face is on the verge of sliding. This angle is in the range 0°–90°.When bulk granular...
. A crater
Volcanic crater
A volcanic crater is a circular depression in the ground caused by volcanic activity. It is typically a basin, circular in form within which occurs a vent from which magma erupts as gases, lava, and ejecta. A crater can be of large dimensions, and sometimes of great depth...
is commonly seen at the summit
Summit (topography)
In topography, a summit is a point on a surface that is higher in elevation than all points immediately adjacent to it. Mathematically, a summit is a local maximum in elevation...
. The cone looks like a small volcanic cone
Volcanic cone
Volcanic cones are among the simplest volcanic formations. They are built by ejecta from a volcanic vent, piling up around the vent in the shape of a cone with a central crater. Volcanic cones are of different types, depending upon the nature and size of the fragments ejected during the eruption...
and can range in size from millimetres to metres in diameter.

These are to be contrasted with mud volcano
Mud volcano
The term mud volcano or mud dome are used to refer to formations created by geo-excreted liquids and gases, although there are several different processes which may cause such activity. Hot water mixes with mud and surface deposits. Mud volcanoes are associated with subduction zones and about 700...
es which occur in areas of geyser
Geyser
A geyser is a spring characterized by intermittent discharge of water ejected turbulently and accompanied by a vapour phase . The word geyser comes from Geysir, the name of an erupting spring at Haukadalur, Iceland; that name, in turn, comes from the Icelandic verb geysa, "to gush", the verb...
or subsurface gas venting.
The source of this article is wikipedia, the free encyclopedia.  The text of this article is licensed under the GFDL.