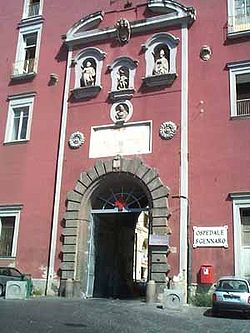 San Gennaro dei Poveri is a hospital in Naples
Naples
Naples is a city in Southern Italy, situated on the country's west coast by the Gulf of Naples. Lying between two notable volcanic regions, Mount Vesuvius and the Phlegraean Fields, it is the capital of the region of Campania and of the province of Naples...
in southern Italy.

Historically, San Gennaro dei Poveri was the first Hospice for the Poor in Naples. It was founded in 1667 and intended to be a great "poor house", a place for at least some of the city's 10,000 mendicant poor at the time. It was a forerunner of the much more ambitious project along the same lines, the gigantic Royal Hospice for the Poor started in the 1750s.
The source of this article is wikipedia, the free encyclopedia.  The text of this article is licensed under the GFDL.