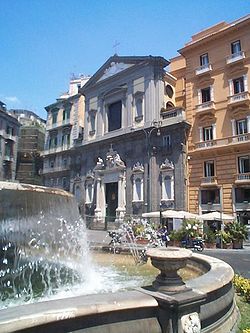 San Ferdinando is a southern district of Naples
Naples
Naples is a city in Southern Italy, situated on the country's west coast by the Gulf of Naples. Lying between two notable volcanic regions, Mount Vesuvius and the Phlegraean Fields, it is the capital of the region of Campania and of the province of Naples...
, with a population of about 18,000.

San Ferdinando district includes, among the various landmarks, the Royal Palace
Royal Palace (Naples)
The Royal Palace is a palace in Naples, southern Italy. It is one of the four residences used by the Bourbon Kings of Naples during their rule of the Kingdom of Two Sicilies : one is in Caserta, another on the Capodimonte hill overlooking Naples, and the third is in Portici on the slopes of...
, Piazza del Plebiscito
Piazza del Plebiscito
Piazza Plebiscito is one of the largest squares in Naples. It is named for the plebiscite taken on October 2 in 1860 that brought Naples into the unified Kingdom of Italy under the House of Savoy...
(the most celebrated square of Naples), the San Carlo opera house
Teatro di San Carlo
The Real Teatro di San Carlo is an opera house in Naples, Italy. It is the oldest continuously active such venue in Europe.Founded by the Bourbon Charles VII of Naples of the Spanish branch of the dynasty, the theatre was inaugurated on 4 November 1737 — the king's name day — with a performance...
and the church of San Ferdinando, from which the district is named.

The district begun to develop during the 16th century, when the Spanish built a first Vice-Roy palace, then replaced by the new Royal Palace by Domenico Fontana. In the following decades, he district became the most desired area of Naples by the city aristocracy because of its proximity to the court, and subsequently many villas and palaces were edified there.
The source of this article is wikipedia, the free encyclopedia.  The text of this article is licensed under the GFDL.