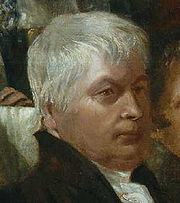 Samuel Gurney was an English
England
England is a country that is part of the United Kingdom. It shares land borders with Scotland to the north and Wales to the west; the Irish Sea is to the north west, the Celtic Sea to the south west, with the North Sea to the east and the English Channel to the south separating it from continental...
banker and philanthropist
Philanthropist
A philanthropist is someone who engages in philanthropy; that is, someone who donates his or her time, money, and/or reputation to charitable causes...
.
He should not be confused with his second son, Samuel (1816–1882), also described as banker and philanthropist, and a Member of Parliament.

Gurney was educated at Wandsworth
Wandsworth
Wandsworth is a district of south London, England, in the London Borough of Wandsworth. It is situated southwest of Charing Cross. The area is identified in the London Plan as one of 35 major centres in Greater London.-Toponymy:...
, Surrey, and at Hingham, Norfolk
Hingham, Norfolk
Hingham is a market town and civil parish in the Forehoe district in the heart of rural Norfolk, in England. The civil parish covers an area of and had a population of 2,078 in 944 households as of the 2001 census. Grand architecture surrounds the market place and village green...
. Among his siblings were Joseph John Gurney
Joseph John Gurney
Joseph John Gurney was a banker in Norwich, England and an evangelical Minister of the Religious Society of Friends , whose views and actions led, ultimately, to a schism among American Quakers.-Biography:...
, Daniel Gurney
Daniel Gurney
Daniel Gurney , was an English banker and antiquary.Gurney was born at Earlham Hall, near Norwich, on 9 March 1791. He was youngest son of John Gurney of Earlham, Norfolk, and brother of Elizabeth Fry, the philanthropist, Louisa Gurney Hoare, the writer on education, and Joseph John Gurney and...
(1791–1880), Elizabeth Fry
Elizabeth Fry
Elizabeth Fry , née Gurney, was an English prison reformer, social reformer and, as a Quaker, a Christian philanthropist...
, Louisa Hoare
Louisa Gurney Hoare
-Early life:Louisa Gurney, born on 25 September 1784, was the seventh of the eleven children of John Gurney of Earlham Hall near Norwich, a Quaker, and of Catherine Bell . Her father inherited ownership of Gurney's Bank in Norwich...
(1784–1836), the wife of Samuel Hoare
Samuel Hoare Jr
Samuel Hoare Jr was a wealthy British Quaker merchant and abolitionist born in Stoke Newington, the north of London. He was one of the twelve founding members of the Society for the Abolition of the Slave Trade.-Background:...
, and Hannah Buxton, the wife of Sir Thomas Buxton. At the age of fourteen, Gurney was placed in the counting-house of his brother-in-law, Joseph Fry (1777–1861), a tea merchant and banker, at St Mildred's Court, Poultry, in the City of London.

On 7 April 1808, Gurney married Elizabeth, daughter of James Sheppard of Ham House
West Ham Park
West Ham Park is a public park in the London Borough of Newham. Spanning , the park has been managed by the City of London Corporation since 1874. Previously it was the grounds of Ham House, owned by the Gurney family and demolished in 1872...
, Upton, Essex
Essex
Essex is a ceremonial and non-metropolitan county in the East region of England, and one of the home counties. It is located to the northeast of Greater London. It borders with Cambridgeshire and Suffolk to the north, Hertfordshire to the west, Kent to the South and London to the south west...
, a handsome residence that descended in 1812 to the young couple, and was their abode for nearly the whole of their married life. They had three sons and six daughters.

The wealth that came to Gurney from his father-in-law, as well as that bequeathed to him by his father, helped him to rapid progress as a partner in Richardson & Overend, with which firm he had become connected in 1807. This business had been founded in 1800 by Thomas Richardson, clerk to a London bill-discounter, and John Overend, chief clerk in the bank of Smith, Payne & Company at Nottingham
Nottingham
Nottingham is a city and unitary authority in the East Midlands of England. It is located in the ceremonial county of Nottinghamshire and represents one of eight members of the English Core Cities Group...
, the Gurneys supplying the capital. At that time bill-discounting was carried on in a spasmodic fashion by the ordinary merchant in addition to his regular business, but Richardson considered that there was room for a London house which should devote itself entirely to the trade in bills. This, at that time, novel idea proved an instant success.

On his father's death in 1809, Samuel Gurney assumed the control of the Norwich bank. At the same time, he took control of Richardson & Overend. The title of that firm was subsequently changed to Overend, Gurney and Company
Overend, Gurney and Company
Overend, Gurney & Company was a London wholesale discount bank, known as "the bankers' bank", which collapsed in 1866 owing about 11 million pounds, equivalent to £981 million at 2008 prices.-Early years:...
. Very soon after his entering the firm, it began to assume gigantic proportions, and it was for about forty years the largest discounting house in the world. At first only discounting bills, it soon came to lending money on all sorts of securities. In the panic of 1825, the firm were able to lend money to many houses to tide them over their difficulties; this brought them into even greater favour. Gurney became known as "the bankers' banker", and many firms who had previously dealt with the Bank of England
Bank of England
The Bank of England is the central bank of the United Kingdom and the model on which most modern central banks have been based. Established in 1694, it is the second oldest central bank in the world...
now commenced depositing their surplus cash in his hands. At the time of Gurney's death in 1856, it was calculated that this house held deposits amounting to eight million pounds sterling.

During the later years of his life, charitable and philanthropic undertakings almost monopolized Gurney's attention.

Penal reform and criminal justice
Gurney took a part in the efforts of Joseph John Gurney, Fowell Buxton, and Elizabeth Fry
Elizabeth Fry
Elizabeth Fry , née Gurney, was an English prison reformer, social reformer and, as a Quaker, a Christian philanthropist...
for the improvement of prison discipline and the reform of the criminal code. He refused to prosecute a man who had forged his name, knowing well that death was the punishment for such an offence.

Gurneu attended the 1840 anti-slavery convention in London and he was a prime figure in the painting which is now in the National Portrait Gallery in London. He is in the foreground of the painting on the left.

Africa
He also interested himself in the Niger expedition. In March 1841 he entertained Captain H. D. Trotter, Commander W. Allen, and a large number of the officers of the expedition at a farewell dinner at Upton.

Gurney was a very liberal patron of the infant colony of Liberia
Liberia
Liberia , officially the Republic of Liberia, is a country in West Africa. It is bordered by Sierra Leone on the west, Guinea on the north and Côte d'Ivoire on the east. Liberia's coastline is composed of mostly mangrove forests while the more sparsely populated inland consists of forests that open...
, kept up a correspondence with President Roberts
Joseph Jenkins Roberts
Joseph Jenkins Roberts was the first and seventh President of Liberia. Born free in Norfolk, Virginia, USA, Roberts emigrated to Liberia in 1829 as a young man. He opened a trading store in Monrovia, and later engaged in politics...
, and for his many gifts was rewarded by his name being given to a town of Gallenas in 1851.

In 1849, Gurney undertook a tour of Ireland, where he made considerable gifts to poor people still suffering from the effects of the famine.

Peace mission to France
In 1853 he accompanied a deputation sent to Napoleon III to express a desire for a long continuance of peace and amity between England and France.

Poplar hospital
On the initiative of Gurney, the Poplar
Poplar, London
Poplar is a historic, mainly residential area of the East End of London in the London Borough of Tower Hamlets. It is about east of Charing Cross. Historically a hamlet in the parish of Stepney, Middlesex, in 1817 Poplar became a civil parish. In 1855 the Poplar District of the Metropolis was...
Hospital for Accidents, the first casualty hospital for dockworkers, was opened in 1855.

His wife died at Ham House, Essex, 14 February. 1855, and in the autumn of that year, his own health being much broken, he took up his residence at Nice
Nice
Nice is the fifth most populous city in France, after Paris, Marseille, Lyon and Toulouse, with a population of 348,721 within its administrative limits on a land area of . The urban area of Nice extends beyond the administrative city limits with a population of more than 955,000 on an area of...
. Getting worse in the spring of 1856, he hurried homewards, desiring to end his days in his own country among his kindred. He reached Paris, but could go no further, and died in an hotel in that city on 5 June 1856. He was buried in the Friends' cemetery at Barking
Barking
Barking is a suburban town in the London Borough of Barking and Dagenham, in East London, England. A retail and commercial centre situated in the west of the borough, it lies east of Charing Cross. Barking was in the historic county of Essex until it was absorbed by Greater London. The area is...
on 19 June, when an immense concourse of people attended the funeral. He left nine children and upwards of forty grandchildren, but his eldest son, John Gurney
John Gurney
John Gurney may refer to:* Sir John Gurney , English judge* John Gurney , proprietor of Gurney's Bank and father of Joseph John Gurney...
of Earlham Hall, did not long survive, dying September 23, 1856. Gurney was the author of a pamphlet To the Electors of South Essex 1852, in which he recommended the election of his son-in-law Sir Edward North Buxton
Sir Edward Buxton, 2nd Baronet
Sir Edward North Buxton, 2nd Baronet was a British Liberal Party politician.He was the son of Sir Thomas Fowell Buxton and his wife, Hannah Gurney...
.

The great commercial establishment of Overend, Gurney & Co, which Gurney had brought to a position of unexampled wealth and influence, after passing into less competent hands, was reorganised as a joint-stock company in August 1865, and failed on 10 May 1866, when the liabilities amounted to eleven millions, ruining some of the Gurneys as well as numerous investors. Gurneys Bank and most of the Gurney family, however, escaped loss.
The source of this article is wikipedia, the free encyclopedia.  The text of this article is licensed under the GFDL.