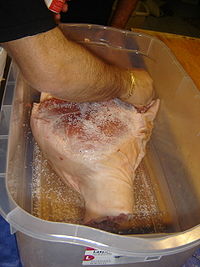 Salting is the preservation of food with dry edible salt
Edible salt
Salt, also known as table salt, or rock salt, is a mineral that is composed primarily of sodium chloride , a chemical compound belonging to the larger class of ionic salts. It is essential for animal life in small quantities, but is harmful to animals and plants in excess...
. It is related to pickling
Pickling
Pickling, also known as brining or corning is the process of preserving food by anaerobic fermentation in brine to produce lactic acid, or marinating and storing it in an acid solution, usually vinegar . The resulting food is called a pickle. This procedure gives the food a salty or sour taste...
(preparing food with brine
Brine
Brine is water, saturated or nearly saturated with salt .Brine is used to preserve vegetables, fruit, fish, and meat, in a process known as brining . Brine is also commonly used to age Halloumi and Feta cheeses, or for pickling foodstuffs, as a means of preserving them...
, i.e. salty water). It is one of the oldest methods of preserving food, and two historically significant salt-cured foods are dried and salted cod
Dried and salted cod
Dried and salted cod, often called salt cod or clipfish , is cod which has been preserved by drying after salting. Cod which has been dried without the addition of salt is called stockfish....
(usually referred to as salt fish) and salt-cured meat
Salt-cured meat
Salt-cured meat or salted meat, for example bacon and kippered herring, is meat or fish preserved or cured with salt. Salting, either with dry salt or brine, was the only widely available method of preserving meat until the 19th century...
.

Salting is used because most bacteria
Bacteria
Bacteria are a large domain of prokaryotic microorganisms. Typically a few micrometres in length, bacteria have a wide range of shapes, ranging from spheres to rods and spirals...
, fungi and other potentially pathogenic organism
Organism
In biology, an organism is any contiguous living system . In at least some form, all organisms are capable of response to stimuli, reproduction, growth and development, and maintenance of homoeostasis as a stable whole.An organism may either be unicellular or, as in the case of humans, comprise...
s cannot survive in a highly salty environment, due to the hypertonic
Tonicity
Tonicity is a measure of the osmotic pressure gradient of two solutions separated by a semipermeable membrane. It is commonly used when describing the response of cells immersed in an external solution...
nature of salt. Any living cell in such an environment will become dehydrated through osmosis
Osmosis
Osmosis is the movement of solvent molecules through a selectively permeable membrane into a region of higher solute concentration, aiming to equalize the solute concentrations on the two sides...
and die or become temporarily inactivated.

It was discovered in the 19th century that salt mixed with nitrites (saltpeter
Potassium nitrate
Potassium nitrate is a chemical compound with the formula KNO3. It is an ionic salt of potassium ions K+ and nitrate ions NO3−.It occurs as a mineral niter and is a natural solid source of nitrogen. Its common names include saltpetre , from medieval Latin sal petræ: "stone salt" or possibly "Salt...
) would color meats red, rather than grey, and consumers at that time then strongly preferred the red-colored meat.

Jewish
Judaism
Judaism ) is the "religion, philosophy, and way of life" of the Jewish people...
and Muslim
Islam
Islam . The most common are and .   : Arabic pronunciation varies regionally. The first vowel ranges from ~~. The second vowel ranges from ~~~...
dietary laws require the removal of blood from freshly slaughtered meat. Salt and brine are used for the purpose in both traditions, but salting is more common in Kosher
Kashrut
Kashrut is the set of Jewish dietary laws. Food in accord with halakha is termed kosher in English, from the Ashkenazi pronunciation of the Hebrew term kashér , meaning "fit" Kashrut (also kashruth or kashrus) is the set of Jewish dietary laws. Food in accord with halakha (Jewish law) is termed...
Shechita
Shechita
Shechita is the ritual slaughter of mammals and birds according to Jewish dietary laws...
(where it is all but required) than in Halal
Halal
Halal is a term designating any object or an action which is permissible to use or engage in, according to Islamic law. The term is used to designate food seen as permissible according to Islamic law...
Dhabiha
Dhabiha
is, in Islamic law, the prescribed method of ritual slaughter of all animals excluding camels, locusts, fish and most sea-life. This method of slaughtering animals consists of a swift, deep incision with a sharp knife on the neck, cutting the jugular veins and carotid arteries of both sides but...
(as in most cases, draining alone will suffice).