Overview
Salt is an ancient agricultural town and administrative centre in west-central Jordan
Jordan
Jordan , officially the Hashemite Kingdom of Jordan , Al-Mamlaka al-Urduniyya al-Hashemiyya) is a kingdom on the East Bank of the River Jordan. The country borders Saudi Arabia to the east and south-east, Iraq to the north-east, Syria to the north and the West Bank and Israel to the west, sharing...
. It is on the old main highway leading from Amman
Amman
Amman is the capital of Jordan. It is the country's political, cultural and commercial centre and one of the oldest continuously inhabited cities in the world. The Greater Amman area has a population of 2,842,629 as of 2010. The population of Amman is expected to jump from 2.8 million to almost...
to Jerusalem. Situated in the Balqa
Balqa
Balqa is one of the governorates of Jordan. It is located northwest of Amman, Jordan's capital.The governorate has the fourth largest population of the 12 governorates of Jordan, and is ranked 10th by Area...
highland, about 790–1100 metres above sea level, the town is built in the crook of three hills, close to the Jordan River valley.

Encyclopedia
Salt is an ancient agricultural town and administrative centre in west-central Jordan
Jordan
Jordan , officially the Hashemite Kingdom of Jordan , Al-Mamlaka al-Urduniyya al-Hashemiyya) is a kingdom on the East Bank of the River Jordan. The country borders Saudi Arabia to the east and south-east, Iraq to the north-east, Syria to the north and the West Bank and Israel to the west, sharing...
. It is on the old main highway leading from Amman
Amman
Amman is the capital of Jordan. It is the country's political, cultural and commercial centre and one of the oldest continuously inhabited cities in the world. The Greater Amman area has a population of 2,842,629 as of 2010. The population of Amman is expected to jump from 2.8 million to almost...
to Jerusalem. Situated in the Balqa
Balqa
Balqa is one of the governorates of Jordan. It is located northwest of Amman, Jordan's capital.The governorate has the fourth largest population of the 12 governorates of Jordan, and is ranked 10th by Area...
highland, about 790–1100 metres above sea level, the town is built in the crook of three hills, close to the Jordan River valley. One of the three hills (Jebal Al Qal'a) is the site of a 13th century ruined fortress. It is the capital of the Balqa Governorate. 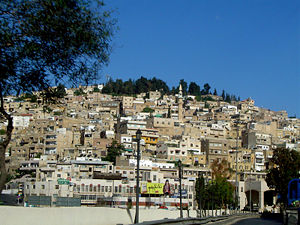 It is not known when the city was first inhabited, but it is believed that it was built by the Macedonian
Ancient Macedonians
The Macedonians originated from inhabitants of the northeastern part of the Greek peninsula, in the alluvial plain around the rivers Haliacmon and lower Axios...
army during the reign of Alexander the Great. The town was known as Saltus in Byzantine
Byzantine Empire
The Byzantine Empire was the Eastern Roman Empire during the periods of Late Antiquity and the Middle Ages, centred on the capital of Constantinople. Known simply as the Roman Empire or Romania to its inhabitants and neighbours, the Empire was the direct continuation of the Ancient Roman State...
times and was the seat of a bishopric
Diocese
A diocese is the district or see under the supervision of a bishop. It is divided into parishes.An archdiocese is more significant than a diocese. An archdiocese is presided over by an archbishop whose see may have or had importance due to size or historical significance...
. At this time the town was considered to be the principal settlement on the East Bank, of the Jordan River. The settlement was destroyed by the Mongols
Mongols
Mongols ) are a Central-East Asian ethnic group that lives mainly in the countries of Mongolia, China, and Russia. In China, ethnic Mongols can be found mainly in the central north region of China such as Inner Mongolia...
and then rebuilt during the reign of the Mamluk
Mamluk
A Mamluk was a soldier of slave origin, who were predominantly Cumans/Kipchaks The "mamluk phenomenon", as David Ayalon dubbed the creation of the specific warrior...
sultan Baybars I (1260–1277) and became a regional capital once more during the time of the Ottoman Empire
Ottoman Empire
The Ottoman EmpireIt was usually referred to as the "Ottoman Empire", the "Turkish Empire", the "Ottoman Caliphate" or more commonly "Turkey" by its contemporaries...
. In the early 1830s, Salt was again attacked, this time being blown up during a raid by the Egyptian viceroy Ibrahim Pasha
Ibrahim Pasha of Egypt
Ibrahim Pasha was the eldest son of Muhammad Ali, the Wāli and unrecognised Khedive of Egypt and Sudan. He served as a general in the Egyptian army that his father established during his reign, taking his first command of Egyptian forces was when he was merely a teenager...
in his campaigns against the Ottomans in Palestine
Palestine
Palestine is a conventional name, among others, used to describe the geographic region between the Mediterranean Sea and the Jordan River, and various adjoining lands....
.:)

Salt's heyday was in the late 19th century when traders arrived from Nablus
Nablus
Nablus is a Palestinian city in the northern West Bank, approximately north of Jerusalem, with a population of 126,132. Located in a strategic position between Mount Ebal and Mount Gerizim, it is the capital of the Nablus Governorate and a Palestinian commercial and cultural center.Founded by the...
to expand their trading network eastwards beyond the River Jordan. As a result of the influx of newcomers this period saw the rapid expansion of Salt from a simple peasant village into a town with many architecturally elegant buildings, many built in the Nablusi style from the attractive honey-coloured local stone. A large number of buildings from this era survive as of 2009.:)

After World War I
World War I
World War I , which was predominantly called the World War or the Great War from its occurrence until 1939, and the First World War or World War I thereafter, was a major war centred in Europe that began on 28 July 1914 and lasted until 11 November 1918...
, the town was the site which Herbert Samuel
Herbert Samuel, 1st Viscount Samuel
Herbert Louis Samuel, 1st Viscount Samuel GCB OM GBE PC was a British politician and diplomat.-Early years:...
, British high commissioner for Palestine, chose to make his announcement that the British favoured a Hejazi Hashimite ruled entity in the East Bank of the Palestine mandate (modern Jordan) (which was granted in 1921).

When Prince Abdullah I rise to power, As-Salt seemed to be the city that would be chosen as the capital of the new kingdom since most of the industry and commerce flowed through here. Salt was the smallest city in TransJordan and has no high schools. Prince Abdullah
2 picked the city as the capital of his emerging emirate but changed his mind and moved his compound and entourage to Amman when he and the notables of Salt had a disagreement. Amman which was a small city of only 20,000 people then city experienced rapid growth.

The Greater Salt Municipality is divided into nine districts: 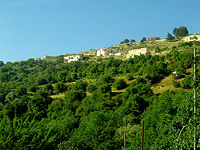 Salt is famed in Jordan for its fertile soil and the quality of its fruit and vegetable harvests, particularly olives, tomato
Tomato
The word "tomato" may refer to the plant or the edible, typically red, fruit which it bears. Originating in South America, the tomato was spread around the world following the Spanish colonization of the Americas, and its many varieties are now widely grown, often in greenhouses in cooler...
es, grapes & peach
Peach
The peach tree is a deciduous tree growing to tall and 6 in. in diameter, belonging to the subfamily Prunoideae of the family Rosaceae. It bears an edible juicy fruit called a peach...
es. Indeed, it is speculated that the town's name provided the root for sultana
Sultana (grape)
The sultana is a type of white, seedless grape assumed to originate from the Turkish, Greek, or Iranian area...
, a certain type of raisin
Raisin
Raisins are dried grapes. They are produced in many regions of the world. Raisins may be eaten raw or used in cooking, baking and brewing...
.
It is thought that the name Salt was derived from the city Saltos of the Roman Empire
Roman Empire
The Roman Empire was the post-Republican period of the ancient Roman civilization, characterised by an autocratic form of government and large territorial holdings in Europe and around the Mediterranean....
.

Wadi Shu'aib (Valley of Jethro) is one of the largest agricultural sites in Salt city, a valley with large agricultural areas. It is named after one of the prophets in Islam (as well as Christianity and Judaism), Shoaib
Shoaib
Shuʿayb, or Shoaib, , was an ancient Midianite prophet, who is mentioned in the Qur'an a total of 11 times. He is believed to have lived after Abraham, and Muslims believe that he was sent as a prophet to two communities, namely the Midianites and the People of the Wood. To both the people, Shoaib...
(Jethro
Jethro
In the Old Testament or the Hebrew Bible, Jethro |Shu-ayb]]) is Moses' father-in-law, a Kenite shepherd and priest of Midian. He is also revered as a prophet in his own right in the Druze religion, and considered an ancestor of the Druze.-In Exodus:...
), who was the father-in-law of Moses
Moses
Moses was, according to the Hebrew Bible and Qur'an, a religious leader, lawgiver and prophet, to whom the authorship of the Torah is traditionally attributed...
and one of the descendants of Ibrahim (Abraham
Abraham
Abraham , whose birth name was Abram, is the eponym of the Abrahamic religions, among which are Judaism, Christianity and Islam...
). Most privately owned farms are located in this valley; the primary crops are grapes, olives and fruit-bearing trees.

An ancient town, Salt was once the most important settlement in the area between the Jordan Valley and the eastern desert. Because of its history as an important trading link between the eastern desert and the west, it was a significant place for the region’s many rulers.
The Romans, Byzantines and Mameluks all contributed to the growth of the town but it was at the end of the 19th and the beginning of the 20th century, during Ottoman rule, when Salt enjoyed its most prosperous period.

It was at that time that the Ottomans established a regional administrative base in Salt and encouraged settlement from other parts of their empire. As the town’s status increased, many merchants arrived and, with their newly acquired wealth, built the fine houses that can still be admired in Salt today.

These splendid yellow sandstone buildings incorporate a variety of local and European styles. Typically, they have domed roofs, interior courtyards and characteristic tall, arched windows. Perhaps the most beautiful is the Abu Jaber mansion, built between 1892 and 1906, which has frescoed ceilings, painted by Italian artists, and is reputed to be the finest example of a 19th century merchant house in the region.

Tightly built on a cluster of three hills, Salt has several other places of interest, including Roman tombs on the outskirts of town and the Citadel and site of the town’s early 13th century Ayyubid fortress which was built by al- Ma’azzam Isa, the nephew of Saladine soon after 1198 AD. There is also a small museum and a handicraft school where you can admire the traditional skills of ceramics, weaving, silk-screen printing and dyeing.
Salt’s Archaeological & Folklore Museum displays artifacts dating back to the Chalcolithic period to the Islamic era as well as other items relating to the history of the area. In the folklore museum there is a good presentation of Bedouin and traditional costumes and everyday folkloric items.
The source of this article is wikipedia, the free encyclopedia.  The text of this article is licensed under the GFDL.