Encyclopedia
The Cathedral of the Holy Wisdom of God or Saint Sophia Cathedral in Harbin
is a former Russian Orthodox church located in the central district of Daoli
Daoli District
Daoli District is one of the oldest districts in the city of Harbin in the Heilongjiang Province in Northeast China. It is located on the Songhua River....
, Harbin City, Heilongjiang Province, China
China
Chinese civilization may refer to:* China for more general discussion of the country.* Chinese culture* Greater China, the transnational community of ethnic Chinese.* History of China* Sinosphere, the area historically affected by Chinese culture...
.

St. Sophia Orthodox Cathedral is one of the most magnificent structures in Harbin. It was built in 1907 after the completion of the Trans-Siberian Railway
Trans-Siberian Railway
The Trans-Siberian Railway is a network of railways connecting Moscow with the Russian Far East and the Sea of Japan. It is the longest railway in the world...
in 1903, which connected Vladivostok
Vladivostok
The city is located in the southern extremity of Muravyov-Amursky Peninsula, which is about 30 km long and approximately 12 km wide.The highest point is Mount Kholodilnik, the height of which is 257 m...
to northeast China. The Russian No.4 Army Division arrived in this region just after Russia's loss to the Japanese in the Russo-Japanese War
Russo-Japanese War
The Russo-Japanese War was "the first great war of the 20th century." It grew out of rival imperial ambitions of the Russian Empire and Japanese Empire over Manchuria and Korea...
(1904–1905). St. Sophia Church was built and completed of timber in March, 1907 as part of a plan to reconsolidate the confidence of the army by building an imposing spiritual symbol.

In 1921, Harbin had a population of 300,000, including 100,000 Russians. The church was expanded and renovated from September 23, 1923, when a ceremony was held to celebrate the laying of the cornerstone, to its completion on November 25, 1932, after nine years. The present day St. Sophia Church was hailed as a monumental work of art and the largest Orthodox church in the far east
Far East
The Far East is an English term mostly describing East Asia and Southeast Asia, with South Asia sometimes also included for economic and cultural reasons.The term came into use in European geopolitical discourse in the 19th century,...
.

According to Harbin municipal religious and Daoli district archives, Fr. Fotiy Huo Desheng was the ninth rector of St. Sophia Church of Harbin. 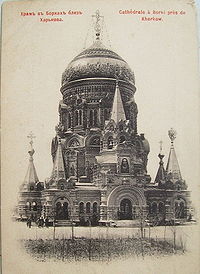 The church is located on the corner of Toulin Street (Toulin jie) and Zhaolin Street (Zhaolin jie). It stands at 53.3 meters (175 ft) tall, occupies an area of 721 square meters (0.18 acres), and is the perfect example of Neo-Byzantine architecture
Neo-Byzantine architecture
The Byzantine Revival was an architectural revival movement, most frequently seen in religious, institutional and public buildings. It emerged in 1840s in Western Europe and peaked in the last quarter of 19th century in the Russian Empire; an isolated Neo-Byzantine school was active in Yugoslavia...
. The main structure is laid out like a cross with the main hall topped with a huge green tipped dome. Under the bright sun, the church and the square area it lies on looks quite like the Red Square
Red Square
Red Square is a city square in Moscow, Russia. The square separates the Kremlin, the former royal citadel and currently the official residence of the President of Russia, from a historic merchant quarter known as Kitai-gorod...
in Moscow.


Although the cathedral's sturdy structure withstood its intended destruction during the Cultural Revolution, its empty hull became a warehouse for a nearby state-run department store, its windows were bricked up and saplings grew from the roof. Prefabricated concrete high-rises boxed the church in on all four sides, coming within yards of its walls, making the cathedral inaccessible and invisible from the street. For decades it remained the invisible center of the city, surrounded by decorative material stalls, an auto body shop, a pen factory, and apartments for city government employees, until the Beijing government designated the cathedral a national cultural heritage site in 1996 as part of a nationwide campaign to protect historical sites.

Following its designation in 1996 as a national cultural heritage site (First class Preserved Building), a newspaper article about the "hidden" cathedral prompted donations from locals to restore the church. Local corporations, individual businesses as well as workers from nearby department stores donated money to restore the cathedral and renovate the square. A total of 12,000,000 yuan (approximately $1.5 million US) was eventually gathered and the cathedral regained its visibility in 1997, as the surrounding buildings were torn down.

A new "Harbin Architecture Square" conspicuously highlighted the cathedral with a huge new fountain at its entrance. The European-looking space was assigned a new meaning as the embodiment of culture and art and was re-presented to the public as the proud heritage of the city.

As of 1997 the cathedral was turned into the Municipal Architecture and Art Museum (Harbin Architectural Art Gallery), showcasing the multi-cultural architectural developments of Harbin throughout the ages. At the official ceremony on September 2, 1997 to celebrate the restoration of St. Sophia Cathedral, Mayor Wang Guangdao underlined the cultural and economic benefits expected from the project:

"The restoration of St. Sophia Cathedral inspired the people of Harbin, raised the level of our culture, let the whole of China and foreign friends know China, and opened a way for faster economic development."

The restoration was the culmination of the Harbin municipal government's attempt to turn the city's colonial era structures into tourist attractions by restoring and granting them landmark status. The restored structures are said to signify civilization (wenming
China
Chinese civilization may refer to:* China for more general discussion of the country.* Chinese culture* Greater China, the transnational community of ethnic Chinese.* History of China* Sinosphere, the area historically affected by Chinese culture...
) and culture (wenhua
Culture of China
Chinese culture is one of the world's oldest and most complex. The area in which the culture is dominant covers a large geographical region in eastern Asia with customs and traditions varying greatly between towns, cities and provinces...
).