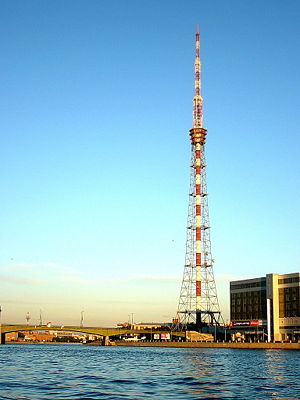 The Saint Petersburg TV Tower is a 310 meter high lattice steel tower
Lattice tower
A lattice tower or truss tower is a freestanding framework tower. They can be used as electricity pylons especially for voltages above 100 kilovolts, as a radio tower or as an observation tower....
in Saint Petersburg
Saint Petersburg
Saint Petersburg is a city and a federal subject of Russia located on the Neva River at the head of the Gulf of Finland on the Baltic Sea...
, Russia
Russia
Russia or , officially known as both Russia and the Russian Federation , is a country in northern Eurasia. It is a federal semi-presidential republic, comprising 83 federal subjects...
. It was built in 1962 and was the first dedicated TV tower in the Soviet Union
Soviet Union
The Soviet Union , officially the Union of Soviet Socialist Republics , was a constitutionally socialist state that existed in Eurasia between 1922 and 1991....
. It is used for FM- and TV-broadcasting
Broadcasting
Broadcasting is the distribution of audio and video content to a dispersed audience via any audio visual medium. Receiving parties may include the general public or a relatively large subset of thereof...
.