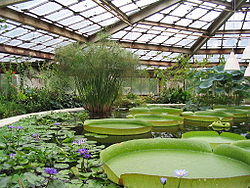 The Saint Petersburg Botanical Garden, also known as the Botanic Gardens of the Komarov Botanical Institute or the Komarov Botanical Garden, is the oldest botanical garden
Botanical garden
A botanical garden The terms botanic and botanical, and garden or gardens are used more-or-less interchangeably, although the word botanic is generally reserved for the earlier, more traditional gardens. is a well-tended area displaying a wide range of plants labelled with their botanical names...
in Russia
Russia
Russia or , officially known as both Russia and the Russian Federation , is a country in northern Eurasia. It is a federal semi-presidential republic, comprising 83 federal subjects...
, consisting of outdoor and rich indoor collections, which is situated on Aptekarsky Island
Aptekarsky Island
Aptekarsky Island is a small island situated in the northern part of the Neva delta. It is separated from Petrogradsky Island by the Karpovka River, from Kamenny Island and Krestovsky Island by the Malaya Nevka and from the Vyborgskaya region of St-Petersburg by the Bolshaya Nevka. It has an area...
in Saint Petersburg
Saint Petersburg
Saint Petersburg is a city and a federal subject of Russia located on the Neva River at the head of the Gulf of Finland on the Baltic Sea...
and belongs to the Komarov Botanical Institute
Komarov Botanical Institute
The Komarov Botanical Institute of the Russian Academy of Sciences is a leading botanical institution in Russia, It is located on Aptekarsky Island in St. Petersburg, and is named after the Russian botanist Vladimir Leontyevich Komarov...
of the Russian Academy of Sciences
Russian Academy of Sciences
The Russian Academy of Sciences consists of the national academy of Russia and a network of scientific research institutes from across the Russian Federation as well as auxiliary scientific and social units like libraries, publishers and hospitals....
. It is 18.9 ha
Hectare
The hectare is a metric unit of area defined as 10,000 square metres , and primarily used in the measurement of land. In 1795, when the metric system was introduced, the are was defined as being 100 square metres and the hectare was thus 100 ares or 1/100 km2...
in area, and is bordered by Aptekarsky Prospekt (main entrance), Prof. Popov Street (second entrance), as well as the embankments of the river Karpovka and the river Bolshaya Nevka.

The garden was founded by Peter I
Peter I of Russia
Peter the Great, Peter I or Pyotr Alexeyevich Romanov Dates indicated by the letters "O.S." are Old Style. All other dates in this article are New Style. ruled the Tsardom of Russia and later the Russian Empire from until his death, jointly ruling before 1696 with his half-brother, Ivan V...
in 1714 as a herb garden in order to grow medicinal plants and reestablished as a botanical institution under the name Imperial Botanical Garden in 1823. Ivan Lepyokhin
Ivan Lepyokhin
Ivan Ivanovich Lepyokhin was a Russian naturalist, zoologist, botanist and explorer....
was in charge of the botanical garden from 1774 until 1802. In 1930 it became subordinate to the Academy of Sciences of the Soviet Union and in 1931 was merged with the Botanical Museum into the Botanical Institute
Komarov Botanical Institute
The Komarov Botanical Institute of the Russian Academy of Sciences is a leading botanical institution in Russia, It is located on Aptekarsky Island in St. Petersburg, and is named after the Russian botanist Vladimir Leontyevich Komarov...
.

The garden has 25 greenhouses constructed in 1823-1824 (No. 1 – 28, the greenhouses No. 5 and No. 25 don't exist, the greenhouses No. 10-11 are shared), some of them are open to the public (guided visits only), including the huge collections of azalea
Azalea
Azaleas are flowering shrubs comprising two of the eight subgenera of the genus Rhododendron, Pentanthera and Tsutsuji . Azaleas bloom in spring, their flowers often lasting several weeks...
s and other Ericaceae
Ericaceae
The Ericaceae, commonly known as the heath or heather family, is a group of mostly calcifuge flowering plants. The family is large, with roughly 4000 species spread across 126 genera, making it the 14th most speciose family of flowering plants...
(No. 6), fern
Fern
A fern is any one of a group of about 12,000 species of plants belonging to the botanical group known as Pteridophyta. Unlike mosses, they have xylem and phloem . They have stems, leaves, and roots like other vascular plants...
s (No. 15), cacti
Cacti
-See also:* RRDtool The underlying software upon which Cacti is built* MRTG The original Multi Router Traffic Grapher from which RRDtool was "extracted".* Munin -External links:******...
and other succulents (No. 16), various tropical plants (No. 18), the 23.5 m high Big Palm Greenhouse with an important collection of orchids (No. 26) and greenhouse with a pond featuring Victoria amazonica
Victoria amazonica
Victoria amazonica is a species of flowering plant, the largest of the Nymphaeaceae family of water lilies.-Description:The species has very large leaves, up to 3 m in diameter, that float on the water's surface on a submerged stalk, 7–8 m in length. The species was once called Victoria...
(no. 28). The night blossom of cactus Selenicereus grandiflorus
Selenicereus grandiflorus
Selenicereus grandiflorus is a cactus species originating from the Antilles, Mexico and Central America. The species is commonly referred to as Nightblooming Cereus, Queen of the Night , Large-flowered Cactus, Sweet-Scented Cactus or Vanilla Cactus. The true species is extremely rare in cultivation...
, cultivated there since 1857, is a celebrated event announced in mass media and open to the public in the 16th greenhouse in June-July. The indoor collections suffered significant losses during the Siege of Leningrad
Siege of Leningrad
The Siege of Leningrad, also known as the Leningrad Blockade was a prolonged military operation resulting from the failure of the German Army Group North to capture Leningrad, now known as Saint Petersburg, in the Eastern Front theatre of World War II. It started on 8 September 1941, when the last...
in 1941-1944. Out of 6367 species only 861 survived.

The chain of greenhouses encircles the Southern Yard and the Northern Yard, the latter featuring an extensive outdoor collection of Iridaceae
Iridaceae
The Iris family or Iridaceae is a family of perennial, herbaceous and bulbous plants included in the monocot order Asparagales, taking its name from the genus Iris. Almost worldwide in distribution and one of the most important families in horticulture, it includes more than 2000 species...
and bulb
Bulb
A bulb is a short stem with fleshy leaves or leaf bases. The leaves often function as food storage organs during dormancy.A bulb's leaf bases, known as scales, generally do not support leaves, but contain food reserves to enable the plant to survive adverse conditions. At the center of the bulb is...
plants. The building of the botanical museum faces the Northern Yard in place of the non-existent greenhouse No. 5.

The outer park includes a small rock garden (constructed in the end of the 19th century) located in front of the Big Palm Greenhouse, and a 0.16 km² arboretum, organized partly as an English garden
English garden
The English garden, also called English landscape park , is a style of Landscape garden which emerged in England in the early 18th century, and spread across Europe, replacing the more formal, symmetrical Garden à la française of the 17th century as the principal gardening style of Europe. The...
and partly as a formal garden. The park, unlike the greenhouses, is closed for visitors from October 1 to May 8. It is elevated only 1.5-3 m above sea-level and has thus regularly suffered from catastrophic floods
Floods in Saint Petersburg
Floods in Saint Petersburg refer to a rise of water on the territory of St. Petersburg, a major city in Russia and its former capital. They are usually caused by the overflow of the delta of Neva River and surging water in the eastern part of Neva Bay but sometimes caused by melting snow...
characteristic of Saint Petersburg. The herbarium edifice built in 1913 stands in front of the main entrance.