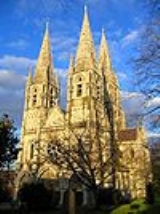 Encyclopedia
Saint Fin Barre's Cathedral, is a cathedral
Cathedral
A cathedral is a Christian church that contains the seat of a bishop...
of the Church of Ireland
Church of Ireland
The Church of Ireland is an autonomous province of the Anglican Communion. The church operates in all parts of Ireland and is the second largest religious body on the island after the Roman Catholic Church...
in Cork
Cork (city)
Cork is the second largest city in the Republic of Ireland and the island of Ireland's third most populous city. It is the principal city and administrative centre of County Cork and the largest city in the province of Munster. Cork has a population of 119,418, while the addition of the suburban...
city, Ireland
Republic of Ireland
Ireland , described as the Republic of Ireland , is a sovereign state in Europe occupying approximately five-sixths of the island of the same name. Its capital is Dublin. Ireland, which had a population of 4.58 million in 2011, is a constitutional republic governed as a parliamentary democracy,...
. It is in the ecclesiastical province
Ecclesiastical Province
An ecclesiastical province is a large jurisdiction of religious government, so named by analogy with a secular province, existing in certain hierarchical Christian churches, especially in the Catholic Church and Orthodox Churches and in the Anglican Communion...
of Dublin.

Previously the cathedral of the Diocese of Cork, it is now one of three cathedrals in the United Dioceses of Cork, Cloyne and Ross. 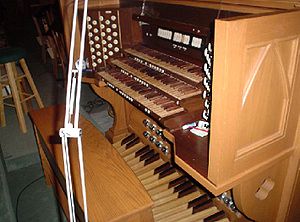 The Organ
Organ (music)
The organ , is a keyboard instrument of one or more divisions, each played with its own keyboard operated either with the hands or with the feet. The organ is a relatively old musical instrument in the Western musical tradition, dating from the time of Ctesibius of Alexandria who is credited with...
was built in 1870 by William Hill of London, with 3 manuals and 40 stop
Organ stop
An organ stop is a component of a pipe organ that admits pressurized air to a set of organ pipes. Its name comes from the fact that stops can be used selectively by the organist; some can be "on" , while others can be "off" .The term can also refer...
s. The action on the Great was some form of pneumatic action (possibly Barker lever
Barker lever
The Barker lever is a pneumatic system which multiplies the force of a finger on the key of a tracker pipe organ. It employs the wind pressure of the organ to inflate small bellows called "pneumatics" to overcome the resistance of the pallets in the organ's wind-chest . This lever allowed for the...
) on the Great, and tracker for the other two manuals.

The instrument was then overhauled in 1889 by the Cork Organ-building firm, T.W. Megahy, who added three new stops, though it is not entirely clear which these were. It was at this time that the Organ was moved from the West Gallery
Balcony
Balcony , a platform projecting from the wall of a building, supported by columns or console brackets, and enclosed with a balustrade.-Types:The traditional Maltese balcony is a wooden closed balcony projecting from a...
down to a Pit in the North Transept
Transept
For the periodical go to The Transept.A transept is a transverse section, of any building, which lies across the main body of the building. In Christian churches, a transept is an area set crosswise to the nave in a cruciform building in Romanesque and Gothic Christian church architecture...
, where it still sits today.

The next major overhaul of the instrument was in 1906 by Hele & Co. of Plymouth, who added a fourth Manual (the Solo). By this stage, the action of the organ was entirely pneumatic.