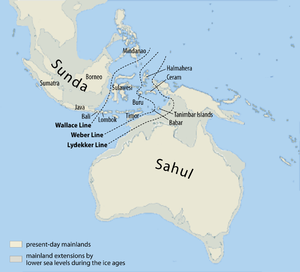 The Sahul Shelf is part of the continental shelf
Continental shelf
The continental shelf is the extended perimeter of each continent and associated coastal plain. Much of the shelf was exposed during glacial periods, but is now submerged under relatively shallow seas and gulfs, and was similarly submerged during other interglacial periods. The continental margin,...
of Sahul
Australia (continent)
Australia is the world's smallest continent, comprising the mainland of Australia and proximate islands including Tasmania, New Guinea, the Aru Islands and Raja Ampat Islands...
(the Australia-New Guinea continent) and lies off the coast of Australia
Australia
Australia , officially the Commonwealth of Australia, is a country in the Southern Hemisphere comprising the mainland of the Australian continent, the island of Tasmania, and numerous smaller islands in the Indian and Pacific Oceans. It is the world's sixth-largest country by total area...
. The Sahul Shelf proper stretches northwest from Australia much of the way under the Timor Sea
Timor Sea
The Timor Sea is a relatively shallow sea bounded to the north by the island of Timor, to the east by the Arafura Sea, to the south by Australia and to the west by the Indian Ocean....
towards Timor
Timor
Timor is an island at the southern end of Maritime Southeast Asia, north of the Timor Sea. It is divided between the independent state of East Timor, and West Timor, belonging to the Indonesian province of East Nusa Tenggara. The island's surface is 30,777 square kilometres...
, ending where the seabed begins descending into the Timor Trough
Timor Trough
The Timor Trough is an oceanic trough that is a continuation of the Sunda Trench that marks the boundary between Indo-Australian Plate's continental shelf and the Timor Plate to the north...
. Another part of the Sahul Shelf is known also as the Arafura Shelf and runs all the way from the northern coast of Australia under the Arafura Sea
Arafura Sea
The Arafura Sea lies west of the Pacific Ocean overlying the continental shelf between Australia and New Guinea.-Geography:The Arafura Sea is bordered by Torres Strait and through that the Coral Sea to the east, the Gulf of Carpentaria to the south, the Timor Sea to the west and the Banda and Ceram...
to New Guinea
New Guinea
New Guinea is the world's second largest island, after Greenland, covering a land area of 786,000 km2. Located in the southwest Pacific Ocean, it lies geographically to the east of the Malay Archipelago, with which it is sometimes included as part of a greater Indo-Australian Archipelago...
. The Aru Islands
Aru Islands
The Aru Islands are a group of about ninety-five low-lying islands in the Maluku province of eastern Indonesia. They also form a regency of Indonesia.-Geography:...
rise from the Arafura Shelf. The Sahul Shelf is sometimes taken to also include the Rowley Shelf which runs out under the Indian Ocean
Indian Ocean
The Indian Ocean is the third largest of the world's oceanic divisions, covering approximately 20% of the water on the Earth's surface. It is bounded on the north by the Indian Subcontinent and Arabian Peninsula ; on the west by eastern Africa; on the east by Indochina, the Sunda Islands, and...
from the northwest coast of Australia as far south as North West Cape
North West Cape
North West Cape is a large peninsula of land in the north west coast of Western Australia. Cape Range runs down the spine of the peninsula and Ningaloo Reef runs along the western edge...
.

When sea level
Sea level
Mean sea level is a measure of the average height of the ocean's surface ; used as a standard in reckoning land elevation...
s fell during the Pleistocene
Pleistocene
The Pleistocene is the epoch from 2,588,000 to 11,700 years BP that spans the world's recent period of repeated glaciations. The name pleistocene is derived from the Greek and ....
ice age
Ice age
An ice age or, more precisely, glacial age, is a generic geological period of long-term reduction in the temperature of the Earth's surface and atmosphere, resulting in the presence or expansion of continental ice sheets, polar ice sheets and alpine glaciers...
, including the last glacial maximum
Last Glacial Maximum
The Last Glacial Maximum refers to a period in the Earth's climate history when ice sheets were at their maximum extension, between 26,500 and 19,000–20,000 years ago, marking the peak of the last glacial period. During this time, vast ice sheets covered much of North America, northern Europe and...
about 18,000 years ago, the Sahul Shelf was exposed as dry land. Evidence of the shoreline of this time has been identified in locations which now lie 100 to 140 metres below sea level. A useful interactive timeline of sea level changes has been developed by Monash University. The Arafura Shelf formed a land bridge
Land bridge
A land bridge, in biogeography, is an isthmus or wider land connection between otherwise separate areas, over which animals and plants are able to cross and colonise new lands...
between Australia, New Guinea and the Aru Islands and these lands share many marsupial mammals
Marsupial
Marsupials are an infraclass of mammals, characterized by giving birth to relatively undeveloped young. Close to 70% of the 334 extant species occur in Australia, New Guinea, and nearby islands, with the remaining 100 found in the Americas, primarily in South America, but with thirteen in Central...
, land birds and freshwater fish as a result. Lydekker's Line, a biogeographical
Biogeography
Biogeography is the study of the distribution of species , organisms, and ecosystems in space and through geological time. Organisms and biological communities vary in a highly regular fashion along geographic gradients of latitude, elevation, isolation and habitat area...
line, runs along the edge of Sahul Shelf where it drops off into the deep waters of the Wallacea
Wallacea
Wallacea is a biogeographical designation for a group of Indonesian islands separated by deep water straits from the Asian and Australian continental shelves. Wallacea includes Sulawesi, the largest island in the group, as well as Lombok, Sumbawa, Flores, Sumba, Timor, Halmahera, Buru, Seram, and...
biogeographical area. Wallacea sits in a gap between the Sahul Shelf and the Sunda Shelf
Sunda Shelf
Geologically, the Sunda Shelf is a south east extension of the continental shelf of Southeast Asia. Major landmasses on the shelf include the Malay Peninsula, Sumatra, Borneo, Java, Madura, Bali and their surrounding smaller islands. It covers an area of approximately 1.85 million km2...
, part of the continental shelf of Southeast Asia
Southeast Asia
Southeast Asia, South-East Asia, South East Asia or Southeastern Asia is a subregion of Asia, consisting of the countries that are geographically south of China, east of India, west of New Guinea and north of Australia. The region lies on the intersection of geological plates, with heavy seismic...
.

The name "Sahull" or "Sahoel" appeared on 17th century Dutch maps applied to a submerged sandbank between Australia and Timor. On his 1803 map, Matthew Flinders
Matthew Flinders
Captain Matthew Flinders RN was one of the most successful navigators and cartographers of his age. In a career that spanned just over twenty years, he sailed with Captain William Bligh, circumnavigated Australia and encouraged the use of that name for the continent, which had previously been...
noted the "Great Sahul Shoal" where Malay
Malay people
Malays are an ethnic group of Austronesian people predominantly inhabiting the Malay Peninsula, including the southernmost parts of Thailand, the east coast of Sumatra, the coast of Borneo, and the smaller islands which lie between these locations...
s came from Makassar
Makassar
Makassar, is the provincial capital of South Sulawesi, Indonesia, and the largest city on Sulawesi Island. From 1971 to 1999, the city was named Ujung Pandang, after a precolonial fort in the city, and the two names are often used interchangeably...
to fish for trepang (sea cucumber).

The existence of the much larger Sahul Shelf was suggested in 1845 by G.W. Earl who called it the "Great Australian Bank" and noted that macropods ("kangaroos") were found on Australia, New Guinea and the Aru Islands. Earl also suggested the existence of the Sunda Shelf which he called the "Great Asiatic Bank". The Sahul and Sunda shelves were given their present names by G.A.F. Molengraaff
Gustaaf Adolf Frederik Molengraaff
Gustaaf Adolf Frederik Molengraaff was a Dutch geologist, biologist and explorer. He became an authority on the geology of South Africa and the Dutch East Indies....
and Max Wilhelm Carl Weber in 1919.
The source of this article is wikipedia, the free encyclopedia.  The text of this article is licensed under the GFDL.