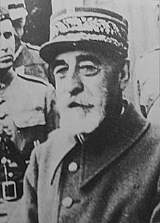 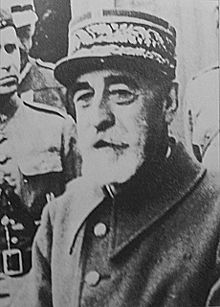 The Saar Offensive was a French
France
The French Republic , The French Republic , The French Republic , (commonly known as France , is a unitary semi-presidential republic in Western Europe with several overseas territories and islands located on other continents and in the Indian, Pacific, and Atlantic oceans. Metropolitan France...
operation into Saarland
Saarland
Saarland is one of the sixteen states of Germany. The capital is Saarbrücken. It has an area of 2570 km² and 1,045,000 inhabitants. In both area and population, it is the smallest state in Germany other than the city-states...
on the German
Nazi Germany
Nazi Germany , also known as the Third Reich , but officially called German Reich from 1933 to 1943 and Greater German Reich from 26 June 1943 onward, is the name commonly used to refer to the state of Germany from 1933 to 1945, when it was a totalitarian dictatorship ruled by...
1st Army defence sector in the early stages of World War II
World War II
World War II, or the Second World War , was a global conflict lasting from 1939 to 1945, involving most of the world's nations—including all of the great powers—eventually forming two opposing military alliances: the Allies and the Axis...
. The purpose of the attack was to assist Poland
Poland
Poland , officially the Republic of Poland , is a country in Central Europe bordered by Germany to the west; the Czech Republic and Slovakia to the south; Ukraine, Belarus and Lithuania to the east; and the Baltic Sea and Kaliningrad Oblast, a Russian exclave, to the north...
, which was then under attack. However, the assault was stopped and the French forces withdrew.

According to the Franco-Polish military convention, the French Army was to start preparations for the major offensive three days after mobilisation started. The French forces were to effectively gain control over the area between the French border and the German lines
Siegfried Line
The original Siegfried line was a line of defensive forts and tank defences built by Germany as a section of the Hindenburg Line 1916–1917 in northern France during World War I...
and were to probe the German defenses. On the 15th day of the mobilization (that is on 16 September), the French Army was to start a full-scale assault on Germany. The preemptive mobilization was started in France on August 26 and on September 1 full mobilization was declared.

French mobilization suffered from an inherently out of date system. The French military′s ordnance lacked the tanks and planes of the mechanized German military which greatly affected their ability to swiftly deploy their forces on the field. French command still believed in tactics of the previous war which relied heavily on stationary artillery which took time to transport and deploy (many pieces also had to be retrieved from storage before any advance could be made).

A French offensive in the Rhine valley began on 7 September, four days after France declared war on Germany. Then, the Wehrmacht
Wehrmacht
The Wehrmacht – from , to defend and , the might/power) were the unified armed forces of Nazi Germany from 1935 to 1945. It consisted of the Heer , the Kriegsmarine and the Luftwaffe .-Origin and use of the term:...
was occupied in the attack on Poland, and the French soldiers enjoyed a decisive numerical advantage along the border with Germany. However, the French did not take any action that was able to assist the Poles. Eleven French divisions advanced along a 32 km (19.9 mi) line near Saarbrücken
Saarbrücken
Saarbrücken is the capital of the state of Saarland in Germany. The city is situated at the heart of a metropolitan area that borders on the west on Dillingen and to the north-east on Neunkirchen, where most of the people of the Saarland live....
against weak German opposition. The French army had advanced to a depth of 8 km (5 mi) and captured about 20 villages evacuated by the German army, without any resistance. However, the half-hearted offensive was halted after France seized the Warndt Forest, 3 sq mi (7.8 km²) of heavily-mined
Land mine
A land mine is usually a weight-triggered explosive device which is intended to damage a target—either human or inanimate—by means of a blast and/or fragment impact....
German territory.

The attack did not result in any diversion of German troops. The all-out assault was to be carried out by roughly 40 divisions, including one armored division, three mechanized divisions, 78 artillery regiments and 40 tank battalions. On 12 September, the Anglo French Supreme War Council
Anglo French Supreme War Council
The Anglo-French Supreme War Council, sometimes known as the Supreme War Council , was established to oversee joint military strategy at the start of the Second World War. Most of its deliberations took place during the period of the Phoney War, with its first meeting at Abbeville on 12 September...
gathered for the first time at Abbeville
Abbeville
Abbeville is a commune in the Somme department in Picardie in northern France.-Location:Abbeville is located on the Somme River, from its modern mouth in the English Channel, and northwest of Amiens...
in France. It was decided that all offensive actions were to be halted immediately. General Maurice Gamelin
Maurice Gamelin
Maurice Gustave Gamelin was a French general. Gamelin is best remembered for his unsuccessful command of the French military in 1940 during the Battle of France and his steadfast defense of republican values....
ordered his troops to stop "not closer than 1 kilometre" from the German positions along the Siegfried Line
Siegfried Line
The original Siegfried line was a line of defensive forts and tank defences built by Germany as a section of the Hindenburg Line 1916–1917 in northern France during World War I...
. Poland was not notified of this decision. Instead, Gamelin informed Marshal Edward Rydz-Śmigły that 1/2 of his divisions were in contact with the enemy, and that French advances had forced the Wehrmacht to withdraw at least six divisions from Poland. The following day, the commander of the French Military Mission to Poland
French Military Mission to Poland
The French Military Mission to Poland was an effort by France to aid the nascent Second Polish Republic after it achieved its independence in November, 1918, at the end of the First World War. The aim was to provide aid during the Polish-Soviet War , and to create a strong Polish military to serve...
—General Louis Faury
Louis Faury
Louis Faury was a French military commander. In the 1920s he acted as a chief of General Staff Academy in Poland. Well known to his Polish students under nickname Papa Faury. He was made General Officer commanding the 3rd Division in 1936...
—informed the Polish chief of staff—General Wacław Stachiewicz—that the planned major offensive on the western front had to be postponed from 17 September to 20 September. At the same time, French divisions were ordered to retreat to their barracks
Barracks
Barracks are specialised buildings for permanent military accommodation; the word may apply to separate housing blocks or to complete complexes. Their main object is to separate soldiers from the civilian population and reinforce discipline, training and esprit de corps. They were sometimes called...
along the Maginot Line
Maginot Line
The Maginot Line , named after the French Minister of War André Maginot, was a line of concrete fortifications, tank obstacles, artillery casemates, machine gun posts, and other defences, which France constructed along its borders with Germany and Italy, in light of its experience in World War I,...
. The Phoney War had begun.
The source of this article is wikipedia, the free encyclopedia.  The text of this article is licensed under the GFDL.