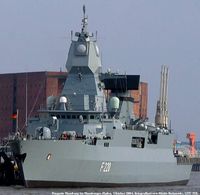 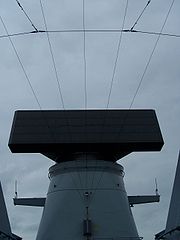 The phased array
Phased array
In wave theory, a phased array is an array of antennas in which the relative phases of the respective signals feeding the antennas are varied in such a way that the effective radiation pattern of the array is reinforced in a desired direction and suppressed in undesired directions.An antenna array...
antenna has 24 elements; all are used for reception, while only 16 are used for creating virtual receiver beams through digital beamforming
Beamforming
Beamforming is a signal processing technique used in sensor arrays for directional signal transmission or reception. This is achieved by combining elements in the array in a way where signals at particular angles experience constructive interference and while others experience destructive...
. The beams' vertical elevation, and compensation for ship movement, is done electronically. Horizontal training is done by mechanically rotating the entire array.

As designed, SMART-L has a maximum range of 400 km against patrol aircraft, and 65 km against stealthy missiles. A software upgrade, Extended Long Range (ELR) Mode, extends the maximum range to 480 km. In 2006 HNLMS Tromp
HNLMS Tromp (F803)
HNLMS Tromp is the second De Zeven Provinciën class frigate of the Royal Netherlands Navy. It was laid down in 1999, launched in 2001, and commissioned in 2003...
used the ELR Mode to track a ARAV-B missile from 150 km during a US Navy ballistic missile defence exercise.