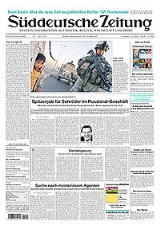 Encyclopedia
The Süddeutsche Zeitung ˈzyːtˌdɔʏtʃə ˈtsaɪtʊŋ, published in Munich
Munich
Munich The city's motto is "" . Before 2006, it was "Weltstadt mit Herz" . Its native name, , is derived from the Old High German Munichen, meaning "by the monks' place". The city's name derives from the monks of the Benedictine order who founded the city; hence the monk depicted on the city's coat...
, is the largest German
Germany
Germany , officially the Federal Republic of Germany , is a federal parliamentary republic in Europe. The country consists of 16 states while the capital and largest city is Berlin. Germany covers an area of 357,021 km2 and has a largely temperate seasonal climate...
national subscription daily newspaper
Newspaper
A newspaper is a scheduled publication containing news of current events, informative articles, diverse features and advertising. It usually is printed on relatively inexpensive, low-grade paper such as newsprint. By 2007, there were 6580 daily newspapers in the world selling 395 million copies a...
.

The title literally translates as "South German Newspaper". It is read throughout Germany by 1.1 million readers daily and boasts a relatively high circulation abroad. The editorial stance of the newspaper is liberal
Liberalism
Liberalism is the belief in the importance of liberty and equal rights. Liberals espouse a wide array of views depending on their understanding of these principles, but generally, liberals support ideas such as constitutionalism, liberal democracy, free and fair elections, human rights,...
and generally centrist
Centrism
In politics, centrism is the ideal or the practice of promoting policies that lie different from the standard political left and political right. Most commonly, this is visualized as part of the one-dimensional political spectrum of left-right politics, with centrism landing in the middle between...
, leading some to joke that the SZ was the only opposition in the state of Bavaria
Bavaria
Bavaria, formally the Free State of Bavaria is a state of Germany, located in the southeast of Germany. With an area of , it is the largest state by area, forming almost 20% of the total land area of Germany...
, which has been governed by the conservative Christian Social Union of Bavaria
Christian Social Union of Bavaria
The Christian Social Union in Bavaria is a Christian democratic and conservative political party in Germany. It operates only in the state of Bavaria, while its sister party, the Christian Democratic Union , operates in the other 15 states of Germany...
almost continuously since 1949.

Some of Germany's best known journalists either work for the SZ or spent considerable parts of their careers working for the paper. Heribert Prantl
Heribert Prantl
Heribert Prantl is a German journalist and jurist. He is currently the head of the domestic policy department of the Süddeutsche Zeitung.-Early life:...
, head of the national desk, is a lawyer by education, a former public prosecutor, and the most cited author of editorial commentaries in German press. Hans Leyendecker
Hans Leyendecker
Hans Leyendecker is a German journalist. He writes for the Süddeutsche Zeitung and is one of Germany's best known investigative journalists....
is one of Germany's best known investigative journalists
Investigative journalism
Investigative journalism is a form of journalism in which reporters deeply investigate a single topic of interest, often involving crime, political corruption, or corporate wrongdoing. An investigative journalist may spend months or years researching and preparing a report. Investigative journalism...
. Leyendecker formerly worked for the magazine Der Spiegel
Der Spiegel
Der Spiegel is a German weekly news magazine published in Hamburg. It is one of Europe's largest publications of its kind, with a weekly circulation of more than one million.-Overview:...
, unveiling various political and economic scandals, such as the widespread illegal party financing during the 1980s, and that of the CDU
Christian Democratic Union (Germany)
The Christian Democratic Union of Germany is a Christian democratic and conservative political party in Germany. It is regarded as on the centre-right of the German political spectrum...
in 1999. He also unveiled the smuggling of Russian plutonium
Plutonium
Plutonium is a transuranic radioactive chemical element with the chemical symbol Pu and atomic number 94. It is an actinide metal of silvery-gray appearance that tarnishes when exposed to air, forming a dull coating when oxidized. The element normally exhibits six allotropes and four oxidation...
into Germany, with the help of the foreign intelligence service Bundesnachrichtendienst
Bundesnachrichtendienst
The Bundesnachrichtendienst [ˌbʊndəsˈnaːχʁɪçtnˌdiːnst] is the foreign intelligence agency of Germany, directly subordinated to the Chancellor's Office. Its headquarters are in Pullach near Munich, and Berlin . The BND has 300 locations in Germany and foreign countries...
in 1994, bribery at arms deals, German Visa Affair 2005
German Visa Affair 2005
The visa affair is the name given by German press to the controversy which arose in early 2005 over a change in the procedure for issuing visas to foreign nationals seeking to enter Germany from non-EU, Eastern European states...
and corruption of the staff council at Volkswagen
Volkswagen
Volkswagen is a German automobile manufacturer and is the original and biggest-selling marque of the Volkswagen Group, which now also owns the Audi, Bentley, Bugatti, Lamborghini, SEAT, and Škoda marques and the truck manufacturer Scania.Volkswagen means "people's car" in German, where it is...
. Another well-known journalist working for the SZ is Rudolph Chimelli
Rudolph Chimelli
Rudolph Maximilian Chimelli is a German journalist and writer.Chimelli studied first law and economy. In 1968 he went to Beirut, from where he contributed to several newspapers with articles about the Arab world...
, a political reporter who has been working for the paper since January 1, 1957.

Martin Süßkind also formerly worked with the SZ and eventually became the editor of the Berliner Zeitung
Berliner Zeitung
The Berliner Zeitung, founded in 1945, is a German center-left daily newspaper based in Berlin, published by Berliner Verlag. It is the only East German paper to achieve national prominence since unification. In 2003, the Berliner was Berlin's largest subscription newspaper—the weekend...
. Giovanni di Lorenzo
Giovanni di Lorenzo
Giovanni di Lorenzo is a German-Italian journalist. Editor-in-chief of German nationwide weekly newspaper DIE ZEIT and former editor-in-chief of Berlin's liberal daily newspaper Der Tagesspiegel...
, who was responsible for the SZ's full page documentary
Documentary film
Documentary films constitute a broad category of nonfictional motion pictures intended to document some aspect of reality, primarily for the purposes of instruction or maintaining a historical record...
Seite 3 (Page 3) from 1994 to 1998, and who was later editor-in-chief of the Tagesspiegel, also worked for the paper. He is now editor-in-chief of the weekly German newspaper Die Zeit
Die Zeit
Die Zeit is a German nationwide weekly newspaper that is highly respected for its quality journalism.With a circulation of 488,036 and an estimated readership of slightly above 2 million, it is the most widely read German weekly newspaper...
.

The SZ is well known for its daily frontpage column Streiflicht (streak of light) of 72 lines, which is published anonymously.

On October 6, 1945, five months after the end of World War II
World War II
World War II, or the Second World War , was a global conflict lasting from 1939 to 1945, involving most of the world's nations—including all of the great powers—eventually forming two opposing military alliances: the Allies and the Axis...
in Germany, the SZ was the first newspaper to receive a license from the U.S. military administration of Bavaria. The first issue was published the same evening. The first article begins with:

For the first time since the collapse of the brown rule of terror
Nazi Germany
Nazi Germany , also known as the Third Reich , but officially called German Reich from 1933 to 1943 and Greater German Reich from 26 June 1943 onward, is the name commonly used to refer to the state of Germany from 1933 to 1945, when it was a totalitarian dictatorship ruled by...
, a newspaper run by Germans is published in Munich. It is limited by the political necessities of our days, but it is not bound by censorship, nor gagged by constraints of conscience.


The front page of the first issue can be read here (PDF).

In spring 2004, SZ launched the Süddeutsche Bibliothek. Each week, one out of 50 famous novels of the 20th century was published as hardcover for € 4.90 (approx. $6), available at certain newsstands and in book shops. Later a series of 50 influential movies on DVD followed. In late 2005 a series of children books continued this branch of special editions.

The circulation is 442,000, reaching over 1.1 million readers daily, making SZ the largest broadsheet daily published in German
German language
German is a West Germanic language, related to and classified alongside English and Dutch. With an estimated 90 – 98 million native speakers, German is one of the world's major languages and is the most widely-spoken first language in the European Union....
. Forty correspondents report from Germany and abroad.

The online content Süddeutsche.de, formerly SZonNe, is created and maintained by 25 journalists. Circa 140 million clicks are received on Süddeutsche.de pages. Sued-café is the virtual lounge for SZ readers.