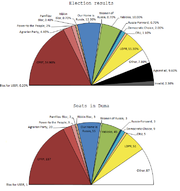 The election law adopted for the 1995 election was similar to that adopted for the 1993 election, with some minor modifications. First, to secure a place on the proportional representation ballot, parties had to have registered with the Ministry of Justice no later than six months before the election, and the number of signatures they had to gather rose from 100,000 to 200,000. Second, invalid votes were now included in the calculation of the 5.0 percent threshold. Third, on the single-member district ballot, party endorsements of candidates were indicated.

Out of the forty three parties and coalitions contesting the elections, only four cleared the 5% threshold to qualify for the proportional seats.

Our Home Is Russia had weightier resources and soon acquired the nickname
of “party of power” for its reliance on elite political and economic office
holders. It was also referred to as “Our Home Is Gazprom” for its close ties to
Gazprom’s substantial financial resources. Most of the cabinet ministers joined
the bloc, and a number of business leaders and regional political elites affiliated
with it. However, almost no other parties entered it, and many SMD candidates
who had initially affiliated with the party soon left it. One of the early parties
to enter the bloc, Sergei Shakhrai’s Party of Russian Unity and Concord, also
deserted it in August. In the election, theOur
Home Is Russia bloc took 10.1% of the vote, enough to form a faction in the
Duma but not enough to serve as a dominant or pivotal force in parliament or
in the regions. At its peak, the party claimed the membership of around one
third of Russia’s governors. However, both the center and regional elites made
only ephemeral commitments to Our Home is Russia.

As a result of these elections, the Communists
Communist Party of the Russian Federation
The Communist Party of the Russian Federation is a Russian political party. It is the second major political party in the Russian Federation.-History:...
and their satellites, the Agrarians and other left-wing deputies, controlled a little less than the half of the seats. The populist
Populism
Populism can be defined as an ideology, political philosophy, or type of discourse. Generally, a common theme compares "the people" against "the elite", and urges social and political system changes. It can also be defined as a rhetorical style employed by members of various political or social...
LDPR occasionally sided with the left
Left-wing politics
In politics, Left, left-wing and leftist generally refer to support for social change to create a more egalitarian society...
majority, but often supported the government. As in the previous Duma, the parliamentary groups of independent deputies had a significant influence on the balance of power in the parliament.