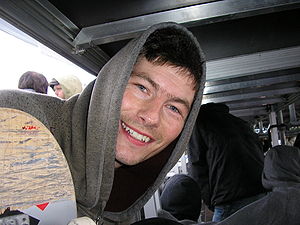 Rune Glifberg is a professional skateboarder
Skateboarding
Skateboarding is an action sport which involves riding and performing tricks using a skateboard.Skateboarding can be a recreational activity, an art form, a job, or a method of transportation. Skateboarding has been shaped and influenced by many skateboarders throughout the years. A 2002 report...
who currently resides in the Leucadia district of Encinitas
Encinitas, California
Encinitas is a coastal beach city in San Diego County, California. Located within Southern California, it is approximately north of San Diego in North County and about south of Los Angeles. As of the 2010 census, the city had a population of 59,518, up from 58,014 at the 2000 census. Encinitas is...
, California
California
California is a state located on the West Coast of the United States. It is by far the most populous U.S. state, and the third-largest by land area...
. Glifberg began skating at age 11 after a friend brought a board over to his house. In the early 1990s, Glifberg turned professional as a vert skater and made the trek across the Atlantic Ocean
Atlantic Ocean
The Atlantic Ocean is the second-largest of the world's oceanic divisions. With a total area of about , it covers approximately 20% of the Earth's surface and about 26% of its water surface area...
to the United States
United States
The United States of America is a federal constitutional republic comprising fifty states and a federal district...
. Glifberg signed on with Flip Skateboards
Flip Skateboards
Flip Skateboards is a US-based international skateboard company, owned by Jeremy Fox, Ian Deacon, and Geoff Rowley. The company produces skateboard decks, wheels, and clothing. Flip is distributed by NHS Distribution in the US.- History :...
, the company he still skates for, and immediately made a splash by trying wild stunt
Stunt
A stunt is an unusual and difficult physical feat, or any act requiring a special skill, performed for artistic purposes in TV, theatre, or cinema...
s in pools and on vert ramps
Half-pipe
A half-pipe is a structure used in gravity extreme sports such as snowboarding, skateboarding, skiing, freestyle BMX, and inline skating. The structure is wood, concrete, metal, earth, or snow. It resembles a cross section of a swimming pool, essentially two concave ramps , topped by copings and...
.

Rune now has a part ownership of Pipeline Distribution, and looks to continue his skateboarding for years to come.

Glifberg was also a playable character in the first five installments of Tony Hawk series of video games.

His second signature shoe with etnies is called the Forsvar, meaning defend or defense in Danish.

Rune is currently has a line of signature shoes with Converse. The Allston and the Rune Pro Mid.

Glifberg's Copenhagen based event company RunEvent was the organizer of 2010's "Burning of the Witch" skateboard contest at Amager Strandpark in Denmark. Burning of the Witch was made possible in conjunction with one of Rune's sponsors Volcom and Thrasher Magazine and displayed some of the best skateboarding Denmark has ever seen. RunEvent is currently organizing Rune's 25th skateboarding anniversary to be held at Fœlledparken, Copenhagen in the summer of 2011.

Rune is known for his deep bag of tricks. Rune is also known as the master of Kickflip Backside Lipslide.