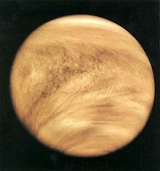 Encyclopedia
A runaway greenhouse effect is not a clearly defined term, but is understood to mean an event analogous to that which is believed to have happened in the early history of Venus
Venus
Venus is the second planet from the Sun, orbiting it every 224.7 Earth days. The planet is named after Venus, the Roman goddess of love and beauty. After the Moon, it is the brightest natural object in the night sky, reaching an apparent magnitude of −4.6, bright enough to cast shadows...
, where positive feedback
Positive feedback
Positive feedback is a process in which the effects of a small disturbance on a system include an increase in the magnitude of the perturbation. That is, A produces more of B which in turn produces more of A. In contrast, a system that responds to a perturbation in a way that reduces its effect is...
increased the strength of its greenhouse effect
Greenhouse effect
The greenhouse effect is a process by which thermal radiation from a planetary surface is absorbed by atmospheric greenhouse gases, and is re-radiated in all directions. Since part of this re-radiation is back towards the surface, energy is transferred to the surface and the lower atmosphere...
until its oceans boiled away. The term is not generally used by the IPCC
IPCC
IPCC may refer to:*Intergovernmental Panel on Climate Change, of the United Nations*Independent Police Complaints Commission, of England and Wales*Irish Peatland Conservation Council...
, which in one of its few mentions says a “runaway greenhouse effect” — analogous to Venus - appears to have virtually no chance of being induced by anthropogenic activities.

Other, less catastrophic events, may loosely be called a "runaway greenhouse". It has been hypothesised that such may have occurred at the Permian-Triassic extinction event
Permian-Triassic extinction event
The Permian–Triassic extinction event, informally known as the Great Dying, was an extinction event that occurred 252.28 Ma ago, forming the boundary between the Permian and Triassic geologic periods, as well as the Paleozoic and Mesozoic eras...
. Terrestrial climatologists often use the term 'abrupt'
Abrupt climate change
An abrupt climate change occurs when the climate system is forced to transition to a new state at a rate that is determined by the climate system itself, and which is more rapid than the rate of change of the external forcing...
, rather than 'runaway', when describing such scenarios. 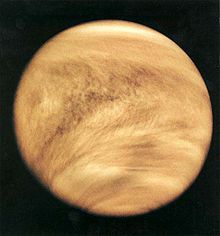 A runaway greenhouse effect involving CO2 and water vapor may have occurred on Venus
Venus
Venus is the second planet from the Sun, orbiting it every 224.7 Earth days. The planet is named after Venus, the Roman goddess of love and beauty. After the Moon, it is the brightest natural object in the night sky, reaching an apparent magnitude of −4.6, bright enough to cast shadows...
. In this scenario, early Venus may have had a global ocean. As the brightness of the early Sun increased, the amount of water vapor in the atmosphere increased, increasing the temperature and consequently increasing the evaporation of the ocean, leading eventually to the situation in which the oceans boiled, and all of the water vapor entered the atmosphere. On Venus today there is little water vapor in the atmosphere. If water vapor did contribute to the warmth of Venus at one time, this water is thought to have escaped to space. Venus is sufficiently strongly heated by the Sun that water vapor can rise much higher in the atmosphere and be split into hydrogen
Hydrogen
Hydrogen is the chemical element with atomic number 1. It is represented by the symbol H. With an average atomic weight of , hydrogen is the lightest and most abundant chemical element, constituting roughly 75% of the Universe's chemical elemental mass. Stars in the main sequence are mainly...
and oxygen
Oxygen
Oxygen is the element with atomic number 8 and represented by the symbol O. Its name derives from the Greek roots ὀξύς and -γενής , because at the time of naming, it was mistakenly thought that all acids required oxygen in their composition...
by ultraviolet light. The hydrogen can then escape from the atmosphere and the oxygen recombines. Carbon dioxide, the dominant greenhouse gas in the current Venusian atmosphere, likely owes its larger concentration to the weakness of carbon recycling as compared to Earth
Earth
Earth is the third planet from the Sun, and the densest and fifth-largest of the eight planets in the Solar System. It is also the largest of the Solar System's four terrestrial planets...
, where the carbon dioxide emitted from volcanoes is efficiently subducted
Subduction
In geology, subduction is the process that takes place at convergent boundaries by which one tectonic plate moves under another tectonic plate, sinking into the Earth's mantle, as the plates converge. These 3D regions of mantle downwellings are known as "Subduction Zones"...
into the Earth by plate tectonics on geologic time scales.

The situation on Earth is very different from that which existed on Venus
Venus
Venus is the second planet from the Sun, orbiting it every 224.7 Earth days. The planet is named after Venus, the Roman goddess of love and beauty. After the Moon, it is the brightest natural object in the night sky, reaching an apparent magnitude of −4.6, bright enough to cast shadows...
, as any terrestrial runaway effect is not irreversible on geological timescales. Potential runaway greenhouse effects on Earth may involve the carbon cycle
Carbon cycle
The carbon cycle is the biogeochemical cycle by which carbon is exchanged among the biosphere, pedosphere, geosphere, hydrosphere, and atmosphere of the Earth...
, but unlike Venus will not involve boiling of the oceans. Earth's climate has swung repeatedly between warm periods and ice age
Ice age
An ice age or, more precisely, glacial age, is a generic geological period of long-term reduction in the temperature of the Earth's surface and atmosphere, resulting in the presence or expansion of continental ice sheets, polar ice sheets and alpine glaciers...
s during its history. In the current climate the gain of the positive feedback effect from evaporating water is well below that which is required to boil away the oceans. Climate scientist John Houghton
John T. Houghton
As co-chair of the IPCC, he defends the IPCC process, in particular against charges of failure to consider non-CO2 explanations of climate change. In evidence to, the Select Committee on Science and Technology in 2000 he said:...
has written that "[there] is no possibility of [Venus's] runaway greenhouse conditions occurring on the Earth".