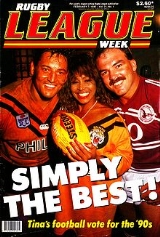 Encyclopedia
Rugby League Week is the second highest selling Australia
Australia
Australia , officially the Commonwealth of Australia, is a country in the Southern Hemisphere comprising the mainland of the Australian continent, the island of Tasmania, and numerous smaller islands in the Indian and Pacific Oceans. It is the world's sixth-largest country by total area...
n rugby league
Rugby league
Rugby league football, usually called rugby league, is a full contact sport played by two teams of thirteen players on a rectangular grass field. One of the two codes of rugby football, it originated in England in 1895 by a split from Rugby Football Union over paying players...
magazine
Magazine
Magazines, periodicals, glossies or serials are publications, generally published on a regular schedule, containing a variety of articles. They are generally financed by advertising, by a purchase price, by pre-paid magazine subscriptions, or all three...
, behind major competitor Big League
Big League
Big League is the official magazine of the National Rugby League and that of the NRL's forerunners, the New South Wales Rugby League and Australian Rugby League competitions. Its predecessor, The Rugby League News, was first published in 1920; in 1974 it was rebadged as Big League.It also serves as...
. It is published weekly (on Wednesdays) during the Australian rugby league season, which runs from March to late September (roughly corresponding to the southern hemisphere autumn
Autumn
Autumn is one of the four temperate seasons. Autumn marks the transition from summer into winter usually in September or March when the arrival of night becomes noticeably earlier....
and winter
Winter
Winter is the coldest season of the year in temperate climates, between autumn and spring. At the winter solstice, the days are shortest and the nights are longest, with days lengthening as the season progresses after the solstice.-Meteorology:...
) and has been published continuously since 1970. In 2001 the magazine's name was changed to League Week, to avoid confusion with "that other game for lovers of forward passes, knock-ons, and penalty goals"
Rugby union
Rugby union, often simply referred to as rugby, is a full contact team sport which originated in England in the early 19th century. One of the two codes of rugby football, it is based on running with the ball in hand...
. It reverted to Rugby League Week in 2003. It is currently owned by Australian Consolidated Press
Australian Consolidated Press
ACP Magazines , a subsidiary of the Nine Entertainment Co., is an Australian media company. It publishes the Australian Women's Weekly and the Australian edition of Woman's Day....
.

Each edition contains previews of the games to be played in the next NRL round, running from Friday to Monday. Details of every match from the previous round are also included: the games are assessed and each player who took the field, as well as the referee, is given a rating. Details of when and by whom points were scored are also included. (Before the formation of the Brisbane Broncos
Brisbane Broncos
The Brisbane Broncos are an Australian professional rugby league football club based in the city of Brisbane, the capital of the state of Queensland. Founded in 1988, the Broncos play in Australasia's elite competition, the National Rugby League premiership. They have won six premierships and two...
, these ratings and details were also given for the Brisbane Rugby League competition.) Results, but not ratings, are published for most notable rugby league competitions in Australia, as well as major competitions in New Zealand
New Zealand
New Zealand is an island country in the south-western Pacific Ocean comprising two main landmasses and numerous smaller islands. The country is situated some east of Australia across the Tasman Sea, and roughly south of the Pacific island nations of New Caledonia, Fiji, and Tonga...
and Great Britain
Great Britain
Great Britain or Britain is an island situated to the northwest of Continental Europe. It is the ninth largest island in the world, and the largest European island, as well as the largest of the British Isles...
.


Player of the Year award

Related to the rating of players ever since Rugby League Week was first published during the 1970 season has been its Player of the Year award.

Since 1978, players have been rated out of ten for every game. To deal with absences from club rugby due to interstate and Test duty, the five lowest scores of every player are deleted from their final score. After these five lowest scores are removed, the player with the highest score wins the award.

From 1970 to 1977, the method of judging was the same except that players were awarded points out of five instead of ten.