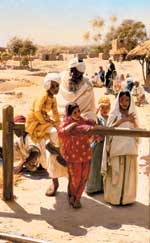 Rudolf Swoboda the younger (1859–1914) was a 19th-century Austria
Austria
Austria , officially the Republic of Austria , is a landlocked country of roughly 8.4 million people in Central Europe. It is bordered by the Czech Republic and Germany to the north, Slovakia and Hungary to the east, Slovenia and Italy to the south, and Switzerland and Liechtenstein to the...
n painter, born in Vienna
Vienna
Vienna is the capital and largest city of the Republic of Austria and one of the nine states of Austria. Vienna is Austria's primary city, with a population of about 1.723 million , and is by far the largest city in Austria, as well as its cultural, economic, and political centre...
. He studied under Leopold Carl Müller
Leopold Müller (painter)
Leopold Carl Müller was an Austrian genre painter.-Biography:...
, and voyaged with him to Egypt
Egypt
Egypt , officially the Arab Republic of Egypt, Arabic: , is a country mainly in North Africa, with the Sinai Peninsula forming a land bridge in Southwest Asia. Egypt is thus a transcontinental country, and a major power in Africa, the Mediterranean Basin, the Middle East and the Muslim world...
in 1880. He was a well-known Orientalist
Orientalism
Orientalism is a term used for the imitation or depiction of aspects of Eastern cultures in the West by writers, designers and artists, as well as having other meanings...
.

In 1886, Queen Victoria commissioned Swoboda to paint several of a group of Indian artisans who had been brought to Windsor as part of the Golden Jubilee
Golden Jubilee
A Golden Jubilee is a celebration held to mark a 50th anniversary.- In Thailand :King Bhumibol Adulyadej, the world's longest-reigning monarch, celebrated his Golden Jubilee on 9 June 1996.- In the Commonwealth Realms :...
preparations. Victoria liked the resulting paintings so much that she paid Swoboda's way to India to paint more of her Indian subjects.

Swoboda painted many of the ordinary people of India in a grouping of small (no more than eight inches high) paintings which resulted. 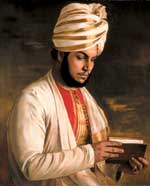 Most of these Indian paintings hang at Osborne House
Osborne House
Osborne House is a former royal residence in East Cowes, Isle of Wight, UK. The house was built between 1845 and 1851 for Queen Victoria and Prince Albert as a summer home and rural retreat....
, once Victoria's residence on the Isle of Wight
Isle of Wight
The Isle of Wight is a county and the largest island of England, located in the English Channel, on average about 2–4 miles off the south coast of the county of Hampshire, separated from the mainland by a strait called the Solent...
.
The source of this article is wikipedia, the free encyclopedia.  The text of this article is licensed under the GFDL.