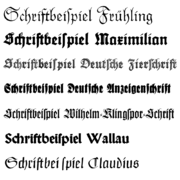 Rudolf Koch was a leading German
Germany
Germany , officially the Federal Republic of Germany , is a federal parliamentary republic in Europe. The country consists of 16 states while the capital and largest city is Berlin. Germany covers an area of 357,021 km2 and has a largely temperate seasonal climate...
calligrapher, typographic artist and teacher
Teacher
A teacher or schoolteacher is a person who provides education for pupils and students . The role of teacher is often formal and ongoing, carried out at a school or other place of formal education. In many countries, a person who wishes to become a teacher must first obtain specified professional...
, born in Nuremberg
Nuremberg
Nuremberg[p] is a city in the German state of Bavaria, in the administrative region of Middle Franconia. Situated on the Pegnitz river and the Rhine–Main–Danube Canal, it is located about north of Munich and is Franconia's largest city. The population is 505,664...
. He was primarily a calligrapher with the Gebr. Klingspor foundry. He created several typeface
Typeface
In typography, a typeface is the artistic representation or interpretation of characters; it is the way the type looks. Each type is designed and there are thousands of different typefaces in existence, with new ones being developed constantly....
s, in both fraktur and roman
Roman type
In typography, roman is one of the three main kinds of historical type, alongside blackletter and italic. Roman type was modelled from a European scribal manuscript style of the 1400s, based on the pairing of inscriptional capitals used in ancient Rome with Carolingian minuscules developed in the...
styles. Fritz Kredel
Fritz Kredel
Fritz Kredel was a German graphic designer who was born in Michelstadt-im-Odenwald. In his early years, he studied under Rudolf Koch at Offenbach School of Design, and developed skills in woodcuts. Koch and Kredel collaborated on A Book of Signs and The Book of Flowers...
studied under Koch at the Offenbach School of Design.

Koch wrote a book containing 493 old-world symbols, monograms and runes entitled The Book of Signs (reprinted in 1955, in the Dover
Dover Publications
Dover Publications is an American book publisher founded in 1941 by Hayward Cirker and his wife, Blanche. It publishes primarily reissues, books no longer published by their original publishers. These are often, but not always, books in the public domain. The original published editions may be...
Pictorial Archive Series). He had also a column in the magazine Die zeitgemäße Schrift, a magazine of design published by Heintze & Blanckertz
Heintze & Blanckertz
Heintze & Blanckertz was the first German manufacturer of dip pens. It was founded in 1842 in Oranienburg near Berlin. Today the company is located in Wehrheim near Frankfurt.- History :...
.