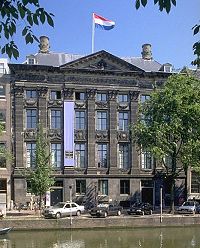 The Royal Netherlands Academy of Arts and Sciences (In Dutch: Koninklijk
Koninklijk
Koninklijk or Koninklijke is an honorary title given to certain companies and non-profit organizations in Belgium and the Netherlands, by the King or Queen in the respective country. It was first introduced by Louis Bonaparte in 1807, the King of the Netherlands at that time, who awarded the title...
e Nederlandse Akademie van Wetenschappen, abbreviated: KNAW) is an organisation dedicated to the advancement of science
Science
Science is a systematic enterprise that builds and organizes knowledge in the form of testable explanations and predictions about the universe...
and literature
Literature
Literature is the art of written works, and is not bound to published sources...
in the Netherlands
Netherlands
The Netherlands is a constituent country of the Kingdom of the Netherlands, located mainly in North-West Europe and with several islands in the Caribbean. Mainland Netherlands borders the North Sea to the north and west, Belgium to the south, and Germany to the east, and shares maritime borders...
. The Academy is housed at the Trippenhuis, Kloveniersburgwal 29, in Amsterdam
Amsterdam
Amsterdam is the largest city and the capital of the Netherlands. The current position of Amsterdam as capital city of the Kingdom of the Netherlands is governed by the constitution of August 24, 1815 and its successors. Amsterdam has a population of 783,364 within city limits, an urban population...
.

In addition to various advisory and administrative functions it operates a number of research institutes and awards many prizes, including the Lorentz Medal
Lorentz Medal
Lorentz Medal is a prize awarded every four years by the Royal Netherlands Academy of Arts and Sciences. It was established in 1925 on the occasion of the 50th anniversary of the doctorate of Hendrik Lorentz. This solid gold medal is given for important contributions to theoretical physics, though...
in theoretical physics, the Leeuwenhoek Medal
Leeuwenhoek Medal
The Leeuwenhoek Medal, established in 1877 by the Royal Netherlands Academy of Arts and Sciences, , in honor of the 17th- and 18th-century microscopist Antoni van Leeuwenhoek, is granted every ten years to the scientist judged to have made the most significant contribution to microbiology during...
in microbiology, and the Dr. A.H. Heineken Prizes.


Main functions of the Academy

The Academy advises the Dutch
Netherlands
The Netherlands is a constituent country of the Kingdom of the Netherlands, located mainly in North-West Europe and with several islands in the Caribbean. Mainland Netherlands borders the North Sea to the north and west, Belgium to the south, and Germany to the east, and shares maritime borders...
government on scientific matters. While its advice often pertains to genuine scientific concerns, it also counsels the government on such topics as policy on careers for researchers or the Netherlands' contribution to major international projects. The Academy offers solicited and unsolicited advice to parliament, ministries, universities and research institutes, funding agencies and international organisations.

Members and organization of the Academy

The members (at most 200 regular members younger than 65) are appointed for life by co-optation. Nominations for candidate membership by persons or organizations outside the Academy are accepted. The acceptance criterion is delivered scientific achievements. Academy membership is therefore regarded as a great honor, and prestigious. Besides regular members, there are retired members (members older than 65 years old), regular members living abroad, foreign members, and corresponding members.

The Royal Netherlands Academy of Arts and Sciences has long embraced the entire field of learning. The Royal Academy comprises two departments:

Both departments have their own board. The departments, in turn, are divided into sections. The highest organ in the Academy is the general meeting of members, the united meeting of both departments. The president was Frits van Oostrom
Frits van Oostrom
Frits van Oostrom , born in Utrecht, Netherlands, is University Professor for the Humanities at the Utrecht University. In 1999 he was a visiting Professor at Harvard for the Erasmus Chair. From September 2004 to June 2005, he was a fellow of the Netherlands Institute for Advanced Study . He was...
until 1 May 2008, after which he was succeeded by Robbert Dijkgraaf
Robbert Dijkgraaf
Robertus Henricus "Robbert" Dijkgraaf is a Dutch mathematical physicist and string theorist.Robertus Henricus Dijkgraaf was born on 24 January 1960 in Ridderkerk, Netherlands. He currently lives in Amsterdam, Netherlands...
. Both van Oostrom in his leaving address and Dijkgraaf in his inaugural address have voiced their worries about the low level of funding in science in the Netherlands compared to almost all other western countries.

During the French occupation of the Dutch Republic
Dutch Republic
The Dutch Republic — officially known as the Republic of the Seven United Netherlands , the Republic of the United Netherlands, or the Republic of the Seven United Provinces — was a republic in Europe existing from 1581 to 1795, preceding the Batavian Republic and ultimately...
, it was founded as the Koninklijk Instituut van Wetenschappen, Letterkunde en Schoone Kunsten (Royal Institute of Sciences, Literature and Fine Arts) by Lodewijk Napoleon on May 4, 1808. After the occupation, in 1816, it was renamed to Koninklijk-Nederlandsch Instituut van Wetenschappen, Letteren en Schoone Kunsten. In 1851 it was disbanded and reestablished as the Koninklijke Akademie van Wetenschappen and in 1938 acquired its present name.

Since 1812 the institute has resided in the Trippenhuis in Amsterdam. The Trippenhuis had been built by the rich family of merchants and politicians Trip in 1660-1662 and also served as the location of the Rijksmuseum from 1816 to 1885.

The institute was awarded the Gouden Ganzenveer
Gouden Ganzenveer
The Gouden Ganzenveer is a Dutch cultural award initiated in 1955, given annually to a person or organization of great significance to the written and printed word. Recipients are selected by an academy of people from the cultural, political, scientific, and corporate world. Members meet once a...
in 1955.

De Jonge Akademie (The Young Academy) is a society of younger science researchers, founded in 2005 as part of KNAW. Ten members are elected each year for a term of five years; members are scientists between 25 and 45 years old and are selected for a record of excellence in their research. It was modeled after the similar German
Germany
Germany , officially the Federal Republic of Germany , is a federal parliamentary republic in Europe. The country consists of 16 states while the capital and largest city is Berlin. Germany covers an area of 357,021 km2 and has a largely temperate seasonal climate...
Junge Akademie, and both of these academies in turn were used as models for the Global Young Academy
Global Young Academy
-Organization and membership:The academy is modeled after the German Junge Akademie and similar organizations in The Netherlands and Sudan.It has working groups on science education, science and society, early career development, and interdisciplinary issues....
.