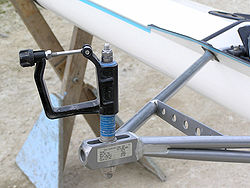 A rowlock (icon) or oarlock (US) is a brace
Brace
Brace may refer to:-Medical:* Brace , a device used to restrict or assist body movement* Back brace, a device limiting motion of the spine** Milwaukee brace, a kind of back brace used in the treatment of spinal curvatures...
that attaches an oar
Oar
An oar is an implement used for water-borne propulsion. Oars have a flat blade at one end. Oarsmen grasp the oar at the other end. The difference between oars and paddles are that paddles are held by the paddler, and are not connected with the vessel. Oars generally are connected to the vessel by...
to a boat. When a boat is rowed, the rowlock acts as a fulcrum, and, in doing so, the propulsive force that the rower exerts on the water with the oar is transferred to the boat by the thrust force exerted on the rowlock.

On ordinary rowing craft, the rowlocks are attached to the gunwale
Gunwale
The gunwale is a nautical term describing the top edge of the side of a boat.Wale is the same word as the skin injury, a wheal, which, too, forms a ridge. Originally the gunwale was the "Gun ridge" on a sailing warship. This represented the strengthening wale or structural band added to the design...
s. In the sport of rowing
Rowing (sport)
Rowing is a sport in which athletes race against each other on rivers, on lakes or on the ocean, depending upon the type of race and the discipline. The boats are propelled by the reaction forces on the oar blades as they are pushed against the water...
, the rowlocks are attached to outrigger
Outrigger
An outrigger is a part of a boat's rigging which is rigid and extends beyond the side or gunwale of a boat.In an outrigger canoe and in sailboats such as the proa, an outrigger is a thin, long, solid, hull used to stabilise an inherently unstable main hull. The outrigger is positioned rigidly and...
s (often just called "riggers"), which project from the boat and provide greater leverage. In sport rowing, the rowlocks are normally U-shaped and attached to a vertical pin which allows the rowlock to pivot around the pin during the rowing stroke. They additionally have a locking mechanism across the top of the "U" to prevent the oar from unintentionally popping out of the rowlock.

Originally rowlocks were two wooden posts that the shaft of the oar nestled between.

The Norwegian municipalities of Fosnes
Fosnes
Fosnes is a municipality in Nord-Trøndelag county, Norway. It is part of the Namdalen region. The administrative centre of the municipality is the village of Dun on the island of Jøa. Other villages include Salsnes and Nufsfjord.-General information:...
, Radøy
Radøy
Radøy is an island municipality in the county of Hordaland, Norway. Radøy was created as a new municipality on 1 January 1964, after the merger of large parts of Hordabø, Manger, and Sæbø, and smaller parts of Austrheim and Lindås.-Name:...
and Tjøme
Tjøme
Tjøme is a municipality in Vestfold county, Norway. The administrative centre of the municipality is the village of Tjøme. The parish of Tjømø was established as a municipality on 1 January 1838 .-Name:...
have rowlocks in their coats-of-arms.
The source of this article is wikipedia, the free encyclopedia.  The text of this article is licensed under the GFDL.