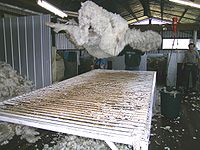 A roustabout is a labourer
Manual labour
Manual labour , manual or manual work is physical work done by people, most especially in contrast to that done by machines, and also to that done by working animals...
typically performing temporary, unskilled work. The term has traditionally been used to refer to traveling-circus
Circus
A circus is commonly a travelling company of performers that may include clowns, acrobats, trained animals, trapeze acts, musicians, hoopers, tightrope walkers, jugglers, unicyclists and other stunt-oriented artists...
workers, natural gas, or oil rig
Oil platform
An oil platform, also referred to as an offshore platform or, somewhat incorrectly, oil rig, is a lаrge structure with facilities to drill wells, to extract and process oil and natural gas, and to temporarily store product until it can be brought to shore for refining and marketing...
workers.

In the southern United States, mid to late 19th century, roustabout was used to refer to unskilled labour working on or loading and unloading steamboats. In reference to the Mississippi River fire and subsequent sinking of the Steamer Josie Harry:

A variation in spelling, rouseabout (often abbreviated to 'rousie'), is commonly used in Australia
Australia
Australia , officially the Commonwealth of Australia, is a country in the Southern Hemisphere comprising the mainland of the Australian continent, the island of Tasmania, and numerous smaller islands in the Indian and Pacific Oceans. It is the world's sixth-largest country by total area...
and New Zealand
New Zealand
New Zealand is an island country in the south-western Pacific Ocean comprising two main landmasses and numerous smaller islands. The country is situated some east of Australia across the Tasman Sea, and roughly south of the Pacific island nations of New Caledonia, Fiji, and Tonga...
to refer to shedhands who pick up wool after it has been taken from the sheep's back during shearing operations
Sheep shearing
Sheep shearing, shearing or clipping is the process by which the woollen fleece of a sheep is cut off. The person who removes the sheep's wool is called a shearer. Typically each adult sheep is shorn once each year...
.

"Roustabout" is also an official classification of natural gas and oil rig personnel. Roustabouts working on oil/gas fields in the north of the United States typically perform various jobs requiring little training. However, they frequently turn out to be long-term employees and take on more difficult and sometimes dangerous jobs as they gain experience. Most go on to at least become roughneck
Roughneck
Roughneck is a slang term for a person whose occupation is hard-manual labour, typically in a dangerous working environment. The term applies across a number of industries, but is most commonly associated with oil rigs...
s if they work for the rig company for more than a few months.

An early 2010 survey by Careercast.com of best and worst jobs — based on five criteria: environment, income, employment outlook, physical demands and stress — rated 'roustabout' as the worst job. Nonetheless, the anecdotal and subjective experience of an actual roustabout reveals the excitement of a challenging, adventurous job.

The term was used in Disney's 1941 animated film Dumbo
Dumbo
Dumbo is a 1941 American animated film produced by Walt Disney and released on October 23, 1941, by RKO Radio Pictures.The fourth film in the Walt Disney Animated Classics series, Dumbo is based upon the storyline written by Helen Aberson and illustrated by Harold Pearl for the prototype of a...
, during a musical scene in which a group of labourers pulled circus materials off the train for construction. Roustabout was a 1964 musical movie starring Elvis Presley
Elvis Presley
Elvis Aaron Presley was one of the most popular American singers of the 20th century. A cultural icon, he is widely known by the single name Elvis. He is often referred to as the "King of Rock and Roll" or simply "the King"....
, Barbara Stanwyck
Barbara Stanwyck
Barbara Stanwyck was an American actress. She was a film and television star, known during her 60-year career as a consummate and versatile professional with a strong screen presence, and a favorite of directors including Cecil B. DeMille, Fritz Lang and Frank Capra...
, and Joan Freeman
Joan Freeman
Joan Freeman is an American actress.Freeman was a child actor, having appeared in her first film in 1949 at the age of seven...
in a story set in a traveling carnival — for which Presley recorded the song titled "Roustabout". The term is used in the song "The Mariner's Revenge Song
The Mariner's Revenge Song
"The Mariner's Revenge Song" is a track by The Decemberists from their 2005 album Picaresque. The song describes a story of revenge.-Plot summary:...
", by The Decemberists
The Decemberists
The Decemberists are an indie folk rock band from Portland, Oregon, United States, fronted by singer/songwriter Colin Meloy. The other members of the band are Chris Funk , Jenny Conlee , Nate Query , and John Moen .The band's...
. "Roustabout" is also the name of a song recorded by the bluegrass band, Open Road, on their album Lucky Drive. The term is also used by Beats Antique
Beats Antique
Beats Antique is an experimental world fusion and electronic music group. Formed in 2007 in conjunction with producer Miles Copeland, the group has become noted for their mix of different genres as well as their live shows which mix samples and heavy percussives with Tribal Fusion dance and...
for two songs off of their album Collide.
The Slamball team Rousties
Slamball
Slamball is a form of basketball played with 4 trampolines in front of each net. It is played "full contact" and has boards around the court....
is named after a roustabout. Roustabout Ltd in the UK is a Marquee design and hire service specialising in festivals and event hire. (See: )
The source of this article is wikipedia, the free encyclopedia.  The text of this article is licensed under the GFDL.