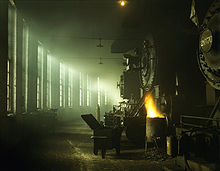 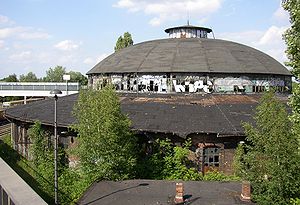 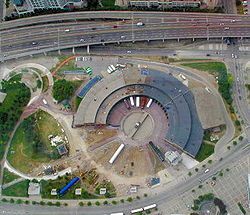 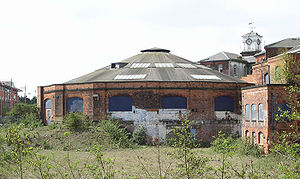 A roundhouse is a building used by railroad
Rail transport
Rail transport is a means of conveyance of passengers and goods by way of wheeled vehicles running on rail tracks. In contrast to road transport, where vehicles merely run on a prepared surface, rail vehicles are also directionally guided by the tracks they run on...
s for servicing locomotive
Locomotive
A locomotive is a railway vehicle that provides the motive power for a train. The word originates from the Latin loco – "from a place", ablative of locus, "place" + Medieval Latin motivus, "causing motion", and is a shortened form of the term locomotive engine, first used in the early 19th...
s. Roundhouses are large, circular or semicircular structures that were traditionally located surrounding or adjacent to turntables. The defining feature of the traditional roundhouse was the turntable, which facilitates access when the building is used for repair facilities or for storage of steam locomotive
Steam locomotive
A steam locomotive is a railway locomotive that produces its power through a steam engine. These locomotives are fueled by burning some combustible material, usually coal, wood or oil, to produce steam in a boiler, which drives the steam engine...
s.

Early steam locomotives normally travelled forwards only; although reverse operations capabilities were soon built into locomotive mechanisms, the controls were normally optimized for forward travel, and the locomotives often could not operate as well in reverse. Some passenger cars, such as observation car
Observation car
An observation car/carriage/coach is a type of railroad passenger car, generally operated in a passenger train as the last carriage, with windows on the rear of the car for passengers' viewing pleasure...
s, were also designed as late as the 1960s for operations in a particular direction. A turntable allowed a locomotive or other rolling stock
Rolling stock
Rolling stock comprises all the vehicles that move on a railway. It usually includes both powered and unpowered vehicles, for example locomotives, railroad cars, coaches and wagons...
to be turned around for the return journey.

Most modern diesel
Diesel locomotive
A diesel locomotive is a type of railroad locomotive in which the prime mover is a diesel engine, a reciprocating engine operating on the Diesel cycle as invented by Dr. Rudolf Diesel...
and electric locomotive
Electric locomotive
An electric locomotive is a locomotive powered by electricity from overhead lines, a third rail or an on-board energy storage device...
s can run equally well in either direction, and many have control cabs at each end. In addition, railroads often use multiple locomotives to pull trains, and even with locomotives that have distinct front and rear ends, the engines at opposing ends of a locomotive "consist" (a group of locomotives coupled
Coupling (railway)
A coupling is a mechanism for connecting rolling stock in a train. The design of the coupler is standard, and is almost as important as the railway gauge, since flexibility and convenience are maximised if all rolling stock can be coupled together.The equipment that connects the couplings to the...
together and controlled as a single unit) can be aligned so they face opposite directions. With such a setup, trains needing to reverse direction can use a technique known as a "run around," in which the engines are uncoupled from the train, pull around it on an adjacent track or siding, and reattach at the other end. The engineer changes operating ends from the original locomotive to the one on the opposite end of the locomotive consist.

Railroad terminals also use features such as balloon loop
Balloon loop
A balloon loop or turning loop allows a rail vehicle or train to reverse direction without having to shunt or even stop. Balloon loops can be useful for passenger trains and unit freight trains, such as coal trains....
s and wye
Wye (railroad)
A wye or triangular junction, in rail terminology, is a triangular shaped arrangement of rail tracks with a switch or set of points at each corner. In mainline railroads, this can be used at a rail junction, where three rail lines join, in order to allow trains to pass from any line to any other...
s (Commonwealth: triangle) to reverse the orientation of railroad equipment. Because of the advent of these practices, modern roundhouses are frequently not round and are simply large buildings used for servicing locomotives. Like much other railroad terminology, however, the structure has retained its traditional name. The alternative term engine-house encompasses both semi-circular and rectangular structures and broadly describes all buildings intended for storage and servicing of locomotives. Shops or workshops are buildings containing hoists and heavy machinery capable of major repairs beyond routine servicing. Some roundhouses include shop facilities internally or in adjoining buildings.

Probably the first railway roundhouse was built in 1839 at Derby
Derby
Derby , is a city and unitary authority in the East Midlands region of England. It lies upon the banks of the River Derwent and is located in the south of the ceremonial county of Derbyshire. In the 2001 census, the population of the city was 233,700, whilst that of the Derby Urban Area was 229,407...
, England
England
England is a country that is part of the United Kingdom. It shares land borders with Scotland to the north and Wales to the west; the Irish Sea is to the north west, the Celtic Sea to the south west, with the North Sea to the east and the English Channel to the south separating it from continental...
by the North Midland Railway
North Midland Railway
The North Midland Railway was a British railway company, which opened its line from Derby to Rotherham and Leeds in 1840.At Derby it connected with the Birmingham and Derby Junction Railway and the Midland Counties Railway at what became known as the Tri Junct Station...
. Some private workshops, such as that of Fenton, Murray and Jackson
Fenton, Murray and Jackson
Fenton, Murray and Jackson was an engineering company at the Round Foundry off Water Lane in Holbeck, Leeds, West Yorkshire, England.-Fenton, Murray and Wood:...
in Leeds
Leeds
Leeds is a city and metropolitan borough in West Yorkshire, England. In 2001 Leeds' main urban subdivision had a population of 443,247, while the entire city has a population of 798,800 , making it the 30th-most populous city in the European Union.Leeds is the cultural, financial and commercial...
(1831–1843), may previously have been laid out in a radial pattern. In a guidebook of the time we are told "The engine-house is a polygon of sixteen sides, and 190 feet (57.9 m) in diameter, lighted from a dome-shaped roof, of the height of 50 feet (15.2 m). It contains 16 lines of rails, radiating from a single turn-table in the centre: the engines, on their arrival, are taken in there, placed upon the turn-table, and wheeled into any stall that may be vacant. Each of the 16 stalls will hold two, or perhaps more, engines." This roundhouse narrowly escaped demolition when the works closed down, and was classified as a listed building. The Derby roundhouse was restored in 2010, being converted into a brand new site for Derby College
Derby College
Derby College is a further education centre with sites located within Derbyshire , England and the surrounding area...
, with a new addition called the 'Stephenson Building' including the other survival of demolition - the original Midland Counties Railway
Midland Counties Railway
The Midland Counties Railway was a railway company in the United Kingdom which existed between 1832 and 1844, connecting Nottingham, Leicester and Derby with Rugby and thence, via the London and Birmingham Railway, to London. The MCR system connected with the North Midland Railway and the...
workshop. The new site was opened in September 2009. Tours can be arranged through Derby Tourist Information Centre.

Since the great dieselisation
Dieselisation
Dieselisation or dieselization is a term generally used for the increasingly common use of diesel fuel in vehicles, as opposed to gasoline or steam engines.-Water Transport:...
era of the 1940s and 1950s, many roundhouses have been demolished or put to other uses, but a few still stand and remain in use on the railroads. Early roundhouses were too small for later locomotives: The Roundhouse, Chalk Farm
Chalk Farm
Chalk Farm is an area of north London, England. It lies directly to the north of Camden Town and its underground station is the closest tube station to the nearby, upmarket neighbourhood of Primrose Hill....
, London
London
London is the capital city of :England and the :United Kingdom, the largest metropolitan area in the United Kingdom, and the largest urban zone in the European Union by most measures. Located on the River Thames, London has been a major settlement for two millennia, its history going back to its...
was built in 1847, but was too small for its function within 20 years (it is now an arts centre). The unusual shape of the buildings can make them difficult to adapt to new uses, but can also be aesthetically appealing.

The Steam Whistle Brewing
Steam Whistle Brewing
Steam Whistle Brewing is a brewery in Toronto, Ontario. The company produces a premium pilsner lager packaged in distinctive green glass bottles and a non-twist cap. They only use four natural ingredients: spring water from Caledon, Ontario; hops from Germany; two-row barley; and yeast. In 2004,...
brewery in Toronto
Toronto
Toronto is the provincial capital of Ontario and the largest city in Canada. It is located in Southern Ontario on the northwestern shore of Lake Ontario. A relatively modern city, Toronto's history dates back to the late-18th century, when its land was first purchased by the British monarchy from...
, Ontario
Ontario
Ontario is a province of Canada, located in east-central Canada. It is Canada's most populous province and second largest in total area. It is home to the nation's most populous city, Toronto, and the nation's capital, Ottawa....
is located in the building known as the John Street Roundhouse
John Street Roundhouse
John Street Roundhouse is a preserved locomotive roundhouse in Toronto, Ontario. Built for the Canadian Pacific Railway in 1929-31 by Anglin-Norcross to replace the earlier John Street roundhouse built in 1897...
, a former Canadian Pacific Railway
Canadian Pacific Railway
The Canadian Pacific Railway , formerly also known as CP Rail between 1968 and 1996, is a historic Canadian Class I railway founded in 1881 and now operated by Canadian Pacific Railway Limited, which began operations as legal owner in a corporate restructuring in 2001...
steam locomotive repair facility.

The roundhouse
America's Historical Roundhouse
The Two Brothers Roundhouse, formerly the Walter Payton Roundhouse, America's Historical Roundhouse, and Chicago, Burlington, & Quincy Roundhouse and Locomotive Shop is a historic building converted to a restaurant in Aurora, Illinois...
located on the BNSF line
BNSF Railway
The BNSF Railway is a wholly owned subsidiary of Berkshire Hathaway Inc., and is headquartered in Fort Worth, Texas. It is one of seven North American Class I railroads and the second largest freight railroad network in North America, second only to the Union Pacific Railroad, its primary...
, with the last stop in Aurora, Illinois
Aurora, Illinois
Aurora is the second most populous city in the U.S. state of Illinois, and the 112th largest city in the United States. A suburb of Chicago, located west of the Loop, its population in 2010 was 197,899. Originally founded within Kane County, Aurora's city limits have expanded greatly over the past...
, was purchased by NFL football player Walter Payton
Walter Payton
Walter Jerry Payton was an American football running back who played for the Chicago Bears of the National Football League for thirteen seasons. Walter Payton was known around the NFL as "Sweetness". He is remembered as one of the most prolific running backs in the history of American football...
and has become Walter Payton's Roundhouse Brewery and Restaurant.