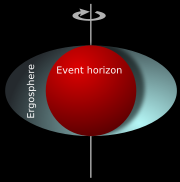 There are four known, exact, black hole solutions to Einstein's equations, which describe gravity in General Relativity
General relativity
General relativity or the general theory of relativity is the geometric theory of gravitation published by Albert Einstein in 1916. It is the current description of gravitation in modern physics...
. Two of these (the Kerr and Kerr-Newman black holes) rotate. It is generally believed that every black hole decays rapidly to a stable black hole; and, by the no-hair theorem, that (modulo quantum fluctuations) stable black holes can be completely described at any moment in time by these eleven numbers:
These numbers represent the conserved attributes of an object which can be determined from a distance by examining its electromagnetic and gravitational fields. All other variations in the black hole will either escape to infinity or be swallowed up by the black hole. This is because anything happening inside the black hole horizon cannot affect events outside it.

In terms of these properties, the four types of stable black holes can be defined as follows:

Rotating black holes are formed in the gravitational collapse
Gravitational collapse
Gravitational collapse is the inward fall of a body due to the influence of its own gravity. In any stable body, this gravitational force is counterbalanced by the internal pressure of the body, in the opposite direction to the force of gravity...
of a massive spinning star
Star
A star is a massive, luminous sphere of plasma held together by gravity. At the end of its lifetime, a star can also contain a proportion of degenerate matter. The nearest star to Earth is the Sun, which is the source of most of the energy on Earth...
or from the collapse of a collection of stars or gas with a total non-zero angular momentum. As most stars rotate it is expected that most black holes in nature are rotating black holes. In late 2006, astronomers reported estimates of the spin rates of black holes in the Astrophysical Journal
Astrophysical Journal
The Astrophysical Journal is a peer-reviewed scientific journal covering astronomy and astrophysics. It was founded in 1895 by the American astronomers George Ellery Hale and James Edward Keeler. It publishes three 500-page issues per month....
. A black hole in the Milky Way, GRS 1915+105
GRS 1915+105
GRS 1915+105 or V1487 Aquilae is an X-ray binary star system which features a regular star and a black hole. It was discovered on August 15, 1992 by the WATCH all-sky monitor aboard Granat. "GRS" stands for "GRANAT source", "1915" is the right ascension and "105" is declination in units of 0.1...
, may rotate 1,150 times per second, approaching the theoretical upper limit.

The formation of a rotating black hole by a collapsar is thought to be observed as the emission of gamma ray burst
Gamma ray burst
Gamma-ray bursts are flashes of gamma rays associated with extremely energetic explosions that have been observed in distant galaxies. They are the most luminous electromagnetic events known to occur in the universe. Bursts can last from ten milliseconds to several minutes, although a typical...
s.


Conversion to a Schwarzschild black hole

A rotating black hole is a solution of Einstein's field equation. There are two known exact solutions, the Kerr metric
Kerr metric
The Kerr metric describes the geometry of empty spacetime around an uncharged axially-symmetric black-hole with an event horizon which is topologically a sphere. The Kerr metric is an exact solution of the Einstein field equations of general relativity; these equations are highly non-linear, which...
and the Kerr-Newman metric
Kerr-Newman metric
The Kerr–Newman metric is a solution of the Einstein–Maxwell equations in general relativity, describing the spacetime geometry in the region surrounding a charged, rotating mass. It is assumed that the cosmological constant equals zero...
, which are believed to be representative of all rotating black hole solutions, in the exterior region.