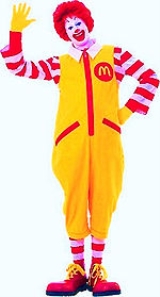 Encyclopedia
Ronald McDonald is a clown
Clown
Clowns are comic performers stereotypically characterized by the grotesque image of the circus clown's colored wigs, stylistic makeup, outlandish costumes, unusually large footwear, and red nose, which evolved to project their actions to large audiences. Other less grotesque styles have also...
character used as the primary mascot of the McDonald's
McDonald's
McDonald's Corporation is the world's largest chain of hamburger fast food restaurants, serving around 64 million customers daily in 119 countries. Headquartered in the United States, the company began in 1940 as a barbecue restaurant operated by the eponymous Richard and Maurice McDonald; in 1948...
fast-food restaurant chain. In television commercials, the clown inhabits a fantasy world called McDonaldland
McDonaldland
McDonaldland was a fantasy world used in the marketing for McDonald's restaurants. It was based on the "total concept and feel" of Sid and Marty Krofft's H.R. Pufnstuf television program. McDonaldland was inhabited by Ronald McDonald and other characters...
, and has adventures with his friends Mayor McCheese, the Hamburglar, Grimace, Birdie the Early Bird, and The Fry Kids. In recent years, McDonaldland has been largely phased out, and Ronald is instead shown interacting with normal kids in their everyday lives.

Many people work full-time making appearances in the Ronald McDonald costume, visiting children in hospitals. There are also Ronald McDonald Houses, where parents can stay overnight when visiting sick children in nearby chronic care
Chronic care
Chronic care refers to medical care which addresses preexisting or long term illness, as opposed to acute care which is concerned with short term or severe illness of brief duration. Chronic medical conditions include, but are not limited to, asthma, emphysema, chronic bronchitis, congestive heart...
facilities. Since August 2003, McDonald has been officially styled as the "Chief Happiness Officer" of the McDonald's Corporation.

The origin of Ronald McDonald involves Willard Scott
Willard Scott
Willard Herman Scott, Jr. is an American media personality and author best known for his television work on NBC's The Today Show and as the creator of the Ronald McDonald character.-Early years:...
(a local radio personality who also played Bozo the Clown
Bozo the Clown
Bozo the Clown is a clown character very popular in the United States, peaking in the 1960s as a result of widespread franchising in early television.Originally created by Alan W...
on WRC-TV
WRC-TV
WRC-TV, channel 4, is an owned and operated television station of the NBC television network, located in the American capital city of Washington, D.C...
in Washington, D.C.
Washington, D.C.
Washington, D.C., formally the District of Columbia and commonly referred to as Washington, "the District", or simply D.C., is the capital of the United States. On July 16, 1790, the United States Congress approved the creation of a permanent national capital as permitted by the U.S. Constitution....
from 1959 until 1962), who performed using the moniker "Ronald McDonald, the Hamburger-Happy Clown" in 1963 on three separate television spots. These were the first three television ads featuring the character.

Scott, who went on to become NBC-TV
NBC
The National Broadcasting Company is an American commercial broadcasting television network and former radio network headquartered in the GE Building in New York City's Rockefeller Center with additional major offices near Los Angeles and in Chicago...
's Today Show weatherman, claims to have "created Ronald McDonald" according to the following excerpt from his book Joy of Living:

At the time, Bozo
Bozo the Clown
Bozo the Clown is a clown character very popular in the United States, peaking in the 1960s as a result of widespread franchising in early television.Originally created by Alan W...
was the hottest children's show on the air. You could probably have sent Pluto the Dog or Dumbo the Elephant
Dumbo
Dumbo is a 1941 American animated film produced by Walt Disney and released on October 23, 1941, by RKO Radio Pictures.The fourth film in the Walt Disney Animated Classics series, Dumbo is based upon the storyline written by Helen Aberson and illustrated by Harold Pearl for the prototype of a...
over and it would have been equally as successful. But I was there, and I was Bozo ... There was something about the combination of hamburger
Hamburger
A hamburger is a sandwich consisting of a cooked patty of ground meat usually placed inside a sliced bread roll...
s and Bozo that was irresistible to kids ... That's why when Bozo went off the air a few years later, the local McDonald's people asked me to come up with a new character to take Bozo's place. So, I sat down and created Ronald McDonald.

George Voorhis
George Voorhis
George Bates Voorhis, Jr. was the co-creator of Ronald McDonald.-Career:He was a professional clown and magician and was Ronald McDonald in Southern California from the mid-sixties until the mid-eighties...
was a late 20th-century American performer who performed under various monikers as a clown. He claims to have been the original Ronald McDonald. A 1963 newspaper clipping from the Valley News (a San Fernando Valley newspaper) identifies George Voorhis as Ronald McDonald at a "local McDonald's restaurant". According to George Voorhis and Terry Teene
Terry Teene
Terry Teene is a musician, vocalist, songwriter, and entertainer, most commonly known for the early 1960s novelty hit "Curse of the Hearse". According to the Rockabilly Hall of Fame, he has recorded over 300 distinct songs and played on 100 or more released recordings, performing as a "major...
, in the early part of 1963, the pair created the original character and design of American advertising icon Ronald McDonald, including costume (featuring "French-fry bag pockets") and facial design, for a hired performance at a local Los Angeles, California area McDonald's restaurant.

McDonald's does not mention Voorhis or claim that Willard Scott created Ronald in their statement:

In 1965, Roy Burgold assigned Aye Jaye as Boss Clown worldwide in charge of hiring, writing, creating shows, media handling, training, and major events such as The White House appearances, Macy Days, etc., and finally opening Ronald worldwide for 35 years. Aye Jaye was responsible for the hiring of hundreds of past field Ronalds. 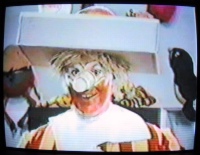 At any given time, there are dozens to hundreds of actors retained by McDonald's to appear as Ronald McDonald in restaurants and events. It is assumed, however, that the company uses only one actor at a time to play the character in national television commercials. Following is a list of such primary Ronald actors.


Various forms of the name "Ronald McDonald" as well as costume clown face
Clown
Clowns are comic performers stereotypically characterized by the grotesque image of the circus clown's colored wigs, stylistic makeup, outlandish costumes, unusually large footwear, and red nose, which evolved to project their actions to large audiences. Other less grotesque styles have also...
persona, etc. are registered trademarks of McDonald's. McDonald's trains performers to portray Ronald using identical mannerisms and costume, to contribute to the illusion that they are one character.

McDonald's marketing designers and stylists changed elements of the Ronald McDonald character, persona, style, costume and clown face when they adopted the clown as a trademark.

Charlton Comics
Charlton Comics
Charlton Comics was an American comic book publishing company that existed from 1946 to 1985, having begun under a different name in 1944. It was based in Derby, Connecticut...
obtained the license to publish four issues of a Ronald comic sold on newsstands in 1970–1971. Also, over the years several giveaway comics have been produced starring the character.

Ronald (with Grimace) appears in the 1984 Little Golden Book
Little Golden Books
Little Golden Books is a popular series of children's books. The first 12 titles were published on October 1, 1942:#Three Little Kittens#Bedtime Stories#Mother Goose#Prayers for Children#The Little Red Hen#Nursery Songs...
Ronald McDonald And The Tale of the Talking Plant, written by John Albano
John Albano
John Albano was an American writer who worked in the comic book industry. He was recognized for his work with the Shazam Award for Best Writer in 1971, and the Shazam Award for Best Individual Short Story in 1972 for "The Demon Within", in House of Mystery #201 .Albano's most famous co-creation...
and drawn by John Costanza
John Costanza
John Costanza is an artist and letterer who has worked in the American comic book industry. He has worked for both DC Comics and Marvel Comics. He was the letterer during Alan Moore's acclaimed run on Swamp Thing...
.

He appears for a few seconds in Mac and Me
Mac and Me
Mac and Me is a 1988 sci-fi fantasy film co-written and directed by Stewart Raffill about a "Mysterious Alien Creature" escapes from nefarious NASA agents and is befriended by a young boy who uses a wheelchair. Together, they try to find MAC's family, from whom he has been separated...
, during a birthday scene set at a McDonalds.

The Wacky Adventures of Ronald McDonald was a series of retail animated
Animation
Animation is the rapid display of a sequence of images of 2-D or 3-D artwork or model positions in order to create an illusion of movement. The effect is an optical illusion of motion due to the phenomenon of persistence of vision, and can be created and demonstrated in several ways...
direct-to-video
Direct-to-video
Direct-to-video is a term used to describe a film that has been released to the public on home video formats without being released in film theaters or broadcast on television...
features produced by the ka-chew! division of Klasky-Csupo for the McDonald's
McDonald's
McDonald's Corporation is the world's largest chain of hamburger fast food restaurants, serving around 64 million customers daily in 119 countries. Headquartered in the United States, the company began in 1940 as a barbecue restaurant operated by the eponymous Richard and Maurice McDonald; in 1948...
fast-food restaurant chain. A total of six forty-minute tapes were produced, released at various times between 1998 and 2003.

Ronald McDonald is also the subject of a video game developed by Sega, and released in Japan in 1994. 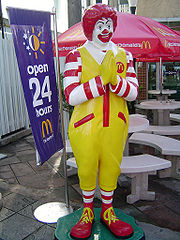 In Thailand
Thailand
Thailand , officially the Kingdom of Thailand , formerly known as Siam , is a country located at the centre of the Indochina peninsula and Southeast Asia. It is bordered to the north by Burma and Laos, to the east by Laos and Cambodia, to the south by the Gulf of Thailand and Malaysia, and to the...
, Ronald McDonald greets people in the traditional Thai "wai
Thai greeting
The Thai greeting referred to as the wai consists of a slight bow, with the palms pressed together in a prayer-like fashion. It has its origin in the Indic Añjali Mudrā, like the Indian namasté and the Cambodian sampeah...
" greeting gesture of both hands pressed together. The Thai version of the company mascot was created in 2002 by the local Thai franchise, McThai, as part of a "McThai in the Thai Spirit" campaign. The figure has also been exported to India and other countries where a similar gesture is used. In Japan
Japan
Japan is an island nation in East Asia. Located in the Pacific Ocean, it lies to the east of the Sea of Japan, China, North Korea, South Korea and Russia, stretching from the Sea of Okhotsk in the north to the East China Sea and Taiwan in the south...
, Ronald McDonald is called Donald McDonald due to a lack of a clear "r" sound in Japanese
Japanese language
is a language spoken by over 130 million people in Japan and in Japanese emigrant communities. It is a member of the Japonic language family, which has a number of proposed relationships with other languages, none of which has gained wide acceptance among historical linguists .Japanese is an...
. A pair of McDonald's advertisements for the Tomato McGrand in Japan feature either a "sexy" male and female, both dressed in modern clothing with the Ronald McDonald color scheme.