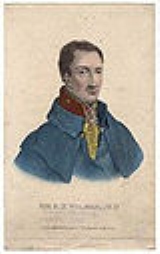 Encyclopedia
General
General (United Kingdom)
General is currently the highest peace-time rank in the British Army and Royal Marines. It is subordinate to the Army rank of Field Marshal, has a NATO-code of OF-9, and is a four-star rank....
Sir Robert Thomas Wilson Kt
Knight Bachelor
The rank of Knight Bachelor is a part of the British honours system. It is the most basic rank of a man who has been knighted by the monarch but not as a member of one of the organised Orders of Chivalry...
(17 August 1777 – 9 May 1849) was a British
United Kingdom
The United Kingdom of Great Britain and Northern IrelandIn the United Kingdom and Dependencies, other languages have been officially recognised as legitimate autochthonous languages under the European Charter for Regional or Minority Languages...
general and politician who served in Egypt
Egypt
Egypt , officially the Arab Republic of Egypt, Arabic: , is a country mainly in North Africa, with the Sinai Peninsula forming a land bridge in Southwest Asia. Egypt is thus a transcontinental country, and a major power in Africa, the Mediterranean Basin, the Middle East and the Muslim world...
, Prussia
Prussia
Prussia was a German kingdom and historic state originating out of the Duchy of Prussia and the Margraviate of Brandenburg. For centuries, the House of Hohenzollern ruled Prussia, successfully expanding its size by way of an unusually well-organized and effective army. Prussia shaped the history...
, and was seconded to the Imperial Russian Army
Imperial Russian Army
The Imperial Russian Army was the land armed force of the Russian Empire, active from around 1721 to the Russian Revolution of 1917. In the early 1850s, the Russian army consisted of around 938,731 regular soldiers and 245,850 irregulars . Until the time of military reform of Dmitry Milyutin in...
in 1812. He sat as the Liberal Member of Parliament
Member of Parliament
A Member of Parliament is a representative of the voters to a :parliament. In many countries with bicameral parliaments, the term applies specifically to members of the lower house, as upper houses often have a different title, such as senate, and thus also have different titles for its members,...
(MP) for Southwark
Southwark (UK Parliament constituency)
Southwark was a parliamentary constituency centred on the Southwark district of South London. It returned two Members of Parliament to the House of Commons of the English Parliament from 1295 to 1707, to the Parliament of Great Britain from 1707 to 1800, and to the Parliament of the United Kingdom...
from 1818 to 1831. He served as the Governor of Gibraltar
Governor of Gibraltar
The Governor and Commander-in-Chief of Gibraltar is the representative of the British monarch in the British overseas territory of Gibraltar. The Governor is appointed by the British Monarch on the advice of the British Government...
from 1842 until his death in 1849.

Born in London
London
London is the capital city of :England and the :United Kingdom, the largest metropolitan area in the United Kingdom, and the largest urban zone in the European Union by most measures. Located on the River Thames, London has been a major settlement for two millennia, its history going back to its...
, he was the grandson of a Leeds wool merchant, and the fourth child of painter and portraitist Benjamin Wilson (painter)
Benjamin Wilson (painter)
Benjamin Wilson was an English painter, printmaker and scientist .He was the 14th child of Major Wilson, a wealthy York clothier whose house was decorated by the French history painter, Jacques Parmentier...
. Orphaned at the age of twelve he was raised and educated by his uncle and guardian, William Bosville.

He eloped in his twenties with Jemima, the daughter of Colonel William Belford. She bore him thirteen children in the following 15 years.

In 1818, Wilson became an MP for Southwark
Southwark (UK Parliament constituency)
Southwark was a parliamentary constituency centred on the Southwark district of South London. It returned two Members of Parliament to the House of Commons of the English Parliament from 1295 to 1707, to the Parliament of Great Britain from 1707 to 1800, and to the Parliament of the United Kingdom...
. In 1821, now a Radical MP he attended the funeral of Queen Caroline
Caroline of Brunswick
Caroline of Brunswick-Wolfenbüttel was the Queen consort of King George IV of the United Kingdom from 29 January 1820 until her death...
(the wife of George IV
George IV of the United Kingdom
George IV was the King of the United Kingdom of Great Britain and Ireland and also of Hanover from the death of his father, George III, on 29 January 1820 until his own death ten years later...
), a very controversial figure whose treatment by her husband had led her to be celebrated by the 'loud' section of the general populace. Her supporters, considering that they were not being allowed by the authorities to celebrate this occasion as they wished, began to become unruly. Soldiers escorting the cortege but also on duty because of the Establishment's fear of the mob, upon being stoned, fired over the heads of the crowd. Wilson strode up and stated that, "It is quite disgraceful to continue firing in this manner, for the people are unarmed. Remember you are soldiers of Waterloo; do not lose your honours gained on that occasion. You have had cannon shot at your head, never mind a few stones." The firing ceased as the officer in charge recognised Wilson, and the troops, although maintaining their cohesion 'retired'. A few weeks later Wilson was dismissed from the Army by the Duke of York. He was, however, to again serve his country.