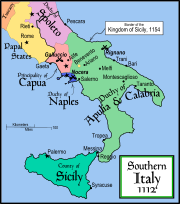 Robert II was the count of Aversa
Aversa
Aversa is a town and comune in the Province of Caserta in Campania southern Italy, about 15 kilometres north of Naples. It is the centre of an agricultural district, the agro aversano, producing wine and cheese...
and the prince of Capua  from 1127 until his death .

He was the only son and successor of Jordan II of Capua
Jordan II of Capua
Jordan II was the third son of Prince Jordan I of Capua and Princess Gaitelgrima, a daughter of Prince Guaimar IV of Salerno. He was, from at least May 1109, the lord of Nocera, and, after June 1120, Prince of Capua. The date and place of his brith are unknown, but it must have been later than...
. According to the Lombard
Lombards
The Lombards , also referred to as Longobards, were a Germanic tribe of Scandinavian origin, who from 568 to 774 ruled a Kingdom in Italy...
chronicler Falco of Benevento
Falco of Benevento
Falco of Benevento was an Italian twelfth-century historian, notary and scribe in the papal palace in Benevento, his native city, where he was born to high-standing parents.He is an important chronicler for the years between 1102 and 1139 in the Mezzogiorno...
, he was "of delicate constitution, he could endure neither labour nor hardship."

In 1132, Robert rebelled with many other south Italian vassals of the king of Sicily and with the support of Pope Innocent II
Pope Innocent II
Pope Innocent II , born Gregorio Papareschi, was pope from 1130 to 1143, and was probably one of the clergy in personal attendance on the antipope Clement III .-Early years:...
and his coalition of Louis VI of France
Louis VI of France
Louis VI , called the Fat , was King of France from 1108 until his death . Chronicles called him "roi de Saint-Denis".-Reign:...
, Henry I of England
Henry I of England
Henry I was the fourth son of William I of England. He succeeded his elder brother William II as King of England in 1100 and defeated his eldest brother, Robert Curthose, to become Duke of Normandy in 1106...
, and the Emperor Lothair II. Robert defeated Roger at the Battle of Nocera
Battle of Nocera
The Battle of Nocera or Scafati was the first major battle of Roger II of Sicily and one of two of his major defeats at the hands of Count Ranulf of Alife.-Background:...
on 24 July, but Roger burnt Aversa and, by 1134, forced Ranulf, count of Alife
Alife
-Other uses:* Artificial life* Artificial Life, Inc., , a mobile content and technology provider...
, and the nominally Byzantine
Byzantine Empire
The Byzantine Empire was the Eastern Roman Empire during the periods of Late Antiquity and the Middle Ages, centred on the capital of Constantinople. Known simply as the Roman Empire or Romania to its inhabitants and neighbours, the Empire was the direct continuation of the Ancient Roman State...
Duke Sergius VII of Naples
Sergius VII of Naples
Sergius VII was the thirty-ninth and last duke of Naples. He succeeded his father John VI on the Neapolitan throne in 1120 or 1123 at a time when Roger II of Sicily was rising rapidly in power...
to submit. Robert was given an ultimatum; if he wanted to keep his title, he must submit to Roger. After the death of Roger's wife, Elvira, and the false news of Roger's death, Robert went to Naples from Pisa with 8000 men. He was met by Rainulf and Duke Sergius when Roger arrived in June 1135, he again offered Robert a choice to keep his title. Roger made his third son Alfonso
Alfonso of Hauteville
Alfonso of Hauteville , third son of Roger II of Sicily and Elvira of Castile, was the prince of Capua from 1135 to his death.He was named after his maternal grandfather, Alfonso VI of Castile...
prince in his stead (1135).

When William was excommunicated by Pope Adrian IV
Pope Adrian IV
Pope Adrian IV , born Nicholas Breakspear or Breakspeare, was Pope from 1154 to 1159.Adrian IV is the only Englishman who has occupied the papal chair...
, and with (unjustified) rumours that the Emperor Frederick I Barbarossa was set to invade southern Italy, Prince Robert was tempted to make a comeback. He swore homage to Adrian retook Capua (1155), taking advantage of William's serious illness. However, in the spring of 1156 William recovered and took a fleet to the mainland. He dealt, first, with the more serious threat from Robert of Basunvilla and the other Apulian and Campanian rebels, but then he turned to Capua. Robert was captured. He might have been executed as a traitor, but instead William sent him as a prisoner to Palermo, where he was possibly blinded.

Robert left a son named Jordan who lived in Constantinople
Constantinople
Constantinople was the capital of the Roman, Eastern Roman, Byzantine, Latin, and Ottoman Empires. Throughout most of the Middle Ages, Constantinople was Europe's largest and wealthiest city.-Names:...
, where he served the Emperor Manuel I Comnenus as sebastos
Sebastos
Sebastos was an honorific used by the ancient Greeks to render the Roman imperial title of Augustus. From the late 11th century on, during the Komnenian period, it and variants derived from it formed the basis of a new system of court titles for the Byzantine Empire. The female form of the title...
and diplomat. He journeyed to Rome in 1166-1167 to try and aid the reunion of the Roman Catholic and Eastern Orthodox churches.
The source of this article is wikipedia, the free encyclopedia.  The text of this article is licensed under the GFDL.