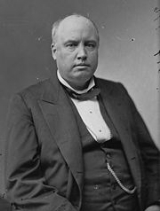 Overview
Robert Green "Bob" Ingersoll (August 11, 1833 – July 21, 1899) was a Civil War
American Civil War
The American Civil War was a civil war fought in the United States of America. In response to the election of Abraham Lincoln as President of the United States, 11 southern slave states declared their secession from the United States and formed the Confederate States of America ; the other 25...
veteran, American
United States
The United States of America is a federal constitutional republic comprising fifty states and a federal district...
political leader, and orator during the Golden Age of Freethought
Golden Age of Freethought
The golden age of freethought describes the socio-political movement promoting freethought that developed in the mid 19th-century United States. Freethought was a philosophical position that held that ideas and opinions should be based on science and reason, and not restricted by authority,...
, noted for his broad range of culture and his defense of agnosticism
Agnosticism
Agnosticism is the view that the truth value of certain claims—especially claims about the existence or non-existence of any deity, but also other religious and metaphysical claims—is unknown or unknowable....
. He was nicknamed "The Great Agnostic."
Robert Ingersoll was born in Dresden, New York
Dresden, Yates County, New York
----Dresden is a village in Yates County, New York, USA. The population was 307 at the 2000 census. The village was named after Dresden in Germany.The Village of Dresden is in the Town of Torrey and is twelve miles south of Geneva, New York...
. His father, John Ingersoll, was an abolitionist-leaning Presbyterian preacher, whose radical views forced his family to move frequently.

Need a paraphrase from ' memorial day ' by robert g ingersoll. anyone can help me?
More

An honest God is the noblest work of man.

This is derived from Alexander Pope's "An honest man's the noblest work of God." Motto of the essay "The Gods" (1876) as published in The Gods and Other Lectures (1879)

Like an armed warrior, like a plumed knight, James G. Blaine marched down the halls of the American Congress and threw his shining lance full and fair against the brazen forehead of every traitor to his country and every maligner of his fair reputation.

The rights of all are equal: justice, poised and balanced in eternal calm, will shake from the golden scales in which are weighed the acts of men, the very dust of prejudice and caste: No race, no color, no previous condition, can change the rights of men.