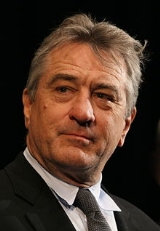 Overview
Robert De Niro, Jr. is an American actor, director and producer. His first major film roles were in Bang the Drum Slowly
Bang the Drum Slowly (film)
Bang the Drum Slowly is a 1973 film adaptation of the 1956 baseball novel of the same name by Mark Harris. It was previously dramatized in 1956 on the U.S. Steel Hour with Paul Newman and Albert Salmi....
and Mean Streets
Mean Streets
Mean Streets is a 1973 drama film directed by Martin Scorsese and written by Scorsese and Mardik Martin. The film stars Harvey Keitel and Robert De Niro. It was released by Warner Bros. on October 2, 1973...
, both in 1973. In 1974, he played the young Vito Corleone
Vito Corleone
Vito Andolini Corleone is a fictional character and the main character in Mario Puzo's novel The Godfather, as well as Francis Ford Coppola's The Godfather trilogy, where he was portrayed by Marlon Brando in The Godfather and by Robert De Niro in The Godfather Part II. Premiere Magazine listed Vito...
in The Godfather Part II
The Godfather Part II
The Godfather Part II is a 1974 American gangster film directed by Francis Ford Coppola from a script co-written with Mario Puzo. The film is both a sequel and a prequel to The Godfather, chronicling the story of the Corleone family following the events of the first film while also depicting the...
, a role that won him the Academy Award for Best Supporting Actor
Academy Award for Best Supporting Actor
Performance by an Actor in a Supporting Role is one of the Academy Awards of Merit presented annually by the Academy of Motion Picture Arts and Sciences to recognize an actor who has delivered an outstanding performance while working within the film industry. Since its inception, however, the...
.

His critically acclaimed, longtime collaboration
Martin Scorsese and Robert De Niro
Film director Martin Scorsese and actor Robert De Niro frequently collaborated throughout their careers, making a total of eight films together since 1973...
with Martin Scorsese
Martin Scorsese
Martin Charles Scorsese is an American film director, screenwriter, producer, actor, and film historian. In 1990 he founded The Film Foundation, a nonprofit organization dedicated to film preservation, and in 2007 he founded the World Cinema Foundation...
began with 1973's Mean Streets
Mean Streets
Mean Streets is a 1973 drama film directed by Martin Scorsese and written by Scorsese and Mardik Martin. The film stars Harvey Keitel and Robert De Niro. It was released by Warner Bros. on October 2, 1973...
, and earned De Niro an Academy Award for Best Actor
Academy Award for Best Actor
Performance by an Actor in a Leading Role is one of the Academy Awards of Merit presented annually by the Academy of Motion Picture Arts and Sciences to recognize an actor who has delivered an outstanding performance while working within the film industry...
for his portrayal of Jake LaMotta
Jake LaMotta
Giacobbe LaMotta , better known as Jake LaMotta, nicknamed "The Bronx Bull" and "The Raging Bull", is a former American world middleweight champion boxer...
in the 1980 film Raging Bull. He was also nominated for an Academy Award for his roles in Scorsese's Taxi Driver
Taxi Driver
Taxi Driver is a 1976 American drama film directed by Martin Scorsese and written by Paul Schrader. The film is set in New York City, soon after the Vietnam War. The film stars Robert De Niro and features Jodie Foster, Harvey Keitel, and Cybill Shepherd. The film was nominated for four Academy...
(1976) and Cape Fear
Cape Fear (1991 film)
Cape Fear is a 1991 thriller film directed by Martin Scorsese and a remake of the 1962 film of the same name. It stars Robert De Niro, Nick Nolte, Jessica Lange and Juliette Lewis and features cameos from Gregory Peck, Robert Mitchum and Martin Balsam, who all appeared in the 1962 original film...
(1991).

What music does he listen to
More

Some people say, "New York's a great place to visit, but I wouldn't want to live there." I say that about other places.

There's no such thing as not being afraid.

I didn't have a problem with rejection, because when you go into an audition, you're rejected already. There are hundreds of other actors. You're behind the eight ball when you go in there.

The hardest thing about being famous is that people are always nice to you. You're in a conversation and everybody's agreeing with what you're saying—even if you say something totally crazy. You need people who can tell you what you don't want to hear.

When I'm directing a great dramatic scene, part of me is saying, "Thank God I don't have to do that." Because I know how fucking hard it is to act. It's the middle of the night. It's freezing. You gotta do this scene. You gotta get it up to get to that point. And yet, as a director, you've got to get the actors to that point. It's hard either way.

As you get older, the more complicated things get. It's almost therapeutic to be doing simple things with the kids.

They're all animals anyway. All the criminals come out at night. Whores, skunk pussies, buggers, queens, fairies, dopers, junkies, sick, venal. Someday a real rain will come and wash all this scum off the streets.

As Travis Bickle in Taxi Driver

Better to be a king for a night than a schmuck for a lifetime.