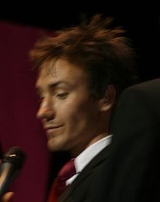 Encyclopedia
Rob Stewart is an Canadian
Canada
Canada is a North American country consisting of ten provinces and three territories. Located in the northern part of the continent, it extends from the Atlantic Ocean in the east to the Pacific Ocean in the west, and northward into the Arctic Ocean...
photographer and movie director
Film director
A film director is a person who directs the actors and film crew in filmmaking. They control a film's artistic and dramatic nathan roach, while guiding the technical crew and actors.-Responsibilities:...
/filmmaker, best known for making and directing the multi-award-winning movie Sharkwater.

Stewart was born in 1979, in Toronto, Ontario, Canada
Canada
Canada is a North American country consisting of ten provinces and three territories. Located in the northern part of the continent, it extends from the Atlantic Ocean in the east to the Pacific Ocean in the west, and northward into the Arctic Ocean...
, where he was raised. He began doing underwater photography
Underwater photography
Underwater photography is the process of taking photographs while under water. It is usually done while scuba diving, but can be done while snorkeling or swimming.-Overview:...
as a teenager, and became a scuba-diving trainer when he was eighteen years old.

Stewart holds a Bachelor's degree
Bachelor's degree
A bachelor's degree is usually an academic degree awarded for an undergraduate course or major that generally lasts for three or four years, but can range anywhere from two to six years depending on the region of the world...
in biology.

Rob Stewart got the idea to make the movie Sharkwater at age twenty-two, when he found out there was illegal long-lining in the marine reserve, while he was photographing sharks in the Galapagos Islands
Galápagos Islands
The Galápagos Islands are an archipelago of volcanic islands distributed around the equator in the Pacific Ocean, west of continental Ecuador, of which they are a part.The Galápagos Islands and its surrounding waters form an Ecuadorian province, a national park, and a...
, and the public did not respond when he tried to put out a message that the lining was killing the sharks. He travelled through fifteen countries for the next four years, studying and filming sharks for the film. Stewart often posts shark conservation notes and information on his Facebook
Facebook
Facebook is a social networking service and website launched in February 2004, operated and privately owned by Facebook, Inc. , Facebook has more than 800 million active users. Users must register before using the site, after which they may create a personal profile, add other users as...
page.

Stewart has also appeared on Loose Women
Loose Women
Loose Women is a British lunchtime television programme, first broadcast in 1999 on ITV. It consists of a panel of four women who interview celebrities and discuss topical issues, ranging from daily politics and current affairs, to celebrity gossip...
in one episode in 2008, Sidewalks Entertainment
Sidewalks Entertainment
Sidewalks Entertainment is a long-running, weekly American television series that is a combination of a talk show, magazine show and variety show featuring celebrity interviews, music, artistic and novelty acts, and rising performers...
in the 2007 episode "Sterling and Sharkwater", The Smart Woman Survival Guide
The Smart Woman Survival Guide
The Smart Woman Survival Guide is a Canadian situation comedy, filmed in Toronto, Ontario, currently in its third season. It airs on the W Network and CosmoTV. It was renewed for 26 further episodes before season one had finished shooting...
in the 2006 episode "Earth Day", and in The Best Years
The Best Years (TV series)
The Best Years is a Canadian teen drama series set in Boston, Massachusetts. The series was created by producer and writer of Degrassi: The Next Generation, Aaron Martin...
in the 2009 episode "Delirious".

Stewart has been nominated for eight film festival awards for Sharkwater, from the Hawaii International Film Festival, the Gen Art Film Festival, the Ft. Lauderdale Film Festival, and the Atlantic Film Festival. In 2006, he won the Special Jury Award for Documentaries, the Spirit of the Independent award, the People's Choice award for Best film, the Jury award for Best Documentary, and the Audience Award for Best film. The following year, he won the Audience and Best Feature awards at the Gen Art Film festival. In 2008, he received a Genie Award
Genie Award
Genie Awards are given out to recognize the best of Canadian cinema by the Academy of Canadian Cinema and Television. From 1949-1979, the awards were named the Canadian Film Awards...
nomination for Best Documentary. He also received a Genesis Award for Outstanding Documentary, and an Environmental Vision award at the 35th annual Vision awards; held in Los Angeles
Los Ángeles
Los Ángeles is the capital of the province of Biobío, in the commune of the same name, in Region VIII , in the center-south of Chile. It is located between the Laja and Biobío rivers. The population is 123,445 inhabitants...
, in 2008.