Encyclopedia
The Lee is a river in Ireland. It rises in the Shehy Mountains
Shehy mountains
The Shehy Mountains are a range of low mountains situated on the border between County Cork and County Kerry, in Ireland.-Geography and geology:...
on the western border of County Cork
County Cork
County Cork is a county in Ireland. It is located in the South-West Region and is also part of the province of Munster. It is named after the city of Cork . Cork County Council is the local authority for the county...
and flows eastwards through Cork City, where it splits in two for a short distance, creating an island on which Cork's city centre is built, and empties into the Celtic Sea
Celtic Sea
The Celtic Sea is the area of the Atlantic Ocean off the south coast of Ireland bounded to the east by Saint George's Channel; other limits include the Bristol Channel, the English Channel, and the Bay of Biscay, as well as adjacent portions of Wales, Cornwall, Devon, and Brittany...
at Cork Harbour
Cork Harbour
Cork Harbour is a natural harbour and river estuary at the mouth of the River Lee in County Cork, Ireland. It is one of several which lay claim to the title of "second largest natural harbour in the world by navigational area" . Other contenders include Halifax Harbour in Canada, and Poole Harbour...
on the south coast, one of the largest natural harbours in the world.

A hydro-electric scheme was built on the river, upstream from Cork City, and this part of the river now contains the Carrigadrohid
Carrigadrohid
Carrigadrohid: is a village in the Canovee Electoral Area of Mid-Cork, Ireland, situated on the north bank of the River Lee...
and Inniscarra reservoirs. The river is crossed by 42 bridges, 29 of which are in Cork City, and one tunnel
Jack Lynch Tunnel
The Jack Lynch Tunnel is an immersed tube tunnel and an integral part of the N25 southern ring road of Cork in Ireland. It is named after former Taoiseach, Jack Lynch, a native of Cork....
. The river also provides an 8 kilometres (5 mi) stretch of salmon fishing.

The River Lee has its source in the Shehy Mountains near Gougane Barra
Gougane Barra
Gougane Barra is a settlement, west of Macroom in County Cork, Ireland.The name Gougane Barra comes from Saint Finbarr, who is said to have built a monastery on an island in the lake nearby during the 6th century. The present ruins date from around 1700 when a priest called Denis O'Mahony...
, where there is a forest park, chapel, hotel, and shop

The Lee flows from the lake of Gougane Barra as a fast paced torrent, but by the town of Ballingeary
Ballingeary
Béal Átha an Ghaorthaidh is a village in the Shehy Mountains in County Cork, Ireland.The village is within the Gaeltacht and has an active Irish-language summer school, Coláiste na Mumhan...
it eases and flows into Lough Allua. Departing the lough, east, it again becomes rapid before flowing into the Inniscarra reservoir created by Inniscarra Dam. Moving on, it flows out of Inniscarra dam, a gentle river until it comes to Ballincollig
Ballincollig
Ballincollig is a satellite town in County Cork, Ireland, approximately 9 km west of Cork city. It is located beside the River Lee on the R608 regional road. In 2006 the population of Ballincollig DED was 16,308. The nearest towns include: Ballinora, Ovens, Killumney, Inniscarra, Blarney ,...
weir located in Ballincollig park. Here, it is dangerous to swimmers when in high water. It then flows into the city under Inniscarra bridge and flows parallel to the Carrigrohane road. Along this section gauges monitor the water levels from the Inniscara Dam. It flows over the Lee weir
Weir
A weir is a small overflow dam used to alter the flow characteristics of a river or stream. In most cases weirs take the form of a barrier across the river that causes water to pool behind the structure , but allows water to flow over the top...
and then is split into the north and south channel by a sluice
Sluice
A sluice is a water channel that is controlled at its head by a gate . For example, a millrace is a sluice that channels water toward a water mill...
. This area is popular for recreation, kayaking
Kayaking
Kayaking is the use of a kayak for moving across water. Kayaking and canoeing are also known as paddling. Kayaking is distinguished from canoeing by the sitting position of the paddler and the number of blades on the paddle...
and fishing
Fishing
Fishing is the activity of trying to catch wild fish. Fish are normally caught in the wild. Techniques for catching fish include hand gathering, spearing, netting, angling and trapping....
. The two channels join again at the Cork docks and enter the sea at Cobh
Cobh
Cobh is a seaport town on the south coast of County Cork, Ireland. Cobh is on the south side of Great Island in Cork Harbour. Facing the town are Spike Island and Haulbowline Island...
. 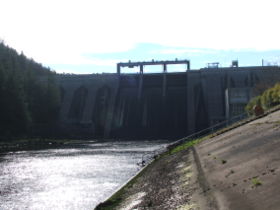 In November to December 2009 the river flooded
2009 Great Britain and Ireland floods
The 2009 Great Britain and Ireland floods was a weather event that affected parts of Great Britain and Ireland throughout November and into December 2009. November was the wettest month across the United Kingdom since records began in 1914 and was well above average temperatures. The worst affected...
, inflicting the worst damage on the City of Cork for over 800 years. The Lee Water Station was forced to shut down after being submerged under six metres of water, and resulted in 40% of Cork City (50,000 people) being without running water for over one week.
University College Cork was also flooded badly, resulting in lectures being canceled throughout the week. There was severe damage to their newly built IT building, the Western Gateway Building, situated next to the river. The building's basement was completely flooded, damaging the plant room and servers, and a 300 seat auditorium was flooded to near ceiling height.

To prevent further flooding, the ESB
Electricity Supply Board
The Electricity Supply Board , is a semi-state electricity company in Ireland. While historically a monopoly, the ESB now operates as a commercial semi-state concern in a liberalised and competitive market...
made a controversial decision to release water from the Inniscarra hydro-electric dam. This released 535 tonnes of water per second into the already flooded river, raising the flood to 1.5 metres in parts of the city centre. The ESB insisted this was an essential move, and if water had not been released, the flooding would have been much worse.