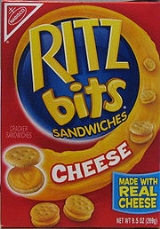 Encyclopedia
Ritz Crackers are a brand of snack cracker
Cracker (food)
A cracker is a baked good commonly made from grain flour dough and typically made in quantity in various hand-sized or smaller shapes. Flavorings or seasonings, such as salt, herbs, seeds, and/or cheese, may be added to the dough or sprinkled on top before baking...
introduced by Nabisco
Nabisco
Nabisco is an American brand of cookies and snacks. Headquartered in East Hanover, New Jersey, the company is a subsidiary of Illinois-based Kraft Foods. Nabisco's plant in Chicago, a production facility at 7300 S...
in 1934. Outside of the United States, the Ritz Cracker brand is made by a subsidiary of Kraft Foods
Kraft Foods
Kraft Foods Inc. is an American confectionery, food and beverage conglomerate. It markets many brands in more than 170 countries. 12 of its brands annually earn more than $1 billion worldwide: Cadbury, Jacobs, Kraft, LU, Maxwell House, Milka, Nabisco, Oscar Mayer, Philadelphia, Trident, Tang...
. They are circular in shape, salted lightly on one side, and have a small scalloped edge. A single serving (approximately 5 crackers) contains 79 calorie
Calorie
The calorie is a pre-SI metric unit of energy. It was first defined by Nicolas Clément in 1824 as a unit of heat, entering French and English dictionaries between 1841 and 1867. In most fields its use is archaic, having been replaced by the SI unit of energy, the joule...
s, 1 gram of protein
Protein
Proteins are biochemical compounds consisting of one or more polypeptides typically folded into a globular or fibrous form, facilitating a biological function. A polypeptide is a single linear polymer chain of amino acids bonded together by peptide bonds between the carboxyl and amino groups of...
and 4 grams of fat
Fat
Fats consist of a wide group of compounds that are generally soluble in organic solvents and generally insoluble in water. Chemically, fats are triglycerides, triesters of glycerol and any of several fatty acids. Fats may be either solid or liquid at room temperature, depending on their structure...
, or 70 calories and 2.5 grams of fat for the Whole Wheat variety. 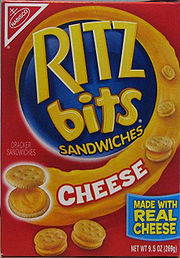 In the U.S. and Canada, Ritz Bits Sandwiches are sold. They are miniature-sized Ritz sandwiches with several types of filling between the two crackers. The flavors of filling used to be: Cheese, Peanut Butter, S'mores, and Peanut Butter and Jelly. A pizza version was sold in the early 1990s and again in the early 2000s. Plain Ritz Bits were also sold. Ritz Crackers were also available in a toasted crisp chip called Ritz Toasted Chips and in an elongated form known as Ritz Sticks.

For a while, there were two Ritz Bits flavors including Peanut Butter and Fudge, which consisted of half peanut butter
Peanut butter
Peanut butter is a food paste made primarily from ground dry roasted peanuts, popular in North America, Netherlands, United Kingdom, and parts of Asia, particularly the Philippines and Indonesia. It is mainly used as a sandwich spread, sometimes in combination as in the peanut butter and jelly...
and the other half fudge
Fudge
Fudge is a type of Western confectionery which is usually very sweet, and extremely rich. It is made by mixing sugar, butter, and milk and heating it to the soft-ball stage at , and then beating the mixture while it cools so that it acquires a smooth, creamy consistency...
, and the other Extreme Cheese. Extreme Cheese is similar to regular cheese flavor, except the cracker also contains cheese
Cheese
Cheese is a generic term for a diverse group of milk-based food products. Cheese is produced throughout the world in wide-ranging flavors, textures, and forms....
flavor in it.

Ritz Crackers in Canada are available in varieties such as Original, Low Salt, Reduced Fat, 100% Whole Grain, and Cheddar.

Ritz Snackwiches are also available, and Ritz Crackers are also a part of the Handi Snacks line, with Cheez Whiz and Kraft Peanut Butter.

Although the Ritz Chips in the US have been rebranded, the name is still available in Canada. Flavors include Original, Barbecue, Cheddar, Sour Cream & Onion, Multigrain, and Veggie.

Ritz Crackers are available in the United Kingdom in three varieties. Original and Cheese flavor are sold in 200 g boxes, and Ritz Cheese Sandwich (a cheesy filling sandwiches between two Ritz Crackers) is available in 125 g roll packs and 33 g snack packs.

Ritz Crackers are also available as the dippers for Dairylea
Dairylea (cheese)
Kraft Foods Dairylea Triangles, Dairylea Lunchables, and Dairylea Dunkers are a popular processed cheese product, available in the United Kingdom and the Republic of Ireland....
Dunkers and Philadelphia
Cream cheese
Cream cheese is a soft, mild-tasting, white cheese with a high fat content. Traditionally, it is made from unskimmed milk enriched with additional cream....
Snack.

Ritz Crackers were featured in the 1991 movie Regarding Henry
Regarding Henry
Regarding Henry is a 1991 American film drama starring Harrison Ford and Annette Bening, directed by Mike Nichols.The screenplay by J. J. Abrams focuses on a New York City lawyer who struggles to regain his memory and recover his speech and mobility after he survives a shooting.-Plot:Ambitious,...
. Henry, who suffered from amnesia
Amnesia
Amnesia is a condition in which one's memory is lost. The causes of amnesia have traditionally been divided into categories. Memory appears to be stored in several parts of the limbic system of the brain, and any condition that interferes with the function of this system can cause amnesia...
, could only recall the word "Ritz" from his past. This was taken to mean Ritz Crackers, but actually referred to the Ritz Carlton.

In the Seinfeld
Seinfeld
Seinfeld is an American television sitcom that originally aired on NBC from July 5, 1989, to May 14, 1998, lasting nine seasons, and is now in syndication. It was created by Larry David and Jerry Seinfeld, the latter starring as a fictionalized version of himself...
episode The Jacket, Kramer
Cosmo Kramer
Cosmo Kramer, usually referred to as simply "Kramer", is a fictional character on the American television sitcom Seinfeld , played by Michael Richards...
asks Jerry
Jerry Seinfeld
Jerome Allen "Jerry" Seinfeld is an American stand-up comedian, actor, writer, and television and film producer, known for playing a semi-fictional version of himself in the situation comedy Seinfeld , which he co-created and co-wrote with Larry David, and, in the show's final two seasons,...
: You got any of those Mini Ritzes? To which Jerry replies: I can't believe that I do.