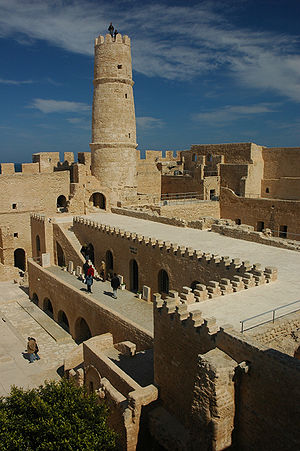 A ribat is an Arabic term for a small fortification
Fortification
Fortifications are military constructions and buildings designed for defence in warfare and military bases. Humans have constructed defensive works for many thousands of years, in a variety of increasingly complex designs...
as built along a frontier during the first years of the Muslim conquest of North Africa
Umayyad conquest of North Africa
The Umayyad conquest of North Africa continued the century of rapid Arab Muslim expansion following the death of Muhammad in 632 CE. By 640 the Arabs controlled Mesopotamia, had invaded Armenia, and were concluding their conquest of Byzantine Syria. Damascus was the seat of the Umayyad caliphate....
to house military volunteers, called the murabitun. These fortifications later served to protect commercial routes, and as centers for isolated Muslim communities.

In time, ribats became hostels for voyagers on major trade routes (Caravanserai
Caravanserai
A caravanserai, or khan, also known as caravansary, caravansera, or caravansara in English was a roadside inn where travelers could rest and recover from the day's journey...
) and refuges for mystics. In this last sense, the ribat tradition was perhaps one of the early sources of the Sufi mystic brotherhoods, and a type of the later zaouia
Zaouia
A zaouia or zawiya is an Islamic religious school or monastery. The term is Maghrebi and West African, roughly corresponding to the Eastern term madrassa...
or Sufi lodge, which spread into North Africa and from there across the Sahara
Sahara
The Sahara is the world's second largest desert, after Antarctica. At over , it covers most of Northern Africa, making it almost as large as Europe or the United States. The Sahara stretches from the Red Sea, including parts of the Mediterranean coasts, to the outskirts of the Atlantic Ocean...
to West Africa
West Africa
West Africa or Western Africa is the westernmost region of the African continent. Geopolitically, the UN definition of Western Africa includes the following 16 countries and an area of approximately 5 million square km:-Flags of West Africa:...
. Here the homes of marabout
Marabout
A marabout is a Muslim religious leader and teacher in West Africa, and in the Maghreb. The marabout is often a scholar of the Qur'an, or religious teacher. Others may be wandering holy men who survive on alms, Sufi Murshids , or leaders of religious communities...
s (religious teachers, usually Sufi) are termed ribats. Such places of spiritual retreat were termed Khanqah
Khanqah
A Khanqah, Khaniqah , ribat, zawiya, or tekke is a building designed specifically for gatherings of a Sufi brotherhood, or tariqa, and is a place for spiritual retreat and character reformation...
in Persian.
The source of this article is wikipedia, the free encyclopedia.  The text of this article is licensed under the GFDL.