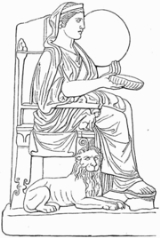 Overview
Rhea was the Titaness
Titan (mythology)
In Greek mythology, the Titans were a race of powerful deities, descendants of Gaia and Uranus, that ruled during the legendary Golden Age....
daughter of Uranus
Uranus (mythology)
Uranus , was the primal Greek god personifying the sky. His equivalent in Roman mythology was Caelus. In Ancient Greek literature, according to Hesiod in his Theogony, Uranus or Father Sky was the son and husband of Gaia, Mother Earth...
, the sky, and Gaia
Gaia (mythology)
Gaia was the primordial Earth-goddess in ancient Greek religion. Gaia was the great mother of all: the heavenly gods and Titans were descended from her union with Uranus , the sea-gods from her union with Pontus , the Giants from her mating with Tartarus and mortal creatures were sprung or born...
, the earth, in Greek mythology
Greek mythology
Greek mythology is the body of myths and legends belonging to the ancient Greeks, concerning their gods and heroes, the nature of the world, and the origins and significance of their own cult and ritual practices. They were a part of religion in ancient Greece...
. She was known as "the mother of gods". In earlier traditions, she was strongly associated with Gaia and Cybele
Cybele
Cybele , was a Phrygian form of the Earth Mother or Great Mother. As with Greek Gaia , her Minoan equivalent Rhea and some aspects of Demeter, Cybele embodies the fertile Earth...
, the Great Goddess
Great Goddess
Great Goddess refers to the concept of an almighty goddess, or to the concept of a mother goddess, including:*Great Goddess, anglicized form of the Latin Magna Dea*Great Goddess, anglicized form of the Sanskrit Mahadevi, the Shakti sum of all goddesses...
, and was later seen by the classical Greeks as the mother of the Olympian gods and goddesses
Twelve Olympians
The Twelve Olympians, also known as the Dodekatheon , in Greek mythology, were the principal deities of the Greek pantheon, residing atop Mount Olympus. Zeus, Hera, Poseidon, Demeter, Hestia, and Hades were siblings. Ares, Hermes, Hephaestus, Athena, Apollo, and Artemis were children of Zeus...
, though never dwelling permanently among them on Mount Olympus. The Romans identified Rhea with the Goddess Ops
Ops
In ancient Roman religion, Ops or Opis, was a fertility deity and earth-goddess of Sabine origin.-Mythology:Her husband was Saturn, the bountiful monarch of the Golden Age. Just as Saturn was identified with the Greek deity Cronus, Opis was identified with Rhea, Cronus' wife...
.

Cronus
Cronus
In Greek mythology, Cronus or Kronos was the leader and the youngest of the first generation of Titans, divine descendants of Gaia, the earth, and Uranus, the sky...
, Rhea's Titan
Titan (mythology)
In Greek mythology, the Titans were a race of powerful deities, descendants of Gaia and Uranus, that ruled during the legendary Golden Age....
brother and husband, castrated their father, Uranus.

What is the legacy of rhea.

How is rhea portrayed in roman mythology and in other world myths.
More