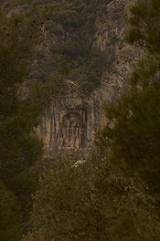 Overview
Cybele icon was a Phrygia
Phrygia
In antiquity, Phrygia was a kingdom in the west central part of Anatolia, in what is now modern-day Turkey. The Phrygians initially lived in the southern Balkans; according to Herodotus, under the name of Bryges , changing it to Phruges after their final migration to Anatolia, via the...
n form of the Earth Mother or Great Mother
Great Mother
The Great Mother refers to the concept of the mother goddess, including:*Great Mother, in the Mahayana and Vajrayana refers to Prajnaparamita, and the wisdom of the Madhyamaka...
. As with Greek Gaia
Gaia (mythology)
Gaia was the primordial Earth-goddess in ancient Greek religion. Gaia was the great mother of all: the heavenly gods and Titans were descended from her union with Uranus , the sea-gods from her union with Pontus , the Giants from her mating with Tartarus and mortal creatures were sprung or born...
(the "Earth"), her Minoan
Minoan civilization
The Minoan civilization was a Bronze Age civilization that arose on the island of Crete and flourished from approximately the 27th century BC to the 15th century BC. It was rediscovered at the beginning of the 20th century through the work of the British archaeologist Arthur Evans...
equivalent Rhea
Rhea (mythology)
Rhea was the Titaness daughter of Uranus, the sky, and Gaia, the earth, in Greek mythology. She was known as "the mother of gods". In earlier traditions, she was strongly associated with Gaia and Cybele, the Great Goddess, and was later seen by the classical Greeks as the mother of the Olympian...
and some aspects of Demeter
Demeter
In Greek mythology, Demeter is the goddess of the harvest, who presided over grains, the fertility of the earth, and the seasons . Her common surnames are Sito as the giver of food or corn/grain and Thesmophoros as a mark of the civilized existence of agricultural society...
, Cybele embodies the fertile Earth. She is a goddess of caverns and mountain
Mountain
Image:Himalaya_annotated.jpg|thumb|right|The Himalayan mountain range with Mount Everestrect 58 14 160 49 Chomo Lonzorect 200 28 335 52 Makalurect 378 24 566 45 Mount Everestrect 188 581 920 656 Tibetan Plateaurect 250 406 340 427 Rong River...
s, wall
Wall
A wall is a usually solid structure that defines and sometimes protects an area. Most commonly, a wall delineates a building and supports its superstructure, separates space in buildings into rooms, or protects or delineates a space in the open air...
s and fortresses, nature, and wild animals (especially lion
Lion
The lion is one of the four big cats in the genus Panthera, and a member of the family Felidae. With some males exceeding 250 kg in weight, it is the second-largest living cat after the tiger...
s and bee
Bee
Bees are flying insects closely related to wasps and ants, and are known for their role in pollination and for producing honey and beeswax. Bees are a monophyletic lineage within the superfamily Apoidea, presently classified by the unranked taxon name Anthophila...
s). She had a joint cult with her consort Attis
Attis
Attis was the consort of Cybele in Phrygian and Greek mythology. His priests were eunuchs, as explained by origin myths pertaining to Attis and castration...
, and was served by a priesthood of eunuchs.

In Rome, Cybele was known as Magna Mater ("Great Mother").

Im thinking of nameing my baby girl cybele. would this be a good name or is it too cult like.....

How did she die
More
x