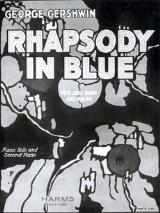 Overview
Rhapsody in Blue is a musical composition by George Gershwin
George Gershwin
George Gershwin was an American composer and pianist. Gershwin's compositions spanned both popular and classical genres, and his most popular melodies are widely known...
for solo piano and jazz band written in 1924, which combines elements of classical music with jazz
Jazz
Jazz is a musical style that originated at the beginning of the 20th century in African American communities in the Southern United States. It was born out of a mix of African and European music traditions. From its early development until the present, jazz has incorporated music from 19th and 20th...
-influenced effects.

Commissioned by bandleader Paul Whiteman
Paul Whiteman
Paul Samuel Whiteman was an American bandleader and orchestral director.Leader of the most popular dance bands in the United States during the 1920s, Whiteman's recordings were immensely successful, and press notices often referred to him as the "King of Jazz"...
, the composition was orchestrated by Ferde Grofé
Ferde Grofé
Ferde Grofé was a prominent American composer, arranger and pianist. During the 1920s and 1930s, he went by the name Ferdie Grofé.-Early life:...
three times, in 1924, in 1926, and finally in 1942. The piece received its premiere in a concert entitled An Experiment in Modern Music, which was held on February 12, 1924, in Aeolian Hall
Aeolian Hall (New York)
Aeolian Hall was a concert hall near Times Square in Midtown Manhattan, New York City located on the third floor of 29-33 West 42nd Street across the street from Bryant Park. The Aeolian Building was built in 1912 for the Aeolian Company, which manufactured pianos...
, New York
New York
New York is a state in the Northeastern region of the United States. It is the nation's third most populous state. New York is bordered by New Jersey and Pennsylvania to the south, and by Connecticut, Massachusetts and Vermont to the east...
, by Whiteman and his band with Gershwin playing the piano.

Does Rhapsody in Blue have a "twin" sound in an early composition?
More
x