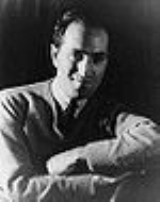 Overview
George Gershwin was an American composer and pianist. Gershwin's compositions spanned both popular and classical genres, and his most popular melodies are widely known. Among his best known works are the orchestral compositions Rhapsody in Blue
Rhapsody in Blue
Rhapsody in Blue is a musical composition by George Gershwin for solo piano and jazz band written in 1924, which combines elements of classical music with jazz-influenced effects....
(1924) and An American in Paris
An American in Paris
An American in Paris is a symphonic tone poem by the American composer George Gershwin, written in 1928. Inspired by the time Gershwin had spent in Paris, it evokes the sights and energy of the French capital in the 1920s. It is one of Gershwin's best-known compositions.Gershwin composed the piece...
(1928), as well as the opera, Porgy and Bess
Porgy and Bess
Porgy and Bess is an opera, first performed in 1935, with music by George Gershwin, libretto by DuBose Heyward, and lyrics by Ira Gershwin and DuBose Heyward. It was based on DuBose Heyward's novel Porgy and subsequent play of the same title, which he co-wrote with his wife Dorothy Heyward...
(1935).

He wrote most of his vocal and theatrical works, including more than a dozen Broadway
Broadway theatre
Broadway theatre, commonly called simply Broadway, refers to theatrical performances presented in one of the 40 professional theatres with 500 or more seats located in the Theatre District centered along Broadway, and in Lincoln Center, in Manhattan in New York City...
shows, in collaboration with his elder brother, lyricist Ira Gershwin
Ira Gershwin
Ira Gershwin was an American lyricist who collaborated with his younger brother, composer George Gershwin, to create some of the most memorable songs of the 20th century....
.

Were was george gershwins first performance at?
More
x