Encyclopedia
René Alexandre Arnoux is a retired French
France
The French Republic , The French Republic , The French Republic , (commonly known as France , is a unitary semi-presidential republic in Western Europe with several overseas territories and islands located on other continents and in the Indian, Pacific, and Atlantic oceans. Metropolitan France...
racing driver who is a veteran of 12 Formula One
Formula One
Formula One, also known as Formula 1 or F1 and referred to officially as the FIA Formula One World Championship, is the highest class of single seater auto racing sanctioned by the Fédération Internationale de l'Automobile . The "formula" designation in the name refers to a set of rules with which...
seasons (1978 to 1989). In 2006 he raced in the inaugural season of the Grand Prix Masters
Grand Prix Masters
Grand Prix Masters was a one-make motor racing series featuring retired Formula One drivers. The inaugural event, at the Kyalami circuit in South Africa, took place on 11–13 November, but the series folded after a 2 race season in 2006....
formula for retired F1 drivers.

European Formula Two
Formula Two
Formula Two, abbreviated to F2, is a type of open wheel formula racing. It was replaced by Formula 3000 in 1985, but the FIA announced in 2008 that Formula Two would return for 2009 in the form of the FIA Formula Two Championship...
champion in 1977, René Arnoux graduated to Formula One
Formula One
Formula One, also known as Formula 1 or F1 and referred to officially as the FIA Formula One World Championship, is the highest class of single seater auto racing sanctioned by the Fédération Internationale de l'Automobile . The "formula" designation in the name refers to a set of rules with which...
in 1978
1978 Formula One season
The 1978 Formula One season included the 29th FIA Formula One World Championship which commenced on January 15, 1978, and ended on October 8 after sixteen races. Mario Andretti was the season Champion and the last American to date to win a Formula One race...
, with the small French Martini
Martini (cars)
Martini Cars is a constructor of Formula racing cars from France, founded by Renato "Tico" Martini in 1965, when Martini and partner Bill Knight founded the Winfield Racing School at the Magny-Cours circuit...
team of Tico Martini. In an organisation with insufficient means to figure in the highest echelon of the sport, Arnoux was unable to demonstrate his abilities. Martini abandoned Formula One during the season, having run short of money. Arnoux found refuge at the end of the season at the Surtees
Surtees
The Surtees Racing Organisation was a race team that spent nine seasons as a constructor in Formula One, Formula 2, and Formula 5000.-History:...
team, but once again found himself in a team on the edge of failure. 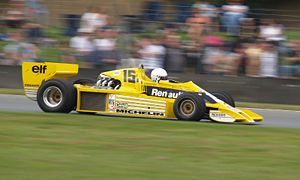 For the 1979 season
1979 Formula One season
The 1979 Formula One season was the 30th season of FIA Formula One motor racing. It featured the 1979 World Championship of F1 Drivers and the 1979 International Cup for F1 Constructors which were contested concurrently over a fifteen round series which commenced on January 21, 1979, and ended on...
, Arnoux joined the Renault
Renault F1
Lotus Renault GP, formerly the Renault F1 Team, is a British Formula One racing team. The Oxfordshire-based team can trace its roots back through the Benetton team of the late 1980s and 1990s to the Toleman team of the early 1980s. Renault had also competed in various forms since , before taking...
team, which entered two cars for the first time since its debut in 1977. The team's only victory of the year was taken by Arnoux's teammate Jean-Pierre Jabouille
Jean-Pierre Jabouille
Jean-Pierre Alain Jabouille is a former racing driver from France.-Biography:A native of Paris, Jabouille was one of the last of a breed of Formula One drivers who were also engineers....
at the French Grand Prix
1979 French Grand Prix
The 1979 French Grand Prix was a Formula One race held on 1 July 1979 at Dijon.It marked the first victory of a turbocharged car in Formula One, with Renault overcoming the reliability problems that had initially plagued their car...
at the Dijon-Prenois
Dijon-Prenois
Dijon-Prenois is a motor racing circuit located in Prenois, near Dijon, France. The undulating track is noted for its fast, sweeping bends....
circuit, but Arnoux took the headlines due to a fierce but good-natured wheel-banging battle with Gilles Villeneuve
Gilles Villeneuve
Joseph Gilles Henri Villeneuve, better known as Gilles Villeneuve , was a Canadian racing driver. An enthusiast of cars and fast driving from an early age, he started his professional career in snowmobile racing in his native province of Quebec...
for second place, where Arnoux took third.

During the 1989 Monaco Grand Prix
1989 Monaco Grand Prix
The 1989 Monaco Grand Prix was a Formula One race held at Monaco on May 7, 1989.- Race summary :The field was one fewer in Monaco as Ferrari had decided not to run a second car to replace Gerhard Berger, who was injured in an accident at Imola. Elsewhere Tyrrell had new cars that looked promising...
BBC
BBC
The British Broadcasting Corporation is a British public service broadcaster. Its headquarters is at Broadcasting House in the City of Westminster, London. It is the largest broadcaster in the world, with about 23,000 staff...
commentator Murray Walker
Murray Walker
Graeme Murray Walker, OBE is a former Formula One motorsport commentator...
remarked that Arnoux's reason for going so slow at that stage of his career is that he was used to turbo powered cars and that the naturally aspirated cars were a completely different kettle of fish. Walker's co-commentator, 1976 World Champion
1976 Formula One season
The 1976 Formula One season included the 27th FIA Formula One World Championship season, which commenced on January 25, 1976, and ended on October 24 after sixteen races...
James Hunt
James Hunt
James Simon Wallis Hunt was a British racing driver from England who won the Formula One World Championship in . Hunt's often action packed exploits on track earned him the nickname "Hunt the Shunt." After retiring from driving, Hunt became a media commentator and businessman...
's reply was typically blunt as he said "And all I can say to that is bullshit". Arnoux finished his career with 181 World Championship points.

René Arnoux has since started an indoor karting business called Kart'in, consisting of four tracks in France, two in the Parisian area, one in the suburbs of Lyons and one near Marseille. He also owns and manages two factories, frequently appears and drives in historical events on behalf of Renault and resides in Paris.

Arnoux was one of the drivers invited to take part in the Grand Prix Masters
Grand Prix Masters
Grand Prix Masters was a one-make motor racing series featuring retired Formula One drivers. The inaugural event, at the Kyalami circuit in South Africa, took place on 11–13 November, but the series folded after a 2 race season in 2006....
championship in 2006 and 2007, restricted to former Formula One drivers. In 2007 and 2008 he drives for the Renault H&C Classic Team, e.g. presents and drives Alain Prost
Alain Prost
Alain Marie Pascal Prost, OBE, Chevalier de la Légion d'honneur is a French racing driver. A four-time Formula One Drivers' Champion, Prost has won more titles than any driver except for Juan Manuel Fangio , and Michael Schumacher . From 1987 until 2001 Prost held the record for most Grand Prix...
's F1 car from 1983 at World Series by Renault
World Series by Renault
The World Series by Renault, formerly the World Series by Nissan from 1998 to 2004, is a motor racing series. The series consists of the flagship Formula Renault 3.5 Series , the Eurocup Formula Renault 2.0 and the Eurocup Mégane Trophy...
events.