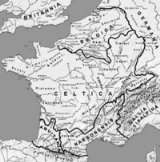 
The Remi were a Belgic
Belgae
The Belgae were a group of tribes living in northern Gaul, on the west bank of the Rhine, in the 3rd century BC, and later also in Britain, and possibly even Ireland...
tribe of north-eastern Gaul
Gaul
Gaul was a region of Western Europe during the Iron Age and Roman era, encompassing present day France, Luxembourg and Belgium, most of Switzerland, the western part of Northern Italy, as well as the parts of the Netherlands and Germany on the left bank of the Rhine. The Gauls were the speakers of...
(Gallia Belgica
Gallia Belgica
Gallia Belgica was a Roman province located in what is now the southern part of the Netherlands, Belgium, Luxembourg, northeastern France, and western Germany. The indigenous population of Gallia Belgica, the Belgae, consisted of a mixture of Celtic and Germanic tribes...
) in the 1st century BC. They occupied the northern Champagne
Champagne (province)
The Champagne wine region is a historic province within the Champagne administrative province in the northeast of France. The area is best known for the production of the sparkling white wine that bears the region's name...
plain, on the southern fringes of the Forest of Ardennes
Ardennes
The Ardennes is a region of extensive forests, rolling hills and ridges formed within the Givetian Ardennes mountain range, primarily in Belgium and Luxembourg, but stretching into France , and geologically into the Eifel...
, between the rivers Mosa (Meuse
Meuse
Meuse is a department in northeast France, named after the River Meuse.-History:Meuse is one of the original 83 departments created during the French Revolution on March 4, 1790...
) and Matrona (Marne
Marne
Marne is a department in north-eastern France named after the river Marne which flows through the department. The prefecture of Marne is Châlons-en-Champagne...
), and along the river valleys of the Aisne
Aisne River
The Aisne is a river in northeastern France, left tributary of the river Oise. It gave its name to the French département Aisne. It was known in the Roman period as the Axona....
and its tributaries the Aire
Aire (Aisne)
The Aire is a river in northern France, right tributary of the Aisne. Its source is near the village Saint-Aubin-sur-Aire. Its course crosses the départements of Meuse and Ardennes. It flows through the towns of Pierrefitte-sur-Aire, Clermont-en-Argonne, Varennes-en-Argonne and Grandpré, finally...
and the Vesle
Vesle
The Vesle is the river on which the city of Reims stands. It is a fourth order river of France and a left-bank tributary of the Aisne River. It is 140 kilometres long, rises in the département of Marne through which it flows most of its course.-Geography:...
.

Their tribal capital was at Durocortum (Reims
Reims
Reims , a city in the Champagne-Ardenne region of France, lies east-northeast of Paris. Founded by the Gauls, it became a major city during the period of the Roman Empire....
, France) the second largest oppidum
Oppidum
Oppidum is a Latin word meaning the main settlement in any administrative area of ancient Rome. The word is derived from the earlier Latin ob-pedum, "enclosed space," possibly from the Proto-Indo-European *pedóm-, "occupied space" or "footprint."Julius Caesar described the larger Celtic Iron Age...
of Gaul
Gaul
Gaul was a region of Western Europe during the Iron Age and Roman era, encompassing present day France, Luxembourg and Belgium, most of Switzerland, the western part of Northern Italy, as well as the parts of the Netherlands and Germany on the left bank of the Rhine. The Gauls were the speakers of...
, on the Vesle. Allied with the Germanic tribes of the east, they repeatedly engaged in warfare against the Parisii and the Senones
Senones
The Senones were an ancient Gaulish tribe.In about 400 BC they crossed the Alps and, having driven out the Umbrians settled on the east coast of Italy from Forlì to Ancona, in the so-called ager Gallicus, and founded the town of Sena Gallica , which became their capital. In 391 BC they invaded...
. They were renowned for their horses and cavalry. The Remi, under Iccius and Andecombogius, allied themselves with Julius Caesar
Julius Caesar
Gaius Julius Caesar was a Roman general and statesman and a distinguished writer of Latin prose. He played a critical role in the gradual transformation of the Roman Republic into the Roman Empire....
and remained loyal to him throughout the entire Gallic Wars, becoming the most pro-Roman
Ancient Rome
Ancient Rome was a thriving civilization that grew on the Italian Peninsula as early as the 8th century BC. Located along the Mediterranean Sea and centered on the city of Rome, it expanded to one of the largest empires in the ancient world....
of all the peoples of Belgic Gaul. 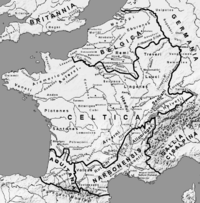 A founding myth
Founding myth
A national myth is an inspiring narrative or anecdote about a nation's past. Such myths often serve as an important national symbol and affirm a set of national values. A national myth may sometimes take the form of a national epic...
preserved or invented by Flodoard of Reims
Flodoard
-Biography:He was born at Épernay, and educated at Reims in the cathedral school which had been established by Archbishop Fulcon .As canon of Reims, and favourite of the archbishops Herivaeus and Seulfus -Biography:He was born at Épernay, and educated at Reims in the cathedral school which had...
(d. 966) makes Remus, brother of Romulus
Romulus and Remus
Romulus and Remus are Rome's twin founders in its traditional foundation myth, although the former is sometimes said to be the sole founder...
, the eponym
Eponym
An eponym is the name of a person or thing, whether real or fictitious, after which a particular place, tribe, era, discovery, or other item is named or thought to be named...
ous founder of the Remi, having escaped their fraternal rivalry instead of dying in Latium
Latium
Lazio is one of the 20 administrative regions of Italy, situated in the central peninsular section of the country. With about 5.7 million residents and a GDP of more than 170 billion euros, Lazio is the third most populated and the second richest region of Italy...
.