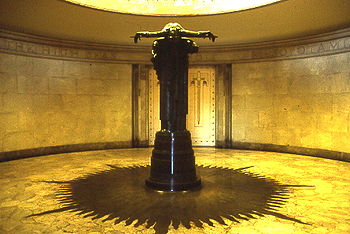 The expression "national estate" was first used by the British architect Clough Williams-Ellis
Clough Williams-Ellis
Sir Bertram Clough Williams-Ellis, CBE, MC was an English-born Welsh architect known chiefly as creator of the Italianate village of Portmeirion in North Wales.-Origins, education and early career:...
, and reached Australia in the 1970s. It was incorporated into the Australian Heritage Commission Act and is used to describe a collection of buildings and sites that are worthy of preservation for a variety of reasons. It covers natural environments as well as European history and Aboriginal culture.

Anyone can suggest that a certain site should be listed on the Register of the National Estate. A nomination form is provided and is then submitted to an expert group for evaluation. If a place is accepted for listing, the nomination is declared in the Commonwealth Gazette and newspapers. The Heritage Council eventually makes a decision after the public has had time to comment and raise possible objections. The listing, if it takes place, is based on an assessment of the values of the nominated place, whether "aesthetic, historic, scientific, or social significance, or other special value".

The Register of the National Estate was frozen in February 2007. It will continue until February 2012 but has been replaced by other heritage lists.