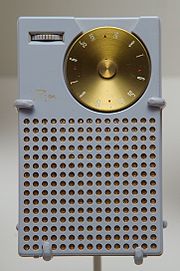 The Regency TR-1 was the first commercially sold transistor radio
Transistor radio
A transistor radio is a small portable radio receiver using transistor-based circuitry. Following their development in 1954 they became the most popular electronic communication device in history, with billions manufactured during the 1960s and 1970s...
.

Two companies working together, Texas Instruments
Texas Instruments
Texas Instruments Inc. , widely known as TI, is an American company based in Dallas, Texas, United States, which develops and commercializes semiconductor and computer technology...
of Dallas, Texas
Dallas, Texas
Dallas is the third-largest city in Texas and the ninth-largest in the United States. The Dallas-Fort Worth Metroplex is the largest metropolitan area in the South and fourth-largest metropolitan area in the United States...
and Industrial Development Engineering Associates (I.D.E.A.) of Indianapolis, Indiana
Indianapolis, Indiana
Indianapolis is the capital of the U.S. state of Indiana, and the county seat of Marion County, Indiana. As of the 2010 United States Census, the city's population is 839,489. It is by far Indiana's largest city and, as of the 2010 U.S...
, were behind the unveiling of the Regency TR-1, the world's first commercially-produced transistor radio. Previously, Texas Instruments was producing instrumentation for the oil industry and locating devices for the U.S. Navy, and I.D.E.A. built home television antenna boosters, but the two companies worked together on the TR-1, looking to grow revenues for their respective companies by breaking into this new product area. In May 1954, Texas Instruments had designed and built a prototype and was looking for an established radio manufacturer to develop and market a radio using their transistors. None of the major radio makers including RCA
RCA
RCA Corporation, founded as the Radio Corporation of America, was an American electronics company in existence from 1919 to 1986. The RCA trademark is currently owned by the French conglomerate Technicolor SA through RCA Trademark Management S.A., a company owned by Technicolor...
, Philco
Philco
Philco, the Philadelphia Storage Battery Company , was a pioneer in early battery, radio, and television production as well as former employer of Philo Farnsworth, inventor of cathode ray tube television...
, and Emerson
Emerson Electric Company
Emerson Electric Company is a major multinational corporation headquartered in Ferguson, Missouri, United States. This Fortune 500 company manufactures products and provides engineering services for a wide range of industrial, commercial, and consumer markets.Emerson is one of the largest...
were interested. The President of I.D.E.A. at the time, Ed Tudor, jumped at the opportunity to manufacture the TR-1, predicting sales of the transistor radios at "20 million radios in three years". The Regency TR-1 was announced on October 18, 1954 by the Regency Division of I.D.E.A., was put on sale in November 1954, and was the first practical transistor radio made in any significant numbers. One year after the release of the TR-1 sales approached the 100,000 mark. The look and size of the TR-1 was well received, but the reviews of the TR-1's performance were typically adverse. The Regency TR-1 is patented by Richard C. Koch, , former Project Engineer of I.D.E.A.

The circuit of the Regency TR-1 was refined from one originally designed by engineers from Texas Instruments
Texas Instruments
Texas Instruments Inc. , widely known as TI, is an American company based in Dallas, Texas, United States, which develops and commercializes semiconductor and computer technology...
, and reduced the number of parts required, including two expensive transistors. Although this severely reduced the audio output volume, it enabled the radio to be sold for only a small profit. The initial cost of the Regency TR-1 was $49.95 (the equivalent of roughly $400 in year-2010 dollars) and sold about 150,000 units.

The TR-1 used Texas Instruments' NPN transistors, hand-picked in sets of four. The radio was powered by a 22.5 volt battery, since the only way to get adequate radio frequency
Radio frequency
Radio frequency is a rate of oscillation in the range of about 3 kHz to 300 GHz, which corresponds to the frequency of radio waves, and the alternating currents which carry radio signals...
performance out of early transistors was to run them close to their collector-to-emitter breakdown voltage
Breakdown voltage
The breakdown voltage of an insulator is the minimum voltage that causes a portion of an insulator to become electrically conductive.The breakdown voltage of a diode is the minimum reverse voltage to make the diode conduct in reverse...
. The high rate of battery consumption made the TR-1 very expensive to run, and it was far more popular for its novelty or status value than its actual performance. This can be compared with the first MP3 players, which although technologically interesting, were very expensive, with only very limited storage capacity (as low as 32 megabytes) and consequently could only store a very limited number of tracks with indifferent sound quality.

The design of the Regency TR-1 was outsourced by I.D.E.A. to the industrial design firm of Painter, Teague and Petertil. The program was created within six weeks by way of telephone and design sketches exchanged through mail. The design won an award from the Industrial Design Society
Industrial Designers Society of America
Industrial Designers Society of America is an organization of professional industrial designers primarily in the United States. Recently IDSA has started chapters in Canada and in China...
of New York and was selected by the Museum of Modern Art
Museum of Modern Art
The Museum of Modern Art is an art museum in Midtown Manhattan in New York City, on 53rd Street, between Fifth and Sixth Avenues. It has been important in developing and collecting modernist art, and is often identified as the most influential museum of modern art in the world...
for the American Art and Design Exhibition in Paris
Paris
Paris is the capital and largest city in France, situated on the river Seine, in northern France, at the heart of the Île-de-France region...
in 1955. The TR-1 was initially offered in black, bone white, mandarin red, and cloud gray. It was later uncommonly offered in olive green and mahogany. Other later, rare colors included lavender, pearl white, turquoise, pink, and lime. It was advertised as being 3" x 5" x 1.25" and weighed 12 ounces, and used a 22.5 volt battery. The packaging consisted of a cardboard box and the color was stamped into the end. An optional earphone could be purchased for $7.50.

Regency began manufacturing the TR-1 on October 25, 1954. The manufacture was a collective effort of manufacturers around the country: The transistors and transformers came from Texas Instruments in Dallas. The capacitors came from International Electronics, Inc. of Nashville, Erie Electronics of Erie, Pennsylvania
Erie, Pennsylvania
Erie is a city located in northwestern Pennsylvania in the United States. Named for the lake and the Native American tribe that resided along its southern shore, Erie is the state's fourth-largest city , with a population of 102,000...
, and Centralab of Milwaukee, WI. The speakers came from Jensen
Jensen Loudspeakers
Jensen Loudspeakers is a company that manufactures speakers in many different models and sizes, originally located in Chicago, IL. They built a reputation during the 50's and 60's providing speakers used mainly in guitar and bass amplifiers. Though the American company is long gone, "reissue"...
of Chicago, Illinois. The IF transformer
Transformer
A transformer is a device that transfers electrical energy from one circuit to another through inductively coupled conductors—the transformer's coils. A varying current in the first or primary winding creates a varying magnetic flux in the transformer's core and thus a varying magnetic field...
s came from Vokar of Dexter, MI. The volume control came from the Chicago Telephone Supply of Elkhart, Indiana
Elkhart, Indiana
Elkhart is a city in Elkhart County, Indiana, United States. The city is located east of South Bend, northwest of Fort Wayne, east of Chicago, and north of Indianapolis...
. The tuning capacitor came from Radio Condenser Co. of Camden, New Jersey
Camden, New Jersey
The city of Camden is the county seat of Camden County, New Jersey. It is located across the Delaware River from Philadelphia, Pennsylvania. As of the 2010 United States Census, the city had a total population of 77,344...
. The Richardson Company of Melrose Park, Illinois
Melrose Park, Illinois
Melrose Park is a village in Cook County, Illinois, United States. It is a "near-in" suburb of Chicago. The population was 23,171 at the 2000 census. Melrose Park has long been home to a large Italian-American population, though now it is majority Mexican-American. It was the home of Kiddieland...
and Indianapolis supplied the circuit board material to Croname of Chicago, IL who manufactured the circuit boards. The actual plastic case for the TR-1 was produced by Argus Plastics of Indianapolis, Indiana.