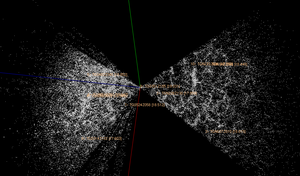 In astronomy
Astronomy
Astronomy is a natural science that deals with the study of celestial objects and phenomena that originate outside the atmosphere of Earth...
, a redshift survey, or galaxy survey, is a survey
Astronomical surveys
An astronomical survey is a general map or image of a region of the sky which lacks a specific observational target. Alternatively, an astronomical survey may comprise a set of many images of objects which share a common type or feature...
of a section of the sky to measure the redshift
Redshift
In physics , redshift happens when light seen coming from an object is proportionally increased in wavelength, or shifted to the red end of the spectrum...
of astronomical objects. Using Hubble's law
Hubble's law
Hubble's law is the name for the astronomical observation in physical cosmology that: all objects observed in deep space are found to have a doppler shift observable relative velocity to Earth, and to each other; and that this doppler-shift-measured velocity, of various galaxies receding from...
, the redshift can be used to calculate the distance of an object from Earth. By combining redshift with angular position data, a redshift survey maps the 3D distribution of matter within a field of the sky. These observations are used to measure properties of the large-scale structure of the universe. The Great Wall
Great Wall (astronomy)
The Great Wall , sometimes specifically referred to as the CfA2 Great Wall, is one of the largest known super-structures in the Universe...
, a vast conglomeration of galaxies over 500 million light-years wide, provides a dramatic example of a large-scale structure that redshift surveys can detect.

The most notable, recent and low-redshift surveys are the 2dF Galaxy Redshift Survey
2dF Galaxy Redshift Survey
In astronomy, the 2dF Galaxy Redshift Survey , 2dF or 2dFGRS is a redshift survey conducted by the Anglo-Australian Observatory with the 3.9m Anglo-Australian Telescope between 1997 and 11 April 2002. The data from this survey were made public on 30 June 2003...
, Sloan Digital Sky Survey
Sloan Digital Sky Survey
The Sloan Digital Sky Survey or SDSS is a major multi-filter imaging and spectroscopic redshift survey using a dedicated 2.5-m wide-angle optical telescope at Apache Point Observatory in New Mexico, United States. The project was named after the Alfred P...
and the Galaxy And Mass Assembly survey
Galaxy And Mass Assembly survey
The is a project to exploit the latest generation of ground-based wide-field survey facilities to study cosmology and galaxy formation and evolution. GAMA will bring together data from a number of world class instruments:* The Anglo-Australian Telescope ,...
. At high redshift there exist the DEEP2 Redshift Survey
DEEP2 Redshift Survey
The DEEP2 Survey or DEEP2 is a Redshift survey of the Redshift~1 universe. It uses the Keck telescopes to measure the spectra and hence redshifts of approximately 60,000 galaxies....
and the VIMOS-VLT Deep Survey (VVDS).

Because of the demands on observing time required to obtain spectroscopic redshifts (i.e., true redshifts measured by velocity), it has become commonplace to use photometric redshift
Photometric redshift
A photometric redshift is an estimate for the distance of an astronomical object, such as a galaxy or quasar. The technique uses photometry to determine the redshift, and hence, through Hubble's...
s, http://astrowww.phys.uvic.ca/grads/gwyn/pz/index.html based on brightness. Such "redshifts" can be used in surveys and to find the space distribution of galaxies, provided the galaxy types are well known, but, obviously they cannot be used to define points on the Hubble curve, because of circular reasoning.