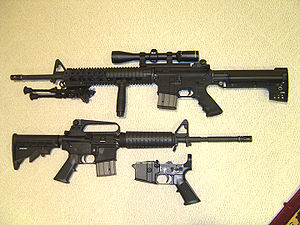 In firearm
Firearm
A firearm is a weapon that launches one, or many, projectile at high velocity through confined burning of a propellant. This subsonic burning process is technically known as deflagration, as opposed to supersonic combustion known as a detonation. In older firearms, the propellant was typically...
s terminology, the receiver is the part of a firearm that houses the operating parts. The receiver usually contains the bolt carrier group, trigger group, and magazine port. In most handguns, the receiver, or frame, holds the magazine well or rotary magazine as well as the trigger mechanism. It is sometimes called the body of the firearm, while in the context of handguns (revolvers and pistols), it is often called the frame. It is often made of forge
Forge
A forge is a hearth used for forging. The term "forge" can also refer to the workplace of a smith or a blacksmith, although the term smithy is then more commonly used.The basic smithy contains a forge, also known as a hearth, for heating metals...
d, machined or stamped steel or aluminum; in addition to these traditional materials, modern science and engineering have introduced polymers and sintered
Sintering
Sintering is a method used to create objects from powders. It is based on atomic diffusion. Diffusion occurs in any material above absolute zero, but it occurs much faster at higher temperatures. In most sintering processes, the powdered material is held in a mold and then heated to a temperature...
metal powders to receiver construction.
In strictly legal terms, in the United States the receiver is the actual firearm itself, and as such it is the controlled part (without which operation is impossible). Generally, the law views the receiver as that part of a firearm housing that has the serial number
Serial number
A serial number is a unique number assigned for identification which varies from its successor or predecessor by a fixed discrete integer value...
upon it. Thus, in the case of a firearm that has multiple receivers (such as the AR-15
AR-15
The AR-15 is a lightweight, 5.56 mm, air-cooled, gas-operated, magazine-fed semi-automatic rifle, with a rotating-lock bolt, actuated by direct impingement gas operation. It is manufactured with the extensive use of aluminum alloys and synthetic materials....
, which has an upper and lower receiver), the legally controlled part is the one that is serialized (the lower, in the AR-15's case).
The source of this article is wikipedia, the free encyclopedia.  The text of this article is licensed under the GFDL.