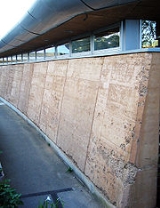 Rammed earth, also known as taipa (Portuguese), tapial (Spanish), and pisé (de terre) (French), is a technique for building
Construction
In the fields of architecture and civil engineering, construction is a process that consists of the building or assembling of infrastructure. Far from being a single activity, large scale construction is a feat of human multitasking...
walls using the raw materials of earth
Soil
Soil is a natural body consisting of layers of mineral constituents of variable thicknesses, which differ from the parent materials in their morphological, physical, chemical, and mineralogical characteristics...
, chalk
Chalk
Chalk is a soft, white, porous sedimentary rock, a form of limestone composed of the mineral calcite. Calcite is calcium carbonate or CaCO3. It forms under reasonably deep marine conditions from the gradual accumulation of minute calcite plates shed from micro-organisms called coccolithophores....
, lime and gravel
Gravel
Gravel is composed of unconsolidated rock fragments that have a general particle size range and include size classes from granule- to boulder-sized fragments. Gravel can be sub-categorized into granule and cobble...
. It is an ancient building method that has seen a revival in recent years as people seek more sustainable
Sustainability
Sustainability is the capacity to endure. For humans, sustainability is the long-term maintenance of well being, which has environmental, economic, and social dimensions, and encompasses the concept of union, an interdependent relationship and mutual responsible position with all living and non...
building material
Building material
Building material is any material which is used for a construction purpose. Many naturally occurring substances, such as clay, sand, wood and rocks, even twigs and leaves have been used to construct buildings. Apart from naturally occurring materials, many man-made products are in use, some more...
s and natural building
Natural building
A natural building involves a range of building systems and materials that place major emphasis on sustainability. Ways of achieving sustainability through natural building focus on durability and the use of minimally processed, plentiful or renewable resources, as well as those that, while...
methods. Rammed-earth walls are simple to construct, noncombustible, thermally massive
Thermal mass
Thermal mass is a concept in building design which describes how the mass of the building provides "inertia" against temperature fluctuations, sometimes known as the thermal flywheel effect...
, strong, and durable.

I need to know how i would test my earth mix for the correct consistency? thank you.

Hi everyone I am planning a rammed earth house. Because my Block is on a hill, I will cut in it, build a bassement with retaining walls and a suspe...
More
x