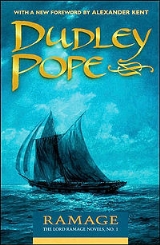 Lord Ramage is the third lieutenant on His Majesty's ship Sibella, but assumes command when the Captain, and the First and Second Lieutenants are killed by fire from a French ship. The French ship had fatally crippled the Sibella and had killed over half of her crew. As the new Captain, Ramage decides to abandon the sinking ship. He leaves the injured on the deck to be taken prisoner by the French and hopefully treated by their surgeon. Before he abandons the ship, Ramage retrieves some documents and the late Captain's last orders. The remaining crew then loads into the four lifeboats and rows away. As they are rowing away, the crew of the French ship set the Sibella on fire after taking the injured off.

Ramage opens Sir John Jervis
John Jervis, 1st Earl of St Vincent
Admiral of the Fleet John Jervis, 1st Earl of St Vincent GCB, PC was an admiral in the Royal Navy and Member of Parliament in the United Kingdom...
's orders of the late Captain of the Sibella. The orders read that the Sibella was on a reconnaissance missions to extricate the Marchessa di Volterri along with five other nobles including the Marchessa's two cousins. Ramage decides to go through with the rescue. He takes the captain's gig
Captain's Gig
The captain's gig is a boat used on naval ships as the captain's private taxi. It is a catchall phrase for this type of craft and over the years it has gradually increased in size, changed with the advent of new technologies for locomotion, and been crafted from increasingly more durable...
with several topmen
Topman
TOPMAN is the stand-alone fashion business counterpart of Topshop that caters exclusively to men’s clothing. A part of the Arcadia Group, which also owns Burton, Miss Selfridge, Wallis, Evans, British Home Stores and Dorothy Perkins, Topman has a chain of high-street men's clothing stores located...
and the former Captain's coxswain
Coxswain
The coxswain is the person in charge of a boat, particularly its navigation and steering. The etymology of the word gives us a literal meaning of "boat servant" since it comes from cox, a coxboat or other small vessel kept aboard a ship, and swain, which can be rendered as boy, in authority. ...
, Jackson, to complete the orders. They land upon Monte Argentario
Monte Argentario
Monte Argentario is a comune and a peninsula belonging to the Province of Grosseto in the Italian region Tuscany, located about 150 km south of Florence and about 35 km south of Grosseto...
and find the Marchessa with the help of a local charcoal maker.

Ramage rescues the Marchessa and one of her cousins, Count Pisano. They are soon picked up by the Lively under the command of Captain Probus. That night Pisano accuses Ramage of cowardice, submitting a formal accusation to Probus. During their time together, the Marchessa and Ramage develop a Romeo-and-Juliet-esque relationship, with the conniving of her family and the demands of discretion upon them.

After the Marchessa is returned, Ramage is sent to trial according to the Articles of War
Articles of War
The Articles of War are a set of regulations drawn up to govern the conduct of a country's military and naval forces. The phrase was first used in 1637 in Robert Monro's His expedition with the worthy Scots regiment called Mac-keyes regiment etc. and can be used to refer to military law in general...
for his loss of the Sibella. Captain Croucher, a political enemy of Ramage's father, brings the accusation of cowardice into the trial. Ramage's trial is interrupted by Lord Nelson's arrival, effectively ending the trial. Nelson gives him the command of the cutter Kathleen sending him to rescue the crew of the frigate HMS Belette which had run aground. Ramage saves the stranded crew and returns to Nelson. Upon his return, he learns that Count Pitti, who he had been unable to rescue had not been killed, but instead escaped. The book ends as Ramage considers his commands to carry the Marchessa to Gibraltar
Gibraltar
Gibraltar is a British overseas territory located on the southern end of the Iberian Peninsula at the entrance of the Mediterranean. A peninsula with an area of , it has a northern border with Andalusia, Spain. The Rock of Gibraltar is the major landmark of the region...
.

Many reviewers, such as the New York Times, praised Ramage as "A grand tale written with panache, glitter and awesome authority, one can only rejoice that a crying need has been filled".

In response to the novel, Orville Prescott wrote that "Dudley Pope has kept his story scudding along before a fine wind," and "Therewith predict that Lieut. Nicholas Ramage, commander of His Majesty's cutter Kathleen, will enjoy a highly successful career and survive some of the most perilous adventures experienced by any British naval officer in the entire history of the Napoleonic Wars."