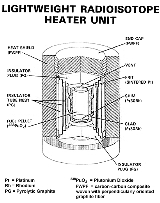 In spacecraft RHUs are necessary to heat critical components and subsystems. RHUs also reduce spacecraft complexity, by making heater subsystems unnecessary. By having as few heating subsystems as possible, the overall complexity of the spacecraft can be reduced.

RHUs provide local heat to sensitive equipment in deep space. While both RHUs and RTGs use the decay heat of a radioactive isotope (usually Pu-238), RHUs are generally much smaller and omit the thermocouples and heat sink/radiators required to generate electricity from heat. Both feature rugged, heat-resistant casings to safely contain the radioisotope in the event of a launch vehicle failure or an accidental collision with the earth from deep space.

Virtually every deep space
Outer space
Outer space is the void that exists between celestial bodies, including the Earth. It is not completely empty, but consists of a hard vacuum containing a low density of particles: predominantly a plasma of hydrogen and helium, as well as electromagnetic radiation, magnetic fields, and neutrinos....
mission beyond Mars
Mars
Mars is the fourth planet from the Sun in the Solar System. The planet is named after the Roman god of war, Mars. It is often described as the "Red Planet", as the iron oxide prevalent on its surface gives it a reddish appearance...
uses both RHUs and RTGs. Solar insolation
Insolation
Insolation is a measure of solar radiation energy received on a given surface area in a given time. It is commonly expressed as average irradiance in watts per square meter or kilowatt-hours per square meter per day...
decreases with the square of the distance from the Sun
Sun
The Sun is the star at the center of the Solar System. It is almost perfectly spherical and consists of hot plasma interwoven with magnetic fields...
so additional heat is needed to keep spacecraft components at nominal operating temperature
Operating temperature
An operating temperature is the temperature at which an electrical or mechanical device operates. The device will operate effectively within a specified temperature range which varies based on the device function and application context, and ranges from the minimum operating temperature to the...
. Some of this heat is produced electrically because it is easier to control, but electrical heaters are far less efficient than a RHU because RTGs convert only a few percent of their heat to electricity and reject the rest to space.

Most lunar and Martian surface probes use RHUs for heat, including many probes that use solar panels rather than RTGs to generate electricity. Examples include the early ALSEP seismometer deployed on Apollo 11; Mars Pathfinder
Mars Pathfinder
Mars Pathfinder was an American spacecraft that landed a base station with roving probe on Mars in 1997. It consisted of a lander, renamed the Carl Sagan Memorial Station, and a lightweight wheeled robotic rover named Sojourner.Launched on December 4, 1996 by NASA aboard a Delta II booster a...
; and the Mars Exploration Rovers Spirit and Opportunity. RHUs are especially useful on the moon because of its very long and cold 2-week night.

The Cassini–Huygens spacecraft at Saturn
Saturn
Saturn is the sixth planet from the Sun and the second largest planet in the Solar System, after Jupiter. Saturn is named after the Roman god Saturn, equated to the Greek Cronus , the Babylonian Ninurta and the Hindu Shani. Saturn's astronomical symbol represents the Roman god's sickle.Saturn,...
contains 82 of these units (in addition to three main RTGs for power generation); the associated Huygens probe contains 35. The total mass of a single RHU (including shielding) is about 40 grams. Similar schemes such as thermo-ionic generators have also been used.

These GPHSes can be used singly or in groups of up to eighteen for component heating and sources for RTGs.